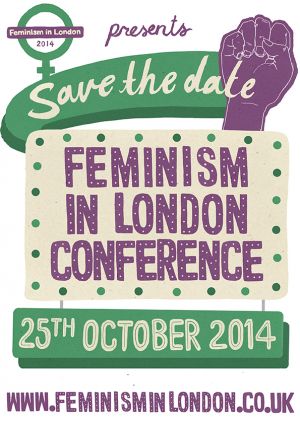 A guest post by the Feminism in London (FIL) organisers in response to SWOU’s . Earlier this week, SWOU critiqued FIL’s lack of current sex workers on their sex worker panel “Intersecting Oppressions in the Sex Industry”.

Please note: There are many perspectives over sex work and as such TFW currently does not have a policy on sex workers and feminism. Trigger warning as this post has some general statistics on sex workers.

Moderator’s note:(27/09/2014):Thanks to SWOU for getting in touch with the correction regarding their members.

We agree that panels on the sex industry, presented exclusively by academics and theoreticians with nobody who has direct experience of the issues, are problematic – but ours is not one of them. We are happy to clarify below that our panel has two exited women and two women who work with those currently involved in the sex industry.

Feminism in London isn’t intending to represent the entire spectrum of the sex industry in a single 90 minute panel session. That would be neither possible nor desirable. What we are looking at, specifically, are intersecting oppressions within it, and we believe that two women who have direct experience of it combined with two women who assist women currently involved in the sex industry, are able to provide this. We don’t think that it is controversial to say that oppression exists in this industry.

The panel is headed up by the well known and respected Pierrette Pape (coordinator of EWL), who will be chairing rather than presenting, and comprises four women who have direct experience of working in or alongside the sex industry. Two of them are women who have exited prostitution (we use their preferred term) and two are women who head up organisations providing assistance to women currently involved in the sex industry. One is Dorcas Erskine from the Poppy Project which helps women who have been trafficked to the UK for sexual exploitation and the other is Ifeoma Eze from Femage World which offers empowerment to black and minority ethnic women in the West Midlands including support out of poverty and through the criminal justice system. We find it difficult to believe that anybody would work against these aims.

The women who engage with the Poppy Project and with Femage World do not have their own blogs or Twitter accounts. They do not advertise online, or have columns in the Telegraph. They are struggling against an institutionally racist system which demonises migrant women as liars who will make up stories to gain the right to remain in the UK, and an institutionally sexist system which demonises all women as liars who ‘cry rape’ and are not reliable witnesses to their own abuse. One more oppression which they face is pressure to testify – to the Home Office, to the police, to the courts, to an insatiably curious public – and we are not prepared to demand that of women who need time and space to heal. It is for that reason that after much thought we decided that their voices would be represented through Dorcas and Ifeoma. We trust that nobody is suggesting that either of those speakers are fabricating stories, because that would be a fundamentally anti-feminist position.

We see no reason why this panel, all of whom, we emphasise, have direct experience of oppression in the sex industry, shouldn’t be treated with the respect they deserve: two as experts on their own experiences and two as amplifiers of the voices of the women they work with.

We have much in common with SWOU and where we disagree we would hope to do so respectfully. We both firmly oppose the criminalisation of women who work in the sex industry. We condemn police brutality, state violence and criminal prosecution of women. We, like them, believe that women need support if they wish to exit prostitution, and that class, race, poverty, criminalisation, education and many other factors affect women’s experiences of the sex industry. Where those factors create misery and exploitation, we are sure that no feminist would argue that these voices should not be heard.

SWOU suggest that we find the voices of current sex workers untrustworthy. Nothing could be further from the truth and in writing this piece, our aim is to demonstrate that our speakers have direct experience of their subject and that the voices of women currently involved in the sex industry are powerfully heard through those who work with them.

Feminism in London also recognises that it would be wildly inappropriate to have an opposite point of view represented on this panel – any more than SWOU’s own workshops on marketing or website editing should have to be presented by a victim of trafficking for balance. We would no more suggest people boycott them for choosing appropriate presenters for their own panel discussions than we appreciate their suggestion of the same happening to us. Nobody would expect to hear from a contented Eton schoolboy discussing how much he loves boarding in the context of a panel discussion on the experiences of abuse within the approved school system in the 1960s, and likewise we have panelists who are able to speak to experiences of intersecting oppressions because that is what this particular panel is about.

We have also been asked to clarify why we are focusing on oppression. That’s a question feminists are asked in numerous different contexts: “Why do you always focus on the negatives? Why are you always banging on about rape and DV, rather than looking at positive, consensual relationships? Why must you go on about equal pay when you have equal opportunities? Why are you moaning about abortion access when you have the Pill? And isn’t Page 3 just the same as the Diet Coke Man?” These are criticisms we’ve all heard, repeatedly. And the answer is the same to all of them: because we expect more. We will not make do with half-equality, and brush the rest under the carpet – the “I’m alright Jill” attitude that so often means that the most privileged women forge ahead, leaving their less privileged sisters in their wake.

In the context of this particular workshop, we are looking at the nasty underbelly of oppression, and that means that we are unapologetically focusing on the negatives, and not on the experiences of people who have enjoyed sex work – we don’t doubt them, but they are not the focus this time. [Moderator’s note (27/09/2014): This does not consider the other members of SWOU who are survivors of violence, including in the workplace, and those who work (or have worked) in unsafe, exploitative spaces, out of financial necessity]. We will be examining the factors surrounding oppression: according to the most recent Home Office figures, 70% of women involved in street prostitution have been in care. Over half began while children themselves, the average age of entry was fifteen. Just under half had a background of childhood sexual abuse. Over 80% are problematic drug users. The majority of the women working in parlours were migrant workers. Spin it how you like; the fact remains that poverty, abuse, racism, a failing care system and a culture of disbelief of women intersect to create a deeply disturbing picture and one which we feel should be heard. These are the women Dorcas and Ifeoma work with; these are the experiences Rachel and Tanja speak to.

There are some people who simply do not want to hear about oppression in the sex industry. This panel has five speakers and is only one of many; the conference has a massive array of panels with sixty amazing speakers. We don’t expect everyone to agree with every speaker at the event – we are running a conference, not an echo chamber – and we welcome debate. Debate is easier, however, when speakers are not being hounded into refusing to attend because one organisation doesn’t like one of our workshops.

In terms of safety and accessibility, we aim to be as accessible as possible. We have a quiet space for neurodivergent conference-goers and both a quiet space and a “Red Tent” area for anybody who feels triggered and wants time out. We will do everything we can to assist with disability access needs. We have a free creche and free workshops for under twelves to enable women with children to attend, and we have an “early bird” ticket policy to ensure that there are a limited number of more affordable tickets for those on lower incomes. We operate a safer space policy to recognise that while we cannot guarantee that every space is 100% safe for every possible combination of factors (trypanophobes would do well to avoid the craftivism panel) we will do our best to ensure that there are alternative workshops available, quiet space, and volunteers to assist if needed. The FiL committee can be contacted at feminisminlondon2014 at gmail dot com and while we will not answer abusive emails we will be happy to clarify any remaining points.

The photo above is the Feminism in London conference banner taken from their website.