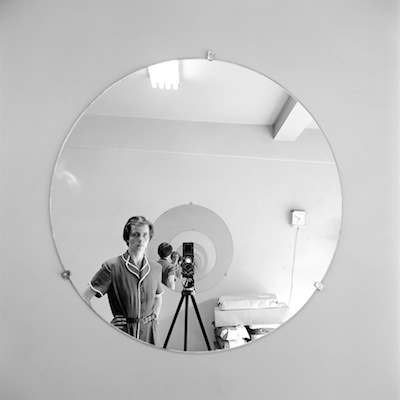 “What was Vivian Maier’s motivation for taking thousands of photographs of people in the streets of Chicago? Why did she never seek a wider audience to see her beautiful images? Who should be profiting from her belated success? These are some of the questions raised, but only partially answered, by the 2013 documentary Finding Vivian Maier directed by John Maloof and Charlie Siskel.

The film reveals an intriguing tale of a Chicago nanny and prolific street photographer who captured fascinating snaps of daily life but never pursued or received recognition for her work during her lifetime.”

The picture is black and white self-portrait by Vivian Maier in front of a round mirror, with the image repeated ad infinitum.