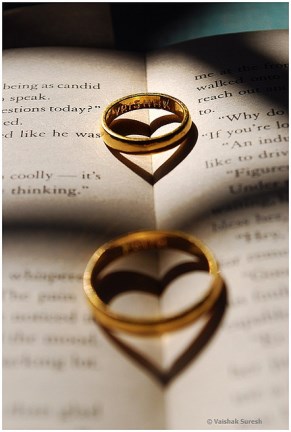 I inherited a plain rose gold ring on my 15th birthday. The only finger it fit on was the fourth digit of my left hand. I imagine that’s the only finger my Victorian ancestor wore it on in their lifetime. Such is the cultural association with a loop of inert metal.

I was pretty amazed what wearing a ring on my ‘wedding’ finger did. I have never been refused service at a bar or needed to prove my age when buying alcohol. I also got served quicker than non-ringed people, so I imagine I was considered a mature adult and took priority in the servers’ eyes. Marriage = maturity – you’ve played the expected romance game and won.

No strangers at said bars ever offered to buy me a drink. As my friends were also teenagers, people assumed I was their responsible adult and sometimes people commented my friends took after their father as none of them looked like me. I’m into shows about time travel but underage mothers are not usually greeted with “Your kids don’t look like you.”

Thankfully, no one ever questioned why I went to bars on my own. They already believed that I could do things independently of my spouse. My imaginary spouse. I’m in no hurry to correct people about what the ring signifies to them. As an aromantic asexual, it’s a relief. As a young teenager, the first “no” wasn’t sufficient for people asking me out on dates. I suppose the ring says no in a permanent way.

I like the power The One Ring has over how other people treat me. I also like that it helps people relax and be themselves. Not being concerned about pursuing or receiving romance or sex takes a huge strain off people.

There are two instances when I don’t wear the ring. The first is holding my camera, as it catches on the equipment. The second is going swimming as prescribed by my GP. No one has asked me on a date when I’m holding a camera – this might be because most people are self-conscious when the camera is pointing in their direction.

People have had a romantic interest in me when I’ve been swimming. I was surprised by this as it’s a disabled only swimming session and a lot of disabled people I know lament at how hard it is to find romance and sex with others. I suspect people mistake me for the carer rather than the grey haired person who helps me swim.

The first romantic ship that sailed was a member of staff on poolside. We had chatted twice a week, every week for two months and had a lot in common. One day, they asked me if I wanted to go for a drink, and I said yes, thinking it would be nice to chat while dry. It was when I waited for them at reception to discuss a meeting time that they saw the ring and said “sorry”. Sorry for what? Sorry for wanting to chat with someone with common interests whilst drinking something that isn’t pool water? Nope, sorry that they had romantic intentions. I only saw them once after that and then I found out they had transferred to another pool. I wondered if it was because they thought they could only know me romantically or not at all.

The second boat that sank was a newcomer to the pool. I was invited to a buffet dinner, cups of tea in the café and had offers of lifts to the shops for food and other generous things. Due to my disability, I rely on the kindness of others to do stuff and for me this was other disabled people rallying skills. Nope. The romance alarm went off with the repeated referral to me as parts of a plant and it was confirmed when I was in the café area with a cup of tea and my ring – “sorry”. They still come to the pool but all offers of dinner, tea and lifts to shops and doctors’ appointments have been retracted. Do we really only help people if there is a romantic reward?

I’m pleased to report that I needed to provide identification to prove I was old enough to buy a National Lottery ticket this year. I’d forgotten to wear my ring to hobble down to the shops for my annual treat and people think I’m 15. We have come full circle.

Image is of two plain gold rings resting in the centre of an open book, the shadows cast by the rings on the book look like hearts. It was uploaded by Flickr user Vaishak Suresh and has been shared under the Creative Commons Licence.