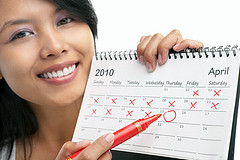 Let’s get one thing straight – apps cannot predict when you are fertile or when you will get your period. Somewhere along the line, our growing enthusiasm for period tracker apps has caused us to talk like technology can somehow independently figure out our menstrual cycles via algorithm alone. The thing is – that’s just a modern, digitized version of the rhythm method and I’m pretty sure most of us know the rhythm method does not work and should not be trusted.

The uproar surrounding Apple forgetting to integrate menstrual cycle data as part of its new Health app shows that we are getting to a point of accepting periods as a normal, natural part of life and maybe even seeing them as an important indicator of good health. But it also shows how we have accepted apps as our saviors when it comes to managing the previously thought unpredictable, tempestuous, anxiety-provoking female body. It’s great to see women interested in their menstrual cycles, but not if it’s only compounding the menstrual taboo. Much of the coverage of Apple’s failing suggested such data is only useful insofar as women can avoid staining their jeans in public (thanks, The Verge). Yet, seeing the need for it to be included in an app for ‘Health’ at all is a great start.

For April Fool’s Day TechCrunch published a satirical news item on a new phone app – ‘Pokr’ or ‘The Dongle That Touches Your Cervix So You Don’t Have To.’ Pokr is a blue, plastic finger that connects via your phone with apps like Glow and Clue. The woman puts the finger in her vagina and it tests the consistency of her cervical mucus. The post notes that these apps cannot accurately support what is known as the fertility awareness method or natural family planning if they don’t have women input data themselves every day, including basal body temperature and cervical mucus consistency. Only then will the app have a chance of helping you know when you are fertile and when you will get your period. Without the presence of cervical mucus, you cannot get pregnant. But, will women be okay with checking their cervical mucus? The post suggests Pokr can help those with busy schedules and the squeamish get the job done.

Like all the best satire it’s not so far-fetched what with technology like the OvuRing, a vaginal ring that detects your temperature and sends the information to your phone, and the wireless-connected Smart Diaphragm that monitors changes in the cervix during pregnancy.

Period tracker apps that don’t ask for this data – basal body temperature, cervical mucus consistency – and suggest or provide ways to learn how to interpret these three variables are misleading women. There is a calendar-based method, named Standard Days, which has a high effectiveness rate for perfect use, but it requires you consider 12 days of your cycle as fertile days and take precautions. Most apps, aside from Cycle Beads, appear to “predict” much shorter fertility windows, leaving women with too much trust in the tech with a big window of opportunity for an unwanted pregnancy. If you’re checking your temperature and cervical mucous accuracy increases and therefore the length of your fertile window decreases.

The problem with apps attempts to predict your fertile window or the timing of the appearance of your period is there are many things that can delay ovulation and therefore change the window and your period. Things like diet, sleep patterns, illness, some medications, stress. For example, one month I had a terrible UTI and had to take antibiotics. I did not ovulate until the day after I stopped the antibiotics and was well again – some five days after I might have “predicted” I would ovulate on my otherwise regular cycle. Not telling women this seems like it might lead to way more stress than the app is offering to counter.

Two German exports are currently encouraging body literacy – one is the Berlin-based app Clue and another is a movie released last month, Wetlands. Whatever you think of the protagonist Helen, she is extremely body literate, making observations about her cervical mucus and her menstrual blood throughout the book and the film adaptation. I came across the book when I was coming off the Pill after ten years and it was perfect timing as it introduced me to the reality of the fertile body – with all of its secretions – in a humorous and challenging way. The film begins with Helen discussing the changes in her cervical mucus as she uses the bathroom.

Helen gets herself sterilized in her late teens and so she does not need to monitor her body to know when she is fertile. However, she knows that these bodily fluids, how they appear and when they appear, can provide indication of your overall health, regardless. At first she worries that her cervical mucus is a sign of an infection she’s picked up from her body experimentation – something a lot of women are led to think in their teens and twenties. Her doctor lets her know that’s not the case and it’s normal. When she reads up about it alone she finds that normal cervical secretions are the reason women are told to wear perfumed panty liners and douche every day. However, she reports, joyfully, that this is the wrong message:

“It was the result of a healthy, very active, slime-producing mucous membrane.”

Clue does not present itself as a means to optimize your chances of getting pregnant, like Glow, or a means by which you might avoid pregnancy either, but rather as a health app. In Clue, cervical mucus is just called “fluid” and that fluid comes in four consistencies to choose from. The site tells users to learn more from the book ‘Taking Charge of Your Fertility’ before trying to interpret their fluid.

Both Clue and Wetlands promote the idea of communication between a woman and her body, rather than domination or management. The discussion around the Apple Health app makes management the primary goal of monitoring menstrual metrics, which suggests it’s a woman’s responsibility to keep track of her bodily fluids, but not too intimately, for the sake of avoiding surprises. For The Verge, being able to avoid a stain on your jeans is “revolutionary,” but there’s more hope for revolution in women seeing they can like, listen to, and learn from their bodies, with or without an app.

The image above illustrates a woman with a red marker crossing off days on a calendar. Thanks TipsTimesAdmin for the photo.