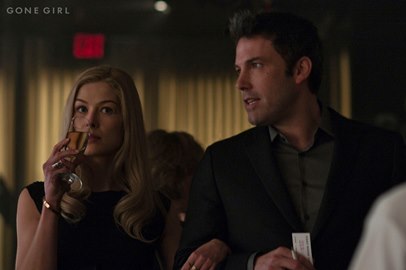 It is virtually impossible to review either Gillian Flynn’s novel Gone Girl or its film adaptation by David Fincher (also based on Flynn’s screenplay) without major spoilers.

That’s why we’re publishing a review of the film by Lily Kendall only now: I hope most of you have seen the film and most of those who haven’t are not planning to, for whatever reason.

The film did really well at the global box office but its critical reception, especially in the circles claiming some feminist credentials, was mixed. In her review, Lily weighs most popular arguments in the debate around the story of Amy and Nick and offers her take on the film’s message.

Read Lily’s review and share your thoughts on the film.

Picture is taken from the GG official FB fanpage. It is of Rosamund Pike as Amy Dunne and Ben Affleck as Nick, with her drinking champagne.