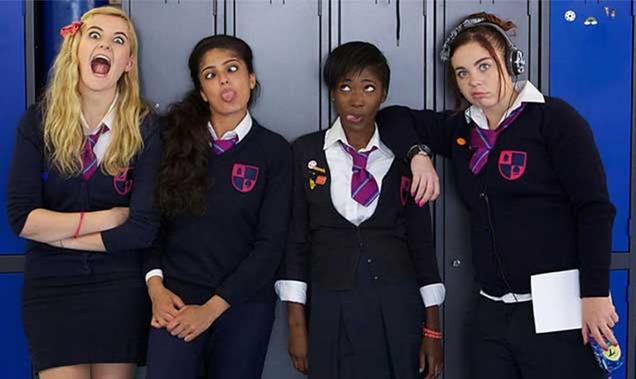 Finally, the girls are centre stage

Bernadette Davis herself has said of the show:

As far as I know, there aren’t any other comedies about girls of this age. Inbetweeners has shown what a rich area for comedy this age group is — but girls are very different and I thought they should have their own show.

Set in the fictional Greenshoots Academy in South London, the series is advertised as “a comedy about the kind of girls more usually seen in worrying documentaries about inner city teens”. Just like by Davis above, the series is often compared to E4’s The Inbetweeners due to the similarities in format — four friends trying to navigate school while dealing with their burgeoning sexuality — and the use of visual humour, snappy one-liners and witty dialogue. However, there is one main difference between the two: while The Inbetweeners perpetuates lad culture and portrays women as little more than sex objects and vehicles to further the protagonists’ storylines, Some Girls not only features a female-led cast but also champions female sexuality in a naturalistic, realistic manner.

The show doesn’t bypass representations of class or multiculturalism

The protagonists of Some Girls subvert the usual innocent naïve teenage girl stereotype by talking as frankly, unpretentiously and sometimes crudely about their sex lives as their male counterparts. There is a particularly memorable extract in season one where Amber vocally demonstrates her current partner’s especially quirky orgasm to her friends, which they then try to mimic themselves – definitely a scene not too dissimilar from my own experience as part of a clique of teenage girls in secondary school.

These young women are also not as privileged as their middle-class counterparts. The show is set on a council estate and our narrator Viva (Adelayo Adedayo) focuses as much on getting a place at university as on not ending up pregnant. Her three best friends are Holli (Natasha Jonas), prone to unprecedented violent outbursts, Amber (Alice Felgate), the “pretty but naive” one and Saz (Mandeep Dhillon), a sarcastic maths geek. Each character brings her own special blend of comedy to the show and the actors bounce off each other with ease. Despite their differences on paper, the four girls are stalwart friends and the cast plays it out at just right the pitch for their friendship to feel natural and truthful.

The show presents an urban environment that doesn’t bypass representations of class or multiculturalism: Viva is Black British, Saz’s family are Sikh and Holli and Amber are white British. The very fact the programme is unusual in not being another example of woman/girlhood as an exclusively white, middle-class, privileged existence shows the progress still to be made in TV.

Overall, Some Girls utilises a realistic dialogue and easy-to-follow formula. This ensures that, unlike the more polished Skins, the show doesn’t fall into the trap of portraying an unrealistic, overly stylised version of teenage life. Davis writes authentically about the contemporary female experience – these girls fight with rival cliques, on the football field and with each other. They break up and make up with partners and lust after men (and, sometimes, women), some of whom don’t want them. They treat their parents with the usual teenage disdain. All this lends credibility to Davis’ creation; these are multi-faceted characters who ring true to anyone who has ever encountered a gang of 16 to 18-year-old girls at school. The realities of these four girls’ experiences with adolescent life, including sex, teenage pregnancy, abortion, house parties, body issues, relationship problems and alcohol use, come off at once as both comedic and true to life. Not making these issues stand out in a contrived way acts as a challenge to the taboos that often serve to stigmatise young working-class women in modern Britain, challenging conventional social norms.

Some Girls also subverts outdated stereotypes. In the latest series, Viva’s fiancé Rocky (Jassa Ahluwalia), who wants to be a nanny, turns down sex because he’s too tired from babysitting her sister and Holli complains that one of her current boyfriends (of which there are several) wants her to go and see “a shit sounding rom-com”.

As witty as it is silly, the suburb acting talents of this young and vibrant cast, coupled with the stellar script from Bernadette Davis, makes for an interesting and thought-provoking 30 minutes. The show may not be particularly challenging to watch or breaking political and social taboos but it is a step in the right direction when it comes to presenting British young women on television in an honest, unfiltered and naturalistic light. This makes a change from the all-too-familiar characterisation of female characters as ditzy, innocent and provocative empty vessels.

The central characters from Some Girls (left – right): Amber (Alice Felgate) with her arms folded and mouth wide in a ghoulish pose, Saz (Mandeep Dhillon) with her eyes crossed and poking out her tongue, Viva looking upwards to her right with her tongue out (Adelayo Adedayo) and Holli looking disgruntled, with her right arm on Viva’s left shoulder (Natasha Jonas). Image via BBC Pictures press pack.

Kate Bonynge is a twenty-something theatre geek and Marion Cotillard worshiper living in London, UK. You can find her on twitter at @katebonynge