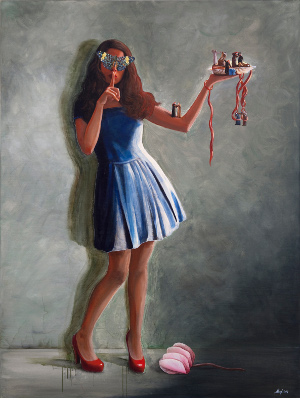 Building towards something different

“It starts with something pissing me off.”

This is the response given by artist Shurooq Amin when asked about how her creative process begins. The question came from Anthony Downey, editor-in-chief of the Ibraaz publishing company, which specialises in contemporary visual culture in North Africa and the Middle East, as part of a conversation which took place at the opening reception of Amin’s current exhibition We’ll Build This City on Art and Love. Showing at Ayyam Gallery London, the exhibition has travelled here from its first showing at Ayyam Gallery in Dubai.

Founder of the gallery, Khaled Samawi, began proceedings by praising Shurooq Amin’s bravery: a trait that became increasingly more apparent as the talk continued and we heard more from the outspoken and unfettered artist.

Living and working in Kuwait as a mixed media artist and poet, Amin is known for being socially and politically inflammatory, challenging antiquated attitudes regarding gender and the role of women in a region renowned for its conservatism, the Middle East. Her work has been subject to controversy, censorship and banning but Amin refuses to be silenced.

She is well aware that the backlash stems from a fear of the unknown and a reluctance to change the moral hypocrisy and subjective censorship that is rife in the area. During the talk, Amin said that her work confronts society, unravelling its double standards and forcing it to acknowledge its problems. According to Downey, Amin uses her “art as a mirror showing society what it is”, a statement she agreed with.

In her previous series It’s A Man’s World, Amin unmasked the hidden underground lives of men in the Persian Gulf. This was a series of mixed media on canvas works which exposed the lives many Middle-Eastern men live behind closed doors, particularly in Islamic counties where the sexes often socialise separately. Amin’s main concern was to unmask the exterior most Arab societies insist on presenting to each other and the outside world; one with strict laws on alcohol consumption and where sexual relationships are only permitted between married men and women. In the series Amin’s male figures live hedonistic lives and seem unconcerned by rules or religion. They drink Johnnie Walker, lust after women and men and indulge in the vices of shopping and smoking. (for example, the work ‘I Like Him I Like Her’). During the talk, Amin tells us that many people in Kuwait suffer with alcoholism and there are often problems with drink drivers despite the fact that alcohol is illegal in the country. The exhibition was shut down in Kuwait City almost immediately. With the current We’ll Build This City on Art and Love exhibition Amin continues her rebellion in the face of adversity.

She uses humour and satire to mock those determined to uphold the outward façade of a respectable society and this is illustrated in the piece ‘Family Portrait: I’m Lonely; I Have It All; I Smoke; I’m Gay’. Like most of the works in the exhibition, the piece is a large scale panel made up of layered photographs and printed images reworked with paint. Framed like a domestic photograph with the father in traditional dishdash, keffieyeh and agal, and the mother wearing an abaya typical of the Persian Gulf, the portrait depicts a seemingly perfect family unit. Their faces however, similar to Magritte’s iconic apples, are masked by cut-out flowers. Although the title of the work tells us that the family members have voices, the viewer does not know who is saying what. Instead, the flower seems to represent femininity, sanitising and covering up their taboo admissions.

Amin wants to use her art to make way for progression

Feminine motifs like flowers, butterflies and fairies recur throughout the exhibition, covering women’s mouths and muting their voices in the same way the artist’s world has relentlessly tried to silence her. Even with the overwhelming support she has received against censorship, often receiving letters and email from men and women thanking her for her outspokenness, Amin has also been threatened, her children bullied and her work lazily accused of being unpatriotic, anti-Islamic and even pornographic. Walking around the gallery and hearing Amin speak so passionately about her concerns and her country, it soon becomes clear that the detractors are very much mistaken. She told us she sees Kuwait as a child who is ill and needs treating. She wants to use her art to make way for progression. 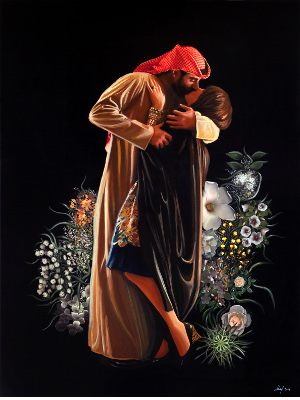 Although Amin uses Kuwait as her reference point for her own personal experience, the themes and iconography Amin uses would be instantly recognisable to many women in the Middle East, particularly those from affluent backgrounds, where designer clothing and extravagant jewellery is frequently worn under the abaya for example and these habits are reflected in Amin’s female protagonist in ‘The King of Hearts’. She uses a generalised, perhaps even stereotypical image of an Arab woman allowing viewers to see themselves and the people they know represented in her work, not only in their dress but also in their experiences. Amin is telling stories people in the Middle-East know but refuse to openly acknowledge for fear of shame or dishonour. Amin was named artist of the year at the Arab Woman Awards and was the first Kuwaiti woman artist to have her work auctioned at Christie’s.

‘Piece of the Pie: Who Stole the Tarts?’ is one of three panels in the exhibition which depict a sole female figure. The curator has chosen to place the works side by side and in this particular piece a woman stands dressed in western clothing – an Alice in Wonderland costume perhaps? Her eyes are masked by a butterfly and she playfully shushes the viewer with one hand and holds up a pie in the other. The pie is being fought over by tiny men in traditional Kuwaiti dress who struggle through the red tape of bureaucracy. The Lewis Carroll references are used to show the woman managing to grow tall and confident amongst the bickering of the men. Is this a self-portrait of Amin, rising up undeterred by the cynics? Or is it a symbol of every woman in the Middle East and her potential to achieve power?

The defiance of Arab women can also be seen in the second panel ‘Fashionista: The Mad Hattress’. A Vettriano-like female figure stands alone looking down at the viewer, dressed in western clothes and framed by hanging flowers. She is being held up by and simultaneously held back by her crutches. She wants to speak but her veiled mouth is silenced by the niqab. As the niqab is worn with a skirt and a sleeveless top, with her hair revealed, it seems clear her mouth is covered for a reason. Amin, like many contemporary artists from the Middle East, uses clothing to explore the theme of Arab women’s identity and this work juxtaposes eastern and western dress to demonstrate the struggle modern Arab women can have balancing both cultures. 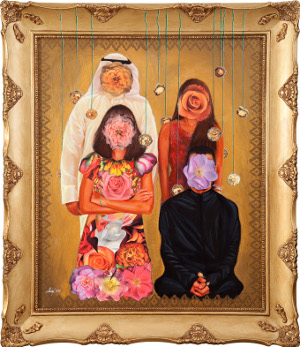 ‘Child Bride: Through the Looking Glass’ is the third image of a sole female figure. This work is executed in a different style. The young girl depicted is shown from the waist up, covered in a white hijab and adorned with a flower in her hair. Like the women in the other pictures she is the central figure, but the way she looks out at the viewer is not the same. This piece was created after the artist heard a story about a nine-year-old girl who was forced into marriage and made pregnant by the age of 10. Unfortunately, we hear about these disturbing stories regularly and during the talk Amin reminded us that for these young girls, being sold by their fathers for marriage is considered a solution for many families struggling with financial burdens, especially in times of war. The girl in the picture is surrounded by tiles with fragments of her own reflection and patterns reminiscent of Islamic art – but the tiles are cracking. At the foot of the canvas sits an array of plants evocative of the self-portraits of Frida Kahlo.

The current political climate in the Middle East and the remnants of the so-called ‘Arab Spring’ have seen a flourish of contemporary artists from the Arabian Peninsula eager to tell their story and unmask the truth about the Middle East. Ayyam Gallery is one of a number of spaces which focuses on bringing these artists to the forefront of cultural discourse in the UK.

We’ll Build This City on Art and Love is an exhibition that came out of anger, yet the overall tone of show is of one of optimism and hope. The works of art are a reflection of Shurooq Amin’s courage, sense of humour and fighting spirit. and the opening reception at Ayyam was a great insight into the artist’s work and political activism. One gets the sense that Amin is inspired by her supporters in the same way that they are inspired by her. She told us that the work she has produced so far has merely scratched the surface. She is determined to make her voice heard and is driven by her relentless need to expose the corruption and injustices she faces as a woman and as an artist in Middle East.

Image 1: Piece of the Pie: Who Stole the Tarts? “A woman stands dressed in western clothing – an Alice in Wonderland costume perhaps? Her eyes are masked by a butterfly and she playfully shushes the viewer with one hand and holds up a pie in the other. The pie is being fought over by tiny men in traditional Kuwaiti dress who struggle through the red tape of bureaucracy.”

Image 2: The King of Hearts. A man and women embrace, kissing, with movie poster-style passion, the woman held up by the man, her hand on his chest as his arms envelop her. He wears a traditional thawb and headdress; she seems to be wearing some sort of traditional outer garment but over a knee-lenth skirt and wedge heels, alongside a large golden bracelet. Behind them a variety of flowers bloom hugely against a black background.

Image 3: Family Portrait. A traditional frame is painted around a picture of two adults behind two children/young adults. The men wear traditional clothing but the women’s clothes are more Western-style dress. All their faces are obscured by flowers. What seem to be more flowers hand down from green strings from the top of the picture.