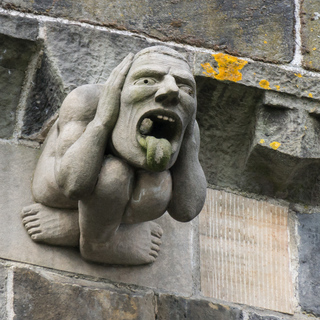 Sometimes, a new word or phrase comes along to describe a familiar, as yet unarticulated, experience. Mansplaining is one such word. Shortly after Rebecca Solnit’s 2008 essay Men Explain Things To Me, mansplaining hatched out and took flight. Mansplainer was one of The New York Times 2010 words of the year, and this week, the Austrailian Macquarie Dictionary has announced mansplain as the Word of the Year 2014, defining it thus:

verb (t) Colloquial (humorous) (of a man) to explain (something) to a woman, in a way that is patronising because it assumes that a woman will be ignorant of the subject matter.

It’s a joke. The situations it describes are infuriating but also funny. Although Rebecca Solnit’s essay spoke seriously about the silencing of women, she describes laughing at the man who lectured her on her own book. I see stories like that every week on Twitter – often a Twitter exchange – where a chap has taken to explain an important article, a book or a video game to a woman, only to be politely informed that she wrote the damn thing. Unfortunately, folk have started to use the word in earnest, as if it’s not a joke but legit feminist jargon.

Jargon is very quickly over-used in social justice spaces. Language is part of how we bond – we use the same words to signal, “I am one of you, you are one of us.” We sometimes forget that other people might not understand, and that we should want them to because we’re trying to change the world. There is a place for irreverence, just as there is a place for academic language, and I’m not for a moment suggesting we should tailor our language to make every discussion accessible to sensitive non-feminist men. But mansplain? That’s not just an issue of not all men – it is a pejorative term, man is in the word, it sounds like something men and men only do.

Last week, I saw two more new words, along the same lines; manterrupt and bropropriate. I like bropropriate – they could have gone for apbropriate, I suppose, but I love the bropro, which I think is the sound a rook makes. Manterrupt is a dreadful construction (nobody thought of himterrupt?). These words describe behaviours familiar to many women; the tendency for men to make more interruptions when women are speaking, and the tendency for men to steal women’s ideas and claim them for their own. I saw them on an infographic called 7 Ways to Combat Manterrupting (inaccessible to screenreaders) which is otherwise serious in tone. When I started to write this and googled ‘manterrupt’ to retrieve the link, I found other perfectly serious articles, such as How Not To be ‘Manterrupted’ In Meetings (advice includes avoiding “baby voice” – a soft, high-pitched voice, like well, my natural voice).

The phenomena these words describe are all about power. These are things that powerful, arrogant people do. They think they know best about everything, they think all the great ideas are their own, they interrupt because what they have to say is more important than what the other person is saying. We live in a world where men are likely to have greater social, political and financial power, and where men are more often conditioned to consider their ideas to be of pressing importance. However, all powerful and arrogant people do this stuff, including women, and they do it to anybody who they consider to be of lower status, including men.

It’s not simply that women do it too, but that various people exhibit the same behaviours where gender is not part, or only one small part, of the dynamic; white folk do it to people of colour, straight to LGBT people, non-disabled to disabled folk. If a lay person is going to tell me everything I need to know about the chronic illness I’ve lived with for 18 years, it will almost certainly be a woman.

And as with social privilege, it’s not necessarily useful to start categorising – whitesplaining, straightsplaining, ablesplaining etc. – because power is drawn from many directions all at once. When I’ve been subject to these behaviours, I’ve guessed that relative youth, socio-economic status and my vocal non-resemblance to Brian Blessed have contributed to someone’s sense that it’s okay to bulldoze me, along with gender, disability, sexuality and so forth.

But the problem of these words isn’t just about accuracy. These words are both gendered and pejorative and that’s not how we’re supposed to play the game. Feminism has long wrestled with language which describes a negative behaviour in feminine terms; slut, bitch, hen-pecking and every weak performance as being like a girl etc.. We can’t very well say, “Yeah, but mansplaining is okay because it’s true!”

And as with pleas to Check Your Privilege, the concept of mansplaining has already become an ad hominem argument. A man who bulldozes a woman on a subject she knows more about may do so because he thinks that as a man, he simply must know best. But that’s kind of what it looks like when a woman dismisses a man’s argument as mansplaining. She’s may be right! But it’s just name-calling, alienating and pretty pointless.

We want to live in a world where women are heard and listened to and where women get credit for their own ideas and achievements. We’re perfectly capable of talking about this and the obstacles we face without using language which will make other people stop listening.

[The image is a photograph of a gargoyle on Paisley Abbey. A crouching, roughly masculine figure sticks out its tongue while holding its hands over its ears. The image was found on Wikimedia, is a photograph taken by by Wikimeida user Colin / Wikimedia Commons and is used under a Creative Commons.]