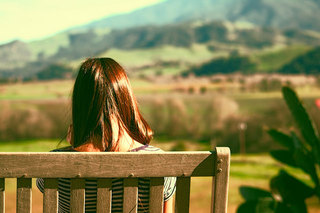 March guest blogger Sasha Garwood writes about what it’s like eat hospital food while struggling with an eating disorder. Please proceed with caution if you are sensitive to triggers around eating disorders.

So, Eating Disorder Awareness Week has just finished. There’s also been a bit of a hoo ha going on right now about hospital food, with food writer Prue Leith rightly dismissing the Government’s insertion of regulations into catering contracts as insufficient and ineffective when it comes to tackling the massive awfulness that is hospital food, and it seems that nobody has spoken much about this from a specifically ED viewpoint. This seems strange to me, given the costly and prevalent spread of eating disorders and the huge importance of food to this group of inpatients, so, here goes.

Not that my conclusions – it needs to be both better nutritionally and accompanied by decent therapy engaging with the individual’s feelings and preferences around food – are likely to surprise anyone. But sometimes it’s worth stating the obvious because it’s only obvious to those who’ve experienced it, and everyone else assumes that what actually happens is so hilariously anti common sense that it can’t possibly be true.

So, when I was in hospital (having collapsed with multiple organ failure, been triaged and put in intensive care) one of the first problems we faced was that the hospital wouldn’t or possibly couldn’t feed me. I’ve been coeliac and dairy intolerant since way before anorexia was a twinkle in anybody’s eye. Luckily for me, my supportive parents were there, insisting that both the NG tube food I was given and the other food was gluten and dairy free. The hospital couldn’t do that, so my parents (bless them) brought in food from home and fed me. Literally fed me, because I developed starvation psychosis after a few days and lost all muscle control.

There is an untold amount of privilege here. I had parents able to take time off work or working from home, who could afford extra food, who collected my boyfriend from London to see me and organised a network of friends and acquaintances (some with medical training) to come sit with me and fight my corner, who could afford a brilliant clinical psychologist who also came to the hospital to discuss the psychosis thing with my (non-ED specialist) care team. What happens to patients who don’t have all that? Are they meant to not eat? Are their food preferences – so vital in the initial stages of being able to treat food as trusted and necessary rather than a malicious and betraying horror – simply ignored? What if they are made ill by being forced to eat unsuitable food and their symptoms dismissed as psychosomatic? How can anyone even attempt to build a functional relationship with food – as one must to recover – under those circumstances? As it turned out, I started eating while in psychosis and continued when it faded, but that I had an ongoing supply of healthy, nourishing meals was entirely down to the efforts of my family and the kindness of the nurses who allowed us to use their kitchen.

Then, I was transferred onto a specialist ED unit, where I wasn’t allowed to bring in my own food. The sheer crippling stupidity of this still beggars belief. Keeping me off the ward would have been better on ‘not upsetting other patients’ grounds. Even if I had been a ‘fussy eater’ who wasn’t made ill by certain foods but simply had strong preferences, I was eating, which for an anorexic in recovery is surely the best possible clinical indicator not to fuck around. Eventually, after much resistance, they compromised. I was allowed a box of ‘special’ food in my room (rice cakes, non-dairy milk) as long as I ate at the set mealtimes, and ate the hospital ‘meals’. The latter did make some attempt to cater to the gluten dairy thing, for which I was grateful, even though it basically meant heaps of white rice with strange combinations of food as a replacement for sandwiches. (Why not brown rice, except where contraindicated by bowel trouble? I don’t understand). Perhaps unsurprisingly, my presence was difficult for the other patients, and they sent me home on day release after a couple of days of this. And my understanding is this particular ward is a long way from the worst, despite confusion over regulations about access to kitchens and bathrooms and so on – friends have had much worse experiences.

The thing is, anorexics aren’t stupid. And we’re usually pretty culturally aware. We are vastly more likely to buy into – and not struggle so much with – your ‘food is medicine’ schtick if the food you’re offering us is food we like and consider ‘healthy’, fruit and vegetable dishes and protein and salad rather than (or even alongside) endless bread and packets of crisps. If it’s freshly prepared and recognisably nutritious. Learning to trust food and the process of eating is a massive part of the recovery process. And yes, we may put on weight more slowly if we’re eating fruit and vegetables and protein and so on rather than ALL THE STODGE, but (and here my argument gets REALLY controversial) the ultimate goal of eating disorder treatment ought to be to equip us to eat functionally in the real world, where we are in control of our own eating choices. (And encouraged, including by medical professionals, to define ourselves by them, but that’s an entirely separate rant). Fast weight gain really isn’t and shouldn’t be the point, and weight gain certainly does not equal recovery. Treatment should be helping patients with the psychological stuff, so that for everyone’s sake (including that of the overstretched NHS) we don’t become ‘revolving door patients’, so that one inpatient stay gives us the psychological and practical tools we need to live and eat functionally.

Yes, in the short term decent food and regular specialist psychotherapy (by which I mean therapy specifically engaged with the individual and their particular issues and history rather than superimposing an ill-thought-out range of assumptions, incidentally) is more expensive than bad food and weekly group therapy sessions, but if it actually works (which it stands a better chance of doing) it works out a hell of a lot cheaper in the long run. I have friends who have been in and out of hospital for 20 years. A year that actually helped would have been much cheaper.

Anyway. It’s not ONLY ED patients that better hospital food would benefit. All patients and in fact staff would be made marginally happier by a choice of suitable, freshly prepared, nutritious food. A friend with repeated TMJ surgeries has many comic horror stories of being served food they were literally unable to eat – sandwiches? With a jaw wired shut? Crisps? When they’re dehydrated? Prue Leith points out that 70% of hospital food is currently wasted. Let’s imagine a world where all patients, ED or otherwise, could select their meals (in advance would be fine) from a small range of freshly prepared dishes and portion sizes were nor randomly gendered (or imposed as punishment, thank you ED inpatient history for all the horrors I’ve witnessed!) and maybe a small range of foods (salads, maybe?) were available outside the set times. Just think how much difference that might make to people’s struggles to get well, whether from anorexia or otherwise.

The illustration is a girl sitting on a bench with her back facing us. She is brunette with straight shoulder length hair. Thanks David Michalczuk for the photo.