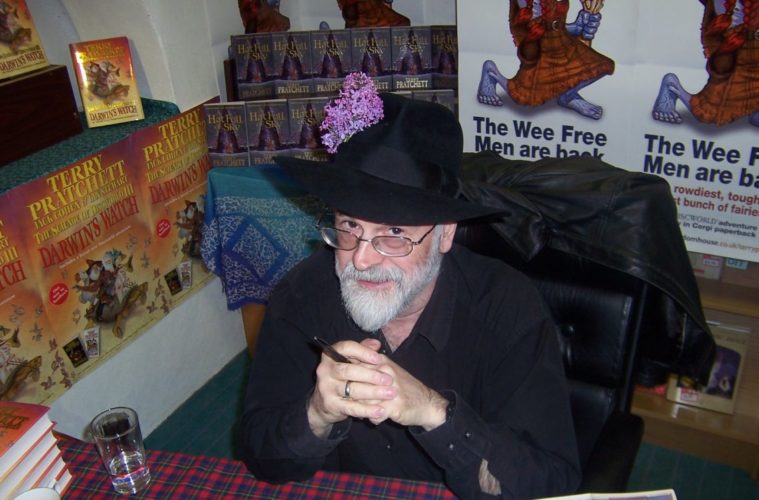 On Terry Pratchett, without whom the world is poorer 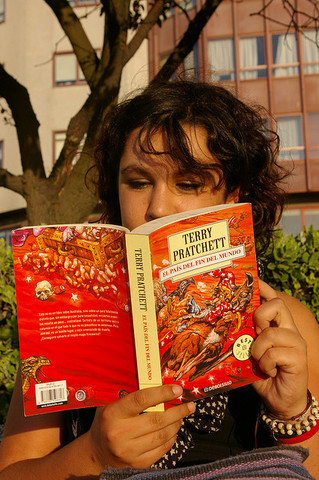 Terry Pratchett died today. I’ve spent most of the afternoon in tears, overwhelmed in a way I hadn’t quite expected by the fact that one of the pillars of my fictional life had gone. (I can only imagine how his friends and family – y’know, the people who actually knew him – must be feeling. My heart goes out to them.) There are going to be any number of obituaries and personal reflections and so on, because he was so important in the lives and minds and hearts of so many people, and I’m sure they’re mostly going to say everything I’m struggling to articulate much better than I can.

(Neil Gaiman, for a start, on his anger and sense of justice and immense capacity for love. Laurie Penny, about the stark human truths of Discworld).

But still, I’m going to struggle, because a substantial chunk of my ideals and a lot of what I know and think and feel about being a person come from Terry Pratchett. He’s fundamental. His concepts of sin and responsibility and kindness seeped into my bones at so early an age they’re inextricable now from who I know myself to be. And I’m far from being the only one – that remains an instant shorthand of kinship and connection among most of my close friends. We apportion witches and watchmen according to whim and wishes, we share crushes on Vimes, we’ve known most of the books off by heart for years and prescribe them like medicine for illness or injury or injustice, and still, for all of us, the worlds he built and the people within them are as real to us as each other. Sometimes more so, because for us and many, many others Pratchett’s books were the safe space where we went to live when the real world was unbearable.

Not because they were devoid of cruelty and malice and injustice and human error and stupidity and selfishness and people (or apes, werewolves, elves, trolls, goblins, dwarves etc) getting things horribly, woundingly wrong, but because alongside those things there was bravery and conscience and honesty and hope. He told us the truth and he made us laugh and there was always some glimmer of redemption attainable for those willing to do the difficult, honest, right thing and fire the crossbow bolt through the keyhole and look who you really are firmly in the face.

Granny Weatherwax, a towering moral figure if ever there was one, taught me more about consequence than any religious ideology I’ve ever come across. In Maskerade, amidst operatic crescendo, she catches a naked sword in the palm of her hand, much to the dismay of Agnes Nitt, to whom she’d previously insisted on the impossibility of such a feat. “Not my fault,” she snaps. “I didn’t have time.” At the end of the book, she returns to her cottage and sits at the table, with some salve and a square of linen. “Well,” she says. “I reckon I’ve got time now.” In Lords and Ladies, she “had to learn. All my life. The hard way. And the hard way’s pretty hard, but not so hard as the easy way.” In Carpe Jugulum, she gives us what’s probably one of Pratchett’s most famous moral touchstones, his definition of sin as objectification:

“There is a very interesting debate raging at the moment about the nature of sin, for example,” said Oats.

“And what do they think? Against it, are they?” said Granny Weatherwax.

“It’s not as simple as that. It’s not a black and white issue. There are so many shades of gray.”

“There’s no grays, only white that’s got grubby. I’m surprised you don’t know that. And sin, young man, is when you treat people as things. Including yourself. That’s what sin is.

“It’s a lot more complicated than that –”

“No. It ain’t. When people say things are a lot more complicated than that, they means they’re getting worried that they won’t like the truth. People as things, that’s where it starts.”

“But they starts with thinking about people as things …”

It’s delicious and it’s so unutterably true. Empathy at all costs is the best rallying cry for human interaction I can think of.

Granny’s cast-iron commitment to doing what’s Right – where Right is defined as protecting the weak, allowing people autonomy even when they’re stupid or sullen or sad, being brutally honest with yourself even when it’s inconvenient, honouring communities and social rituals because they give human life shape and meaning, fighting for people’s right to be people even when it doesn’t make sense as long as they accord one another the same respect – has had so profound an effect on my personal morality that I cannot conceive of myself without it. I could say the same of Sam Vimes, Old Stoneface, who works his way up from alcoholic member of a dying Night Watch to the reluctant Commander of a full-scale citywide cross-species police operation (and wife of Ankh-Morpork’s premier Duchess) by dint of sheer force of conscience; or Susan Sto Helit, kickass schoolteacher, saviour of the Hogfather and granddaughter of Death, lovely Death, fond of kittens, who’s all the more poignant for his awareness that “THERE’S NO JUSTICE. THERE’S JUST ME.” They built me. I love them like they’re my family and in some sense they are, because they made me into who I am as an adult.

And they still exist – that is the joy and the miracle of it. Pratchett has given us these people and these books and these stories and they will never die. To quote the man himself, “No one is actually dead until the ripples they cause in the world fade away,” and I’m pretty sure his ripples will keep rippling for a long time yet.

But so much wisdom and kindness and rage and righteousness has left the world, and it’s just so fucking sad.

The feature image is of Terry Pratchett at a book signing. The picture is shared by Myrmi under a creative commons license.
The illustration is of a woman with brown curly hair reading Terry Pratchett. Thanks Gaelx for the photo.