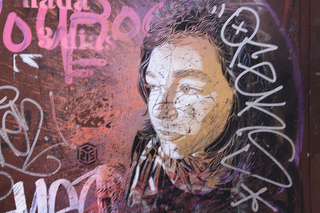 I’m queer. So’s my boyfriend. Thing is, we’re a cis boy and girl, and so to all outward appearances (unless you actually talk to, well, me, because boy is pretty cagey about discussing personal things with other humans although all in favour of being outed in this article) we’re straight. Which does my head in.

It isn’t so bad in London, where I live half the time. Most of my social circles are queer-friendly if not actually queer, so people don’t really make assumptions, and I am Really Obviously Queer and Political all over the interwebs enough that people I meet in that context work it out pretty quickly. Most people are enlightened enough that they get being bi and being with a dude, and enough people are poly that having a male fiancé doesn’t necessarily preclude having a girlfriend also in that particular social context, so people don’t assume.

In Sheffield, though, where boy lives and I spend the other half of my time, it’s a rather different story. It’s not that there aren’t queer and interesting people in Sheffield – I know a few, although few is woefully appropriate in comparison to my extensive London networks. It’s not even that the terms ‘queer’ and ‘interesting’ of necessity overlap. It’s more that the boy’s social circles (such as they are, he’s a hermit) and physical environment (suburbia, and work full of older men) assume heterosexuality as a matter of course, and so this vast chunk of my context sort of…doesn’t even notice something that down south I’ve built my life around. It’s…difficult. It feels like invisibility a lot of the time, however much I shout on the internet about it. And don’t even get me started on the kind of casual misogyny that gets bandied around up here like it’s funny, in ways I struggle to imagine happening in my London circles without a backlash of fire and brimstone. I think a lot of that is the numbers – it’s perfectly possible in London to surround myself with people who think pronouns matter and are carefully respectful of people’s identities, and I could only do that oop norf without bowing out completely from the ‘normal world’ where boy has (had to) build his life.

All this intensified recently when we got engaged. I am (clearly) 100% in favour of marrying him, we are very committed to one another and would like to officially belong together. (FWIW, we’re also both quite space-y, so it’ll be the kind of marriage where we sleep together but each have our own room, but my need to assert that – to point out that this is our thing and we will be working out how to do it our way rather than superimposing culturally dictated norms about how marriages should work – is sort of my point). It was astonishing the assumptions that were suddenly made – I would be moving oop norf into his house immediately? (It’s far too small, and he’s tied into the mortgage for at least another two years, so we won’t be living together for a while.) We’d be marrying next year? (the ability to afford to do so would be a fine thing!) We’d be having children soon, as I’m in my thirties? (I’ve never wanted children, and boy already has one and hates the idea of more, so actually it all works out rather neatly. This one particularly bugged me, as even people who’ve been friends for years and know my position on squeezing a small person out of my most delicate areas pretty thoroughly suddenly felt the need to check it hadn’t changed, as if agreeing to marry somebody I loved made me a different person.) None of this was done with malice, not at all, but it still emphasised the extent to which we’re expected to fit into cultural norms because of our genders.

This is a long way from the worst thing that could happen. It’s not violence, it’s not transphobia, it’s not even biphobia although it might be construed as bi invisibility. In the great scheme of our lives it’s hardly important at all – and yet it is, it’s important to me, because it’s been made glaringly clear that moving to be with my partner is going to involve giving up for much of the time a large part of my cultural identity, of my activist networks, a chunk of myself as well as my friends. And that makes it harder for both of us.

The illustration above is grafitti depiction of a woman looking to the left. It is against a dark background. Thanks Nurla for the photo.