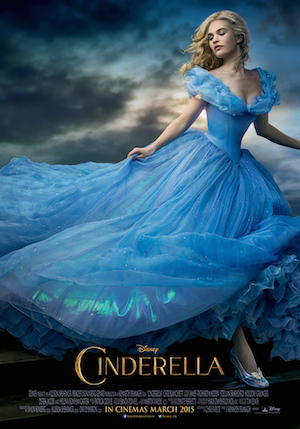 Disney’s 2013 mantra insisted we “Let It Go” while flinging our fisted hands in the air. It became the closest Walt’s empire has ever got to suggesting the best way forward is to simply say “fuck it”. However, this year’s theme, courtesy of the new live action Cinderella, is to “have courage and be kind”, echoing those lessons that got Dorothy and those ruby slippers though the bumps in her yellow brick road. Has Disney’s version of feminism gone one step forward two steps back in a pair of glass slippers?

The original animated version of Cinderella won the Golden Bear for Music Film at the first Berlin Film Festival in 1951, so to have this newfangled version launch at the 2015 Berlinale this February seemed quaintly apt. Once the audience realised the film was laughing at itself as much as we were laughing at it, the credits rolled to a rapturous applause. Director Kenneth Branagh’s Cinderella is as camp as Christmas, as shiny as a new penny and has managed to exploit its pantomime personality with a knowing grin.

Still, Branagh’s claim to have modernised the fairy tale by eradicating the sexism is a little limp in comparison to what we now know Disney is capable of. Talking at the press conference at Berlinale, a jubilant Branagh told the crowd: “The original animated version was much more about this boy who comes to save the day and this version is so not like that. It’s the strong girl by herself and a young man coming together that makes the story, rather than a far more sexist view.”

With criticisms of the “have courage and be kind” pith being “trite”, he claimed he was “reminding them of King Lear when Edgar says ‘Have patience and endure'”. A valid, if typical, response from a man famed for his Shakespeare adaptations; however, the cordial personalities of our leads are far more syrupy than Shakespearean.

Downton Abbey‘s Lily James is Cinderella, the archetype of a placid, inoffensive, beaming beauty. Her Prince Charming is Richard Madden and with his Daz-white teeth and puffed out chest, he pursues our leading lady with his nifty waltz moves, tight jodhpurs and large sword. The casting is a little canny; their roles in the hugely successful period dramas Game Of Thrones and Downton Abbey add a familiar feel as they embark upon another epic drama – fairytale style. 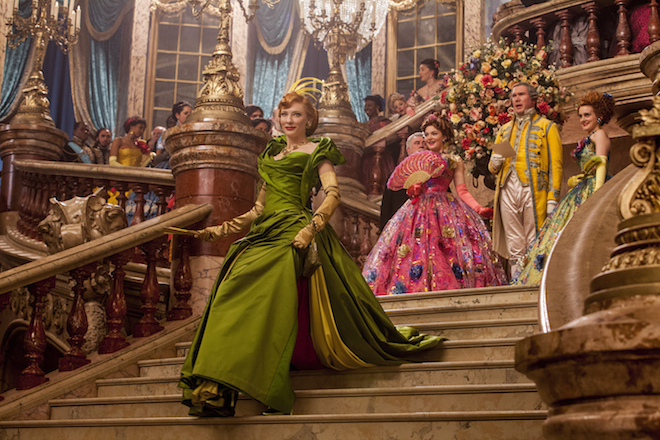 As gleeful as these leads are, they are eclipsed by the presence of the real belle of the ball, Cate Blanchett. The screen practically curls at the edges with the heat she radiates in her role as the Stepmother. She is fiercer than Beyoncé after a double Berocca; she drinks, she gambles, she even has black friends… In perhaps a sloppy move, our first sighting of non-white folk comes with a mini montage that serves to affirm Blanchett as a deviant diva. Blanchett surely deserves her own Maleficent-esque spin-off movie after playing this triumphant villain. Maybe in that movie they can make up for the careless ethnic representation. In another careless oversight, perhaps confessing ageism, the stepmother is never given the chance to shoehorn her foot into that glass slipper. She was at the ball so surely she should have been given a go?

Is there really a place for feminism in a hardwired plot that says that you’ll only live happily ever after if you’re married off to a prince?

Cinderella‘s other brilliant female role is the excellent Helena Bonham Carter who is perfect as the dizzy Fairy Godmother. It would have served the movie well if she’d been given more screen time but she gives a lot in the little she’s given in her dazzling and hilarious performance.

Cinderella is fun, cute and enjoyable but the downfall of Disney’s fairy tale romp is that it frays the feminist thread that Frozen stitched. The attempts of female empowerment are detected in Cinder’s tendencies towards sisterhood; she triumphantly claims “us ladies must love one another” and she reveals a rebellious streak with the exclamation that “just because it’s what’s done doesn’t mean it’s what should be done”. 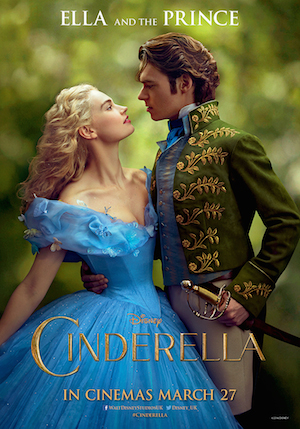 However all this girl power drowns in the insistence from the King that “marriage is for the ‘good of the kingdom'”. The way every woman bows down to the cocksure prince and his merry men, it’s like an old-fashioned version of the ridiculous TV show Take Me Out (where all the girls beat each other down to win over some gormless guy). It begs the question: is there really a place for feminism in a hardwired plot that says that you’ll only live happily ever after if you’re married off to a prince?

This isn’t the only remix of their own archives Disney are tackling. Beauty and the Beast, starring Emma Watson as Belle and directed by Bill Condon, is also in the works. With Emma Watson somewhat the new poster-girl for feminism, we can only hope she’s stuck her oar in and helped it to be as finger snapping as Frozen.

First picture is film poster showing a young woman (Lily James as Cinderella) in blue dress, against cloudy sky, with “Disney Cinderella: in cinemas March 2015” lettering at the bottom.

Third picture is another version of film poster, with Cinderella (Lily James) and Prince (Richard Madden) looking each other in the eye as we see their profiles, on green background, with “Disney Cinderella: in cinemas March 27” lettering at the bottom and “Ella and the Prince” lettering at the top.