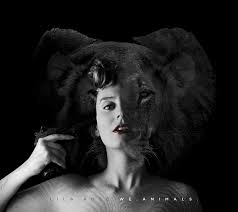 Canadian born, San Francisco based singer/songwriter Lila Rose has been making music since the late 2000s and received a great deal of critical acclaim for her 2012 album Heart Machine. Heart Machine was, according to the press release, a much more electronic affair than We.Animals., her latest album, and this change from electronica towards a more industrial-tinged dark rock is a reflection of the thematic motifs of the album, namely Rose’s concern at what humanity is doing to planet earth and our treatment of animals. The new album sleeve, which is printed on 100% recycled paper (naturally), states that ten percent of sales profits will go towards helping animals, while the album’s sound is both searingly emotional and darkly apocalyptic in tone.

Industrial rock is not a notably female-populated area of music, so it’s interesting that Rose has chosen this area of music to draw on in creating We.Animals. To understand why she has chosen such an abrasive sound for a record so thematically routed in nature, a subject which is more traditionally associated with acoustic folk music (think Pete Seeger’s ‘Where have all the flowers gone?’ and Joni Mitchell’s ‘Big Yellow Taxi’), is to understand her rage and frustration at what we are doing to the planet and our fellow inhabitants in the animal world. It’s a courageous decision for a courageous record – and it works fantastically well.

As if to echo the links between folk music and nature themes, opening track ‘Stars’ lulls the listener into a false sense of security with its folky/Mediaeval Baebes refrain, suggesting a kindred spirit with former Baebe, Mel Garside, aka Maple Bee – another woman not afraid to draw upon a range of tools and styles of music when composing songs.

However, it’s the bloodcurdling bluesy swagger of ‘Tracking’ that’s more typical of the album at large, a song which improves with repeated listening, having somehow transcended all musical reference points to become something truly original and authentic.

If there’s such a thing as goth R&B, this could be what it sounds like

Third track ‘Confessions’ occupies the sonic middle ground between the folky ‘Stars’ and the searing ‘Tracking’. Showcasing the range of Rose’s powerful voice, it comes across a bit like Gossip interpreting modern day R&B stylistic mores.

‘This Could Be HA’ really ratchets up the tension with industrial pounding drums, minimal synths and a yearning vocal. If there’s such a thing as goth R&B, this could be what it sounds like. As it is, it’s sonically and atmospherically located somewhere between the gritty, questing, trippy soundtrack to the film Suckerpunch and Zola Jesus circa Striduluum II. As if to reinforce this, ‘Nothing to Lose’ is full-on industrial tinged rock’n’roll, while the excellent single ‘World on Fire’ is full of brooding, synth-fuelled industrial goth. It is an epic single, both thematically and musically, with a sense of foreboding and anger that continues to build.

Meanwhile, ‘Now’ begins with choral vocals and classical airs, before giving way to pounding drums and fierce vocals that are reminiscent of Katherine Blake’s work with Miranda Sex Garden circa Fairytales of Slavery.

The distortion laden ‘Servant’ is a fast, bile-spewing piece which, although saved from the unlistenable end of industrial rock by its melodic chorus and clapping enhanced rhythms, fails to charm me as much as the other tracks do.

‘Easy Love’, by contrast, has a pretty piano introduction and is gorgeously minimal in approach, showcasing a strong lead vocal that is reinforced by minimal percussion and choral backing vocals which only add to the atmosphere. ‘Misunderstood’ also opts for restraint, with dramatic keyboard chords and a creeping sense of anxiety and tension that is almost Hitchcockian.

Final track ‘We Animals’ has a lovely violin-led elegiac introduction, that creates an atmosphere of brooding sadness. “We’re animals, lest we forget”, she sings, returning us to the heart of her message. She cares deeply about animals and the planet and, as she recently told The Bay Bridged:

Art is such a strong, expressive medium and, for a while, my more political side was in the closet to an extent. Music was my bridge, my way to bring it out publicly, to express those views to a larger audience in a creative way.

As the track progresses, the strings increasingly give way to synths, reflecting a change from natural organic beauty to humankinds’ harshness, both sonically and thematically, like an aural relating of the destruction of our planet. It is, needless to say, all very apocalyptic and dramatic.

In this regard, Rose is able to articulate pain and rage with a sound that is both imaginative and innovative. This is a very personal project for her – and it shows. It’s not always an easy album to listen to, but it is one that a patient listener can grow into and return to again.

The image is the album cover of Lila Rose’s new album We.Animals. It’s a black and white shot that features a head and shoulders shot of Lila with one or, perhaps, multiple images of animals superimposed over her face, such as a lion and a bear. Just visible is a gun, held to her head. According to Lila’s Tumblr account, the image symbolises the death of humanity, should we continue to inflict death upon the world around us and the animals within it.