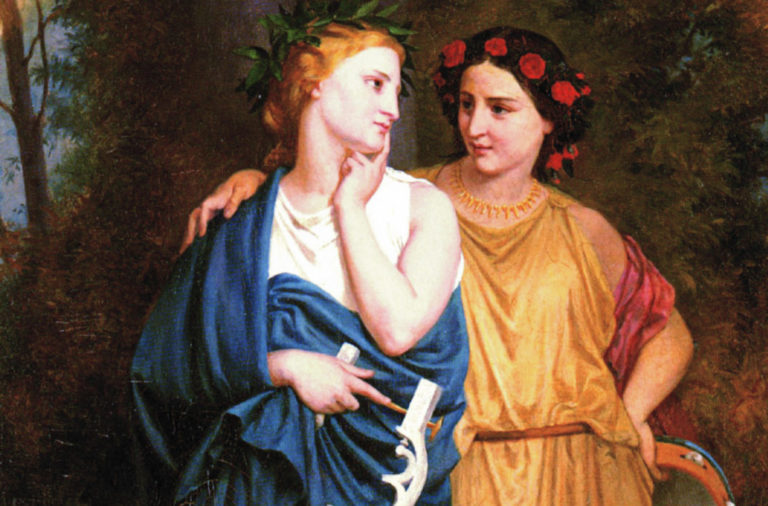 CN: This review refers to rape and violence.

Nightingales is a devised piece of theatre created by the theatre company In Plain Sight that played at the New Wimbledon Studio for two nights in April 2015. Exploring rape culture through a mixture of Greek myth, singing and jokes, it’s less than an hour long and has a cast of four: a main protagonist, Isy, and a Greek chorus of three women in high heels and sparkling green dresses. I really liked it.

The main story of the piece follows the Greek myth of Philomela and her sister Procne, most famously told in Ovid’s Metamorphoses. Procne is the wife of the king of Thrace, Tereus, and asks him if Philomela can come and visit her. Tereus goes to fetch Philomela from Athens, and on the journey back he rapes her and cuts out her tongue so that she can’t tell anyone. Philomela manages to let her sister know what has happened by weaving her story into a tapestry, and the two sisters punish Tereus by killing his and Procne’s son and making him into a pie which Tereus eats. The two sisters flee and the gods allow them to escape by transforming Philomela into a nightingale and Procne into a swallow.

In this modern version the kingdom of Thrace is transformed into a school, Tereus is Procne’s new boyfriend and social media features prominently, bringing the story up to date; for example, Philomela is shocked and disgusted when the morning after he rapes her, Tereus adds her as a friend on Facebook. Video and photos from the rape are circulated meaning that the sisters feel they have to move to a place where no one knows them.

Into this main plot are woven video, sound recordings and the stories of modern-day real life rape victims, particularly those who found their own lives destroyed rather than their attackers’. Several of these stories are North American in origin; I wondered if In Plain Sight could have cast their net a little wider and gathered stories from other corners of the world. 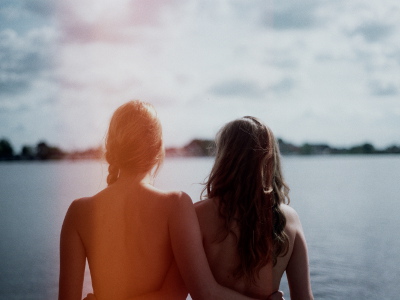 However, the play is not short of ideas. As well as the key presenting technique of using a chorus to punctuate scenes, play supporting characters and interact with the lead, it also features fairly complicated and well-handled sound design and elements of physical theatre and storytelling. Teenage parties are represented by the chorus drinking in a choreographed pattern from plastic cups while bass-heavy music plays. All the elements come together well into something that is more sophisticated than the sum of its parts. The moment when Isy tells us how Philomela and Procne were transformed into birds while birdsong plays in the background is especially moving.

Ideas about domesticity are explored too. Isy first comes on stage dressed in an apron and carrying a cake tin. The most obvious guess for the tin’s contents is cupcakes. Only later in the play do you learn that it’s the pie that Procne makes for Tereus of their son as revenge for Philomela’s rape. Although this is pretty grisly I enjoyed being reminded that women of history and myth were no pushovers and the change from “victim” to “survivor” isn’t something that was invented only recently.

Although the piece as a whole was excellent, a couple of moments where dresses were held up to represent rape victims and a stack of knickers with facts about particular rapes were read out fell a little flat for me. There’s a long history of women telling their stories through sewing from Elizabeth Parker’s Sampler at the Victoria and Albert Museum to Tracey Emin’s ‘Everyone I Have Ever Slept With 1963-1995’, and I wondered if there was another connection to be made somewhere between textiles, the tapestry that Philomela makes to tell her story and the clothing that’s held up in courts as part of rape trials. Still, the show was already incorporating a lot of themes so adding more might have been a challenge.

The cast are excellent. Isabel Sharman as the lead character is warm and engaging and I particularly liked her interactions with the theatre technician which broke the fourth wall and gave a welcome lighter note to some of the play. Each of the Greek chorus, Laura Hulin, Jessica Preston and Jess Price, have their own personalities and interactions with Isy, and add texture and interest to the story. The chorus were not only there to fulfil their traditional role, however. They also challenge and undermine Isy, seeming more interested in singing their own torch songs, and illustrate that women can’t always be relied upon or even expected to support each other.

The play was presented as part of the Illuminate Festival in Wimbledon: a new and exciting festival making good use of the New Wimbledon Studio space that I urge you to investigate if you haven’t already. In Plain Sight are now working on a play called All The Things I Never Said, with a plan to develop it for school groups and younger audiences, as well as a new piece called Frenzy; I look forward to seeing their work again.

Nightingales was reviewed at the New Wimbledon Studios on Wednesday April 15, 2015.

The first image is of an oil painting entitled Philomena and Procne by Elizabeth Jane Gardner Bouguereau, which is in the public domain. It shows two women standing next to each other; the one on the right has her arm around the other. They wear tunics and robes, with leaf and flower gardens in their hair. They each hold instruments. They appear to be in a forest.

The second image is the marketing image for Nightingales, and shows two women from the back as they look across water to land. They seem to be naked. They each have an arm around the other’s waist.