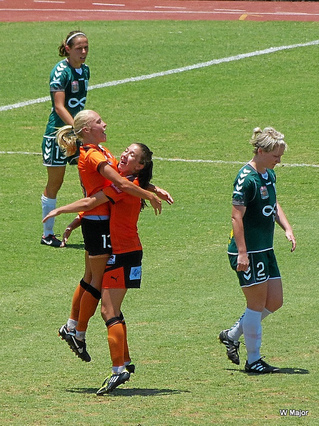 On football, gender, and emotional expression

Editor’s note: We recently updated this post to include links that were not coming through to the website.

On football, gender, emotional expression and why it’s sometimes awkward to look like a librarian even in a football shirt.

Someone dared me to write this post. My friend Max plays football with my boyfriend, and for as long as I’ve been blogging he’s responded to requests for suggestions, ideas and feedback with the suggestion I write about football. So, here you are, Max – a blogpost about football. But as threatened, it’s also going to be about things like hegemonic masculinity and the problematic ways we socialise boys and men out of emotional honesty, constructing adult masculinity as stoicism, control over emotions and their expression only in certain contexts, like football. (This paper offers an excellent exploration of all these things, and some references to follow.)

This is absolutely not to knock football. Clearly, in a contemporary cultural environment it serves some vital functions, and offers a safe space for all kinds of emotional release. Football enables people – largely if not entirely men – to build identity, regulate emotional experience, make and sustain connections, and escape whatever their daily grind happens to be. It’s also an immensely powerful source of vicarious experience; studies have demonstrated that fans experience the same hormonal and physiological peaks and troughs as players do. It’s a coherent and contained world of its own, combining the comfort of familiarity and ritual with the excitement and uncertainty of the unknown.

At what price, and who pays it?

Now, me, I don’t fit in at football matches at all. Really, really not. I’ve been to quite a few, as boy is an ardent supporter, and it’s got to the stage where I understand the gameplay enough to be able to follow and find it interesting, and treat everything else – the crowds, the noise, the beer, the freezing cold, the random chit-chat with which I can never join in – as an interesting anthropological experience. It makes me feel sad, because I know how important boy’s team is to him and I wish I could be part of that in a more authentic way, but it is what it is. Put me in a football shirt and I still look mostly like a mildly confused dirty-minded librarian, albeit one who’s taking notes because it’s a world she doesn’t get to experience any other way and other worlds are always interesting.

It shocks me, always, the tribalism*. The key ingroup/outgroup distinction that fuels fan identity just makes me panic, because fundamental to my self-definition is the fact that if any coherent group is shouting loudly I am on the other side. The opposite reaction, though, is expressed beautifully by a friend of mine who’s been going to matches in her hometown since she was tiny:

When I was going through some of my roughest times, the football community gave me something that I didn’t have at home, a feeling of family. No one asked questions, no one made judgements, if you were a Blade, you were in. It was (for want of a better word) “normal” – like, strikingly heteronormative “traditional” NORMAL and everything at home was so upside down and wrong it was so nice to have somewhere to go that made me feel like that.

Trouble is, that ‘normality’ still comes with fairly hefty side orders of misogyny, rape culture and racism. (Trigger warning for those links!) Even for my friend, it’s become too much.

Now, I feel like I have to separate myself a little bit. I won’t accept outward racism or sexism, however, I’ve found that I have to very carefully pick my battles, because quite frankly, I don’t have the spoons to be constantly correcting people. And from the other side, I’ve been made to feel like a “bad” feminist by some people for not doing so, when in fact all I want to do is bloody watch the team I love play the sport I love and not have to give sociological lessons to every Tom Dick and. Harry stood in the pub around me! There’s a certain contingent of due hard fans that just has me banging my head against a brick wall in despair. You know the ones, they outed Ched Evans’ rape victim. And they’re people I know, and usually respect and it’s really fucking difficult to not want to grab them by their neck and shake them because they’re so blinded they can’t actually see what the fuck they’re saying!

For me, and I suspect many others, it’s too much. And so football doesn’t change, and we as a culture continue to socialise our boys into only expressing themselves in certain tones and contexts, and those contexts are often rife with hatred for women and minorities, and suddenly there seems to be no hope anymore.

Thing is, I don’t want to live in a world where vast swathes of the population only feel able to express themselves when strangers are kicking a leather balloon around a wet field. Partly because of my own (female, queer, middle class, hypereducated, mentally interesting) subject position, whilst I’m happy football exists, I would so much rather we had football AND brought children of all genders up to express and discuss and experience their feelings.

I can’t help thinking here of Neil Gaiman’s beautiful essay about reading and empathy. I don’t think football has to be the opposite of reading, let alone empathy, not at all. It’s only some blokes kicking a ball around a field and occasionally shouting, and lots of people (like my boyfriend and my friend) combine the two passions perfectly well. But we seem to be perpetuating a world where football and empathy with the other are forced to be mutually exclusive, and that’s really fucked up.

*I never really found a group I fitted in with until I grew up and discovered geeks and goths who mostly identify as oddballs, and queers with whom I tend to have sexuality and worldview in common.

Editors note: Thanks Sasha for being our guest blogger. You can find more of her writing here. We’ll start with a new guest blogger tomorrow. The illustration above shows four women on a football pitch. Two women in green jerseys are in the periphery of the photo. Two women in orange jerseys are celebrating by chest humping. Thanks Warren Major for the photo.