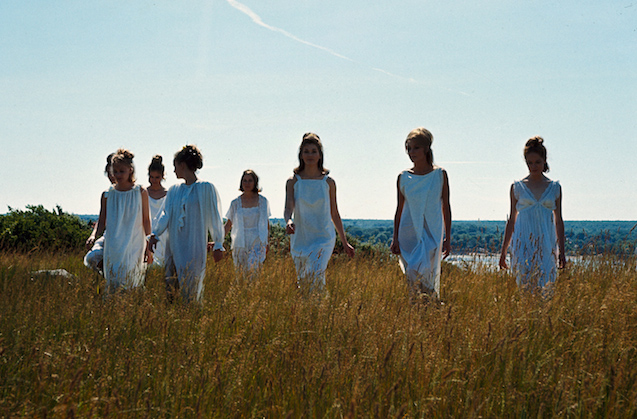 Girls and the city

Some 60 years before Carrie Bradshaw & Co.’s Manolos were hitting the NY sidewalks, there were other, more practical, Great Depression-savvy shoes treading that ground: those of Kay, Lakey, Dottie, Priss, Pokey, Polly, Libby and Helena, heroines of The Group, a best-selling 1963 novel by Mary McCarthy. The book was turned into a film in 1966 by Sidney Lumet, of the 12 Angry Men fame, and is released on DVD by Simply Media on 6 April 2015.

When Virago republished McCarthy’s book in 2009, it was introduced by Candace Bushnell, the writer behind the hit HBO series Sex and the City (whose screenplay was adapted from her column for The New York Observer). Bushnell hails McCarthy’s writing style (including her masterful use of the soliloquy and “razor-sharp descriptions”) and admits to re-reading The Group numerous times, drawn by its continuing relevance. Beyond obvious differences between Carrie and her gang and eight women from the 1930s, Bushnell says perhaps less has changed since the Great Depression than the female metropolitan dwellers are prepared to admit. Every new generation of young women tries to forge their unique identity, and yet the recurring issues they’re faced with still include: sex and contraception, marital issues and extramarital affairs, dealing with “lousy” men (Bushnell’s choice of word!), career versus family, boyfriend/husband versus friends, trying to make it in the male-dominated world of paid employment, moral and political choices.

I think that is why The Group does not feel too dated in 2015: watching it is like witnessing the grandmother of not only Sex and the City but also Girls and other TV series about groups of young women facing the perils of life in a big city (normally New York). Although men and relationships are discussed often, so is everything else. At the time of their release, both the book and the film were criticised for their “triviality” (the book got an especially vitriolic review from Norman Mailer) and the fact that they are about women, none of whom are “interesting enough” to drive the plot and who are all too passive to “force events”. In a parallel universe, McCarthy’s novel remained on The New York Times’ Best Seller list for almost two years. Unlike 1960s audiences, we are living in an age of the TV series, a genre that turned people on screen simply getting on with their lives into art (with shows like Breaking Bad breaking the mould yet again by taking “getting on with one’s life” to a brave new level).

A well-matched ensemble cast enacts the lives of eight female friends unfolding between 1933, when they graduate from Vassar, a private women-only liberal arts college in New York state, and 1940, when World War Two casts its long shadow and forces one of the group, Lakey, to return from Europe. The characters’ white upper middle class families are affected by the economic crisis to different degrees. While Pokey’s (Mary Robin-Redd) father presents her with a plane so she can commute to school, Polly (Shirley Knight) lives in a house full of socialists and helps out her older Trotskyist neighbour, Mr. Schneider. Almost uniform heterosexuality is broken with the character of Lakey (Candice Bergen) who comes back from Europe with a lesbian lover, a rather unsociable Baroness, which the rest of the group finds unsettling. 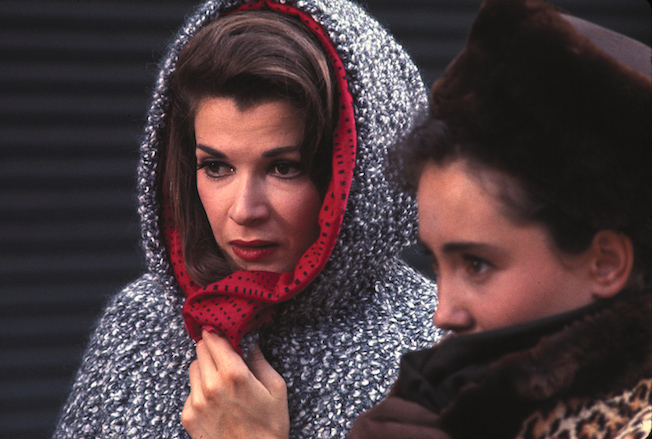 It might seem obvious to us that it was difficult for women in the ’30s to assert their independence against the prevailing domestic and maternal model. Interestingly, in The Feminine Mystique, also published in 1963, Betty Friedan looks favourably at women’s magazines from the ’30s (as compared to those from the 1950s) as they featured more confident and independent women, many involved in careers. This is the case for most of the Group’s members. Kay (Joanna Pettet) climbs the promotional ladder at Macy’s HR department, supporting her alcoholic husband, an unsuccessful playwright and womaniser; Libby (Jessica Walter) perseveres in her career in the publishing industry, despite being told to “marry a publisher and be his hostess”; Polly (Shirley Knight) works as a technician in a hospital, being a paragon of professionalism, always ready to go the extra mile.

The film’s frank representations of female bodies and sexuality that may seem tame to us now (think Girls’ sex scenes) were shocking in the ’60s (even McCarthy’s novel was banned in Australia as an offence to public morals). In one of my favourite scenes, naive Dottie (Joan Hackett) follows the advice of her freshly acquired rascal lover Dick Brown (pun intended, I reckon), and sees a doctor for a diaphragm fitting. Armed with an envelope containing the key to her future liberated sex life, she finds her lover stands her up and, after an anxious wait in Washington Square Park, she leaves the device under the park bench.

What adds to the film’s fresh vibe is the witty, fun and sometimes bitchy dialogue

In another scene Libby, normally portrayed chatting away on the phone in her stereotypically girly, purple chocolate-box bedroom, gets slapped by her aggressive Norwegian suitor, who humiliates her even more after she confesses she is a virgin. Priss (Elizabeth Hartman) goes through two miscarriages before giving birth to a son, only to become a guinea pig for her ambitious paediatrician husband, who is keen to experiment on his young wife with state-of-the-art breastfeeding techniques while completely ignoring how sensitive her nipples are. The film doesn’t shy away from showing mental health problems either, with Polly’s bipolar father harnessing his mania to prepare haute cuisine dinners, as well as numerous discussions of psychoanalysis.

What adds to the film’s fresh vibe is the witty, fun and sometimes bitchy dialogue. “Alright, girls. Let’s get our minds off our plumbing!” cheerfully offers Helena (Kathleen Widdoes) to close the discussion on sexual matters. “Aren’t you a little exposed, dear?” asks Libby of Polly, looking at her cleavage, only to hear the latter’s deadpan: “I think the dress shrunk.” When Polly’s lover, Gus, gets stuck in his psychoanalysis (he cannot remember his dreams) and she asks how his wife’s analysis is going, he answers, a little annoyed: “Hers is going great, she dreamt she went to her analyst’s funeral.” Before losing her virginity to Dick, Dottie comments on a pre-sex small talk: “It’s like talking about anything at the dentist’s to delay the drill.”

High-class cinematography by Boris Kaufman (who shot Lumet’s 12 Angry Men and Elia Kazan’s On the Waterfront) provides, at times, welcome respite from the 150 minutes long unrelenting twists and turns of the heroines’ lives. To a modern viewer, such material would translate perhaps more naturally into a mini series. 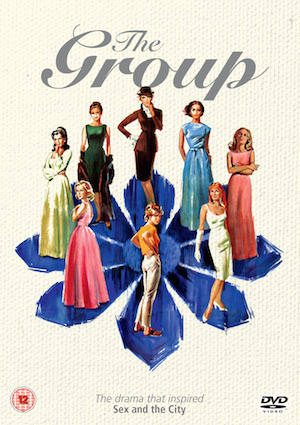 Similarly to Mad Men and other TV series set in the past, The Group suffers from a lack of onscreen diversity: everyone is white and upper middle class, even if impoverished, while the only non-straight woman is absent throughout most of the film and welcomed with suspicion on her return. Misogynistic attitudes, including infrequent physical violence against women, seem as normal as constant smoking. However, the characters are convincing and three-dimensional and I found watching the film a pleasurable experience. You can admire beautifully shot vintage clothes and interiors or wonder, looking back with hindsight, whether in 2015 we’ve really solved that “problem that has no name”.

The Group is released on DVD by Simply Media on 6 April 2015.

All pictures courtesy of Simply Media.

First picture shows group of eight women in the middle of a field on a warm sunny day. They are wearing long white sleeveless slips.

Second picture is portrait of two women, Jessica Walter as Libby and Kathleen Widdoes as Helena, on a cold day. Libby is wearing a grey hooded parka and a red scarf and Helena is wearing what appears to be a fur and a fur black toque.

Third photo is a an image of DVD cover, with a colour drawing of eight smartly dressed women, standing as if on the eight petals of a big blue flower beneath their feet.

This article was amended on 8 April 2015, link to buy DVD was added.

Ania Ostrowska is The F-Word’s film editor. She strongly believes that the more films are made about (groups of) women, the better