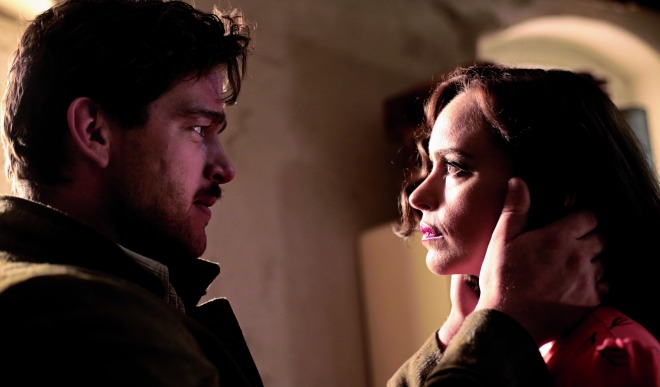 How to play oneself

It’s June 1945 and summer brings new light to war-devastated Berlin as the change of seasons mirrors the big turn in Europe’s history. Auschwitz survivor Nelly (Nina Hoss) journeys back to a home she no longer recognises with a face that’s no longer hers. Her faithful friend Lene (Nina Kunzendorf) drives her home from the surgery, coolly answering the questions posed by a prying soldier curious to see what’s under the bandages of Lene’s covered up passenger. After she peels a bloodied bandage away, the soldier’s face flinches enough for us to see it’s not a pretty sight.

Along with Nelly’s face, her entire family were blown away in the war’s violence that took away almost everything she ever identified with, apart from her husband who has presumed her dead. At the hospital, she is given the peculiar choice of what facial features she would like to be reconstructed with. “A new face is an advantage”, says the surgeon perplexed by her request to regain her former appearance. As she heals and the bandages eventually peel away, so does the thorny story.

Even the scabs can’t hide Nelly’s beauty. She is as delicate as a weathered blossom singed by the sun, trembling in the wind. The crack of a twig sends visible fright through her, reminding us that this is a woman emotionally and physically marred by the Nazi reign she survived. The only fight left in her is to salvage the love of her husband Johnny (Ronald Zehrfeld).

Johnny is seizing the opportunity to finesse his ‘late’ wife

Assuming himself a widower, the stallionesque Johnny finds the audacity to try to redeem Nelly’s family’s inheritance and looks for a woman he can pass off as his wife and who will help him seize the wealth. After Nelly’s return home to the rubble, their paths soon cross but with her newfangled face and quivering disposition, he only acknowledges a convenient resemblance and goes on to recruit her as her own imposter.

Having endured the physical recrafting of her face, Nelly now has to go through the turmoil of her husband reforming her into his blurry recollection. Just how accurate this version of herself is remains murky, but we can’t help thinking Johnny is seizing the opportunity to finesse his ‘late’ wife. Otherwise, his suggestions prove he never really knew her at all.

Like the facile but tightly-wound narrative tightropes of a bitter Roald Dahl novella, tragedy patiently waits to trigger the dramatic irony reserved for the very last beat.

Warning: a slight suspension of reality is necessary in order for the twist to fulfil its potential. Johnny probably should have recognised what was in front of him sooner; in what would’ve been a perfect Cinderella moment, the shoes from Paris that perfectly fit Nelly still don’t make him realise what should be really quite obvious. Hopefully with the licence of art, along with such soulful filmmaking, we’re bewitched enough to ignore the implausibility. Besides, it seems our Mister Geppetto is having a devilish time puppeteering his obedient protege – this is ignorance at its most blissful.

When Nelly catches her new reflection for the first time, she says: “I no longer exist” standing on the neat mess of rubble outside the Phoenix nightclub

Pre-empting any accusation of an unfeasible plot, Nina Hoss (one of Germany’s leading theatre and film actors) says in the film’s production notes: “For me it wasn’t about asking ‘Why doesn’t he recognise her?’ If you’ve been broken to the core then you no longer recognise yourself.”

Nina Kunzendorf (also starring in the recent Woman In Gold) provides a quiet yet stormy strength in her supporting role of Lene (and has a wardrobe which will have glossy magazines cooing in delight). Where Nelly is splintered by war, Lene is hardened, and the little compassion she has left is reserved only for her friend’s rehabilitation. Ignoring Lene’s warnings Nelly uses her feeble strength to try to mend her marriage, leading Lene into an ultimate act of defiance. 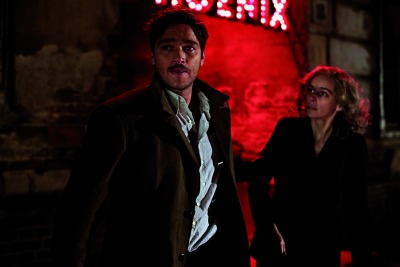 Acclaimed Director Christian Petzold (Barbara, 2012; Yella, 2007 – also with Nina Hoss) does a fine job of exploring reconnection, personal definition and unity in the face of tragedy in a bitter post-war Germany. “In the camps you were ‘dehumanized'”, he says in his production notes, “the Nazis destroyed everything that made you human. How then can you reconnect with the things that defined you?” When Nelly catches her new reflection for the first time, she says: “I no longer exist” standing on the neat mess of rubble outside the Phoenix nightclub – a recurring shot reminding us of the devastation war leaves behind.

Despite the small cast and succinct plot, the themes of Phoenix run deep as this exceptional story with exquisite style and visual vibrancy (possibly thanks to being shot on film) leaves us pondering the complexities of identity, trust and rehabilitation.

Phoenix is released by Soda Pictures in selected cinemas on 8 May.

If you found this review interesting, you may want to check out our reviews of Wakolda (2014) and Lore (2013).

First photo is of a man (Ronald Zehrfeld as Johnny) and a woman (Nina Hoss as Nelly) facing each other as we see their profiles. A man is holding woman’s face in his hands and looking at it with intensity and disbelief.

Second photo is taken on a train station, with what looks like a wooden station building in the background. A woman (Nina Hoss as Nelly) is facing a camera and we see right half of her face, with red lipstick, and wavy dark hair. Second half of her face is blocked by the head of a man who’s facing her, with his back turned to the camera.

Third photo is of a man (Ronald Zehrfeld as Johnny) and a woman (Nina Hoss as Nelly), rushing down the street, with the man pulling woman’s arm so she follows him. There’s a glowing red neon reading “Phoenix” in the background.