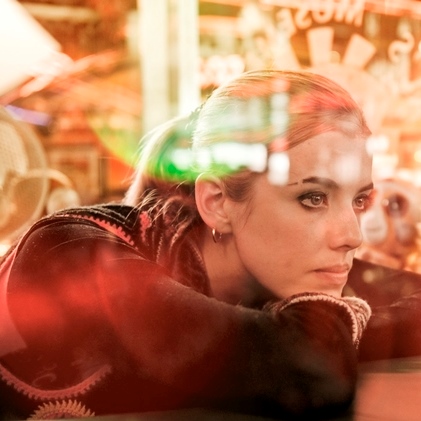 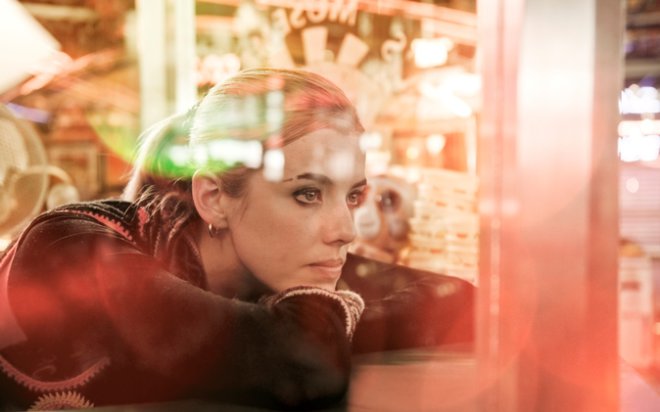 Bryn Higgins’ Electricity is a gritty, emotional, quest narrative whose understated tone packs a punch next to the striking visuals and heavy backstory.
Lily (Agyness Deyn) is a young woman with a history of hard luck and persistent and severe epilepsy. Independent but solitary, she is forced to confront her past when her mother dies. Her mother’s abuse and years of neglect meant only her brother Mikey (Christian Cooke) ever looked after or protected her, and when he is sent to juvenile detention and Lily taken by child services, they are separated for years.

Her mother’s death leads Lily’s other brother Barry (Paul Anderson), who had been almost entirely absent when she was younger, to get in touch regarding their inheritance. Lily’s desire to share this windfall with the absent Mikey starts her quest – traveling from the North of England to London to find him – and her epilepsy provides the major obstacle, as well as inspiring the striking visual style of the film.

Deyn’s portrayal of Lily is full of understated but keen emotion, raw hurt and determination

Lily’s epilepsy includes not just fits but hallucinations, where reality becomes blurred around the edges, giving her visions that have the potent symbolism of dreams, and gaps in memory where hours or days can be lost. Higgins uses a tight first-person camera (handheld), a deteriorated film look and rich, bleeding technicolour to keep the audience bound to Lily’s perspective, sharing her fatalist fear and mental struggle. The audience tries to grasp for what is ‘really’ happening as much as Lily does, being forced to surrender to the lightning and the dark as she does. It’s a profoundly effective technique and well-handled, matched with a few lines of Lily’s almost-detached voiceover as we hear her struggle with her mind before she’s “Alice down the rabbit hole.”

Deyn’s portrayal of Lily is full of understated but keen emotion, raw hurt and determination, as well as an openness and love for other people. Lily as a person-with-an-illness is very well handled. Epilepsy here is shown as an obstacle as well as a perpetual experience that shapes Lily’s sense of the world and her sense of self. We see her frustrations and anger, as well as the desire to push away from the responsibility of caring so relentlessly for a disobedient body. Higgins also wisely includes moments of physical joy, experienced both as simple bliss on her own and in a sexual liaison – happily one which isn’t seen as the ‘reward’ for her quest, but another part of her journey – which allows us to see Lily delight in her body, not just see it as a burden. A friend made in London, Mel (Lenora Crichlow) allows Lily to take the first bath she’s been able to have in years, and her delight in that scene is one of the film’s most exuberant moments.

The relationship between Lily and her brothers is fascinating. On the surface, Anderson’s Barry is a blokey showman, but we see his real affection, along with his guilt and well-meaning mistakes, as he tries to build bridges with the sister he abandoned. Mikey is a cipher. For Lily’s quest, what matters most is what she imagines him to be, what she remembers. When she finally finds him, it is almost abrupt, and not the warm family moment she hoped for; life has clearly kicked the loving and protective side of him to death. 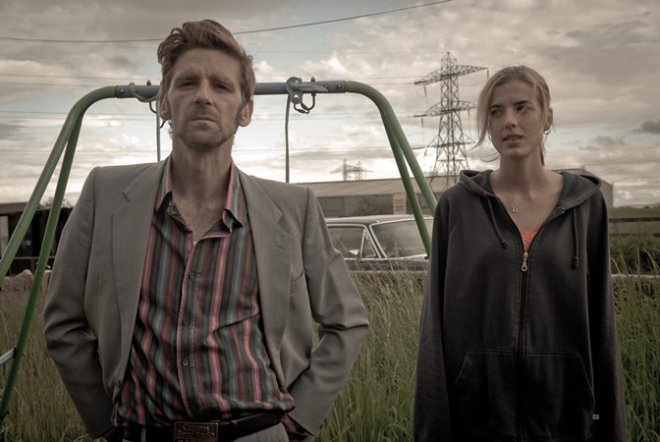 Cooke’s Mikey is an angry disappointed man – his longest scene with Lily is essentially a tripped-out, destructive rage-a-thon. Though we later see regret and a kind of quiet moment of connection between them, the loss of her long held idea of who he is/should be is paramount to her journey. Most often in quest films, it is the man who is the seeker and the woman who is the prize or the MacGuffin. To see a man, who is not however a love interest or a baby, as the MacGuffin for a woman seeker is deeply satisfying.

The supporting figures on Lily’s quest are key to preventing this film from feeling bleak. Tom Georgeson as Al, the gentle boss/friend and father figure, is an understated charm, and his benign presence provides a contrast to all the other men in Lily’s life who leave. Crichlow’s Mel, who appears as a rescuing angel after one of Lily’s fits in London, is also warm, kind and keen to be a friend to Lily, and valuing her friendship in return. I loved that Higgins’ decision to cast Crichlow as lesbian is almost incidental. It’s addressed in the dialogue, but with a quip and a shrug, letting the focus remain on their supportive friendship.

Interestingly, the other ally on Lily’s quest is the National Health Service, in the guise of various nurses and doctors who appear regularly during and after Lily’s bouts, cleaning her up, taking care of her, and pushing her to change her medication (which I was relieved to see addressed in the film – a member of my family has epilepsy and the number of episodes Lily has in such a short period is frankly shocking). It is with the medical characters that we see Lily’s frustration with her illness most sharply – clearly the cumulative effect of too-frequent hospital visits over the years and constant attempts to ‘fix’ her that never quite work. At one point, when asked by a doctor why she’s taken off her ID bracelet, Lily replies: “’Cause I’m not a fucking dog”, which tidily captures the rejection of the impersonal and almost mechanical quality of the system that has kept her alive. While this is the most contentious of her allies, we are shown the NHS as an ineluctable presence, imperfect but reliable.

As with every quest, the goal is never truly finding the MacGuffin, but returning home changed. Lily’s venture to London involved facing her past, her expectations and the limitations of her body. We leave her not with the sense that she is any stronger, but that she has found a peace and acceptance of her family and her past. Higgins’ film is well-structured and cleverly stylised, with sympathetic but rich portrayals of all of its characters, and whose story never relies on the usual easy, sexist tropes. Lily has weaknesses, and does indeed need saving from time to time, but there is no white knight. It is by testing herself that she saves herself.

Electricity is available on DVD and VOD from Soda Pictures

Both pictures courtesy of Soda Pictures, photo Paul Stephenson.
First picture is of a woman (Agyness Deyn as Lily) resting her chin on her forearms on a window sill. She’s looking off camera and the reflection of neon signs and streetlights in the window make the background colourful and bright.
Second picture is of a man (Paul Anderson as Barry) and a woman (Agyness Deyn as Lily), in what looks like an overgrown playground, with a green swing behind them. The man is ginger, has longish hair and a beard, he’s looking into camera. He’s wearing a grey suit and a colourful striped shirt. The woman looks at him with her mouth ajar as if she’s saying something, she’s wearing a too large hoodie. The picture is greyish, the colour of the overcast sky above them.