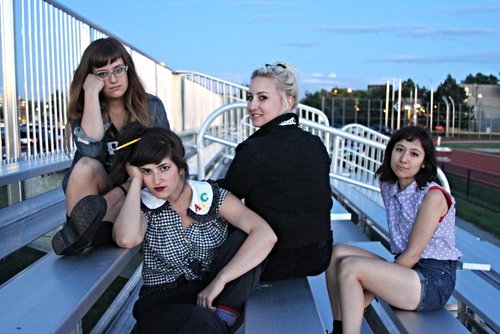 A new set of punk grrrl heroines from Boston, the band Tomboy have been around on the US underground scene for a couple of years now. A four-piece comprised of Ali (Donohue, of Perfect Pussy), Hanna, Madeline and Meghan, their debut EP Sweetie is currently being streamed by US website The Le Sigh, and is due for release in the UK soon. In the meantime, you can also download the EP from Bandcamp or buy as an international order from Ride The Snake records or from Tomboy.

There will be inevitable comparisons with Perfect Pussy, who also orbit the DIY-punk-with-panache end of things, and by the sound of the songs ‘Sweetie’ and ‘I’m in the fucking band’, Tomboy are going to stand shoulder to shoulder with Perfect Pussy’s Meredith Graves when it comes to calling out sexual double standards in rock and in life in general. This is a good thing, in case you’re wondering; we could do with some sisterhood in rock right now.

Tomboy are part of a lineage of punk bands stretching back over 20 years via Sleater-Kinney, Bikini Kill and the wider riot grrrl scene

Both bands are part of a lineage of punk bands stretching back over 20 years, via Sleater-Kinney, Bikini Kill and the wider riot grrrl scene. It’s nice to see that Tomboy have published their handwritten lyrics alongside the EP stream on Le Sigh, similarly to how Bikini Kill used to distribute handwritten lyrics at gigs and print them inside the sleeves of their records, cassettes and CDs.

Opening track ‘Tomboy Anthem’ starts with drawled vocal harmonies and lazy sounding guitars before changing tempo and surging into something resembling the musical lovechild of Bratmobile circa Pottymouth and The Donnas, only with the kind of clean production values that give it the sheen of L7 in their Sub Pop years.

The previously released track ‘Sweetie’, with its low, menacing Stooges style guitar sound, is one of the highlights of what is a very strong set of songs. It comes on like ‘I wanna be your dog’ and the high, deliberately girlish vocals jar with this dark garage rock, creating a deeply unsettling tale of sexual harassment that plays on notions of sugar and spice while sneering, “You call me sweetie, but that’s not what you mean…” The song ends with what sounds like young girls laughing in the playground.

“I’m in the fucking band, I’m not his fucking girlfriend” they snarl, perfectly articulating that all too familiar scenario for many females in bands

The companion piece to ‘Sweetie’ would be ‘I’m in the fucking band’, which, like ‘Sweetie’, is one of the band’s earlier songs. “I’m in the fucking band, I’m not his fucking girlfriend” they snarl, perfectly articulating that all too familiar scenario for many females in bands: the moment when the promoter, the record label guy or the audience member tries to throw you out of the venue or talks to you like you’re the little lady who wants to tag along with the male rockstars. Despite the subject matter, the song is incredibly catchy, and nowhere near as dark as ‘Sweetie’. With lines like “And when you touch my hand, I wanna fucking explode” it sounds a bit like very early Go-Go’s (think ‘We Just Don’t Get Along’ or their very amusing take on ‘Remember (Walking in the sand)’), only in an exceptionally bad mood, or a less deadpan, less sarcastic Waitresses.

Tomboy are more than throwbacks, however, and they have successfully incorporated the influences of their punk and riot grrl foremothers whilst developing their own sound. Their songs are far from retro recreations or museum pieces – every single track sounds fresh, immediate and utterly modern in tone.

As if to confirm this, ‘Bethany’ is a fast punk-pop tale of girl friendship disillusionment in a post Mean Girls and Princess Diaries world: “You pretend to be nice” is the overwhelming message. ‘Can’t stand you’, which follows it on the EP, cements this sense of energy and immediacy, from the classic “1,2,3,4!” shouted intro to the full on thrash of the song, which plays off slower, more harmonious vocals. This track is definitely one to jump around in the moshpit to and with guitar playing of such skill and ease, it’ll either make you want to learn guitar and form your own band or cry.

At the more melodic end of Tomboy’s musical palette are ‘Emma’ and ‘Blue’, which add a little light and shade to the EP. ‘Emma’ comes across as grungy pop of the Veruca Salt variety, with nice harmonies and less overall rock, whereas ‘Blue’ is the subtlest song on the EP, with lots of space and echo. The result is a classic piece of pared down, semi-acoustic indie pop.

There is more to Tomboy than meets the eye. In addition to creating a glorious noise, the group are sophisticated songwriters and accomplished instrumentalists. I hope both critics and fans enjoy them as much as I do.

The accompanying image to this piece is a shot of the four band members who are, left to right: Ali Donohue, Madeline Burrows, Meghan Hynes and Hanna Negami. The women sit on bleachers aside a running track at dusk. Image by Caitlin Bechtel