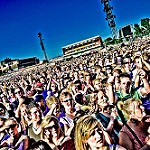 I am sure you remember me; I am the woman you spent most of a recent gig shouting abuse at. I know your name is Chris because I heard your companion use it when she asked you to leave me alone – you know, just before you stabbed your finger towards her face and told her to ‘shut it’. What a charming date you must be. 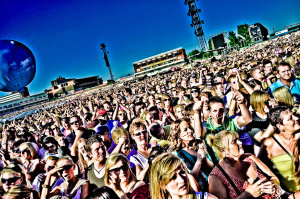 You seemed to have a very different understanding of what took place compared to me, so here’s what actually happened. We were all there to see Take That, a gig that had cost everyone a lot of money to attend. I had taken my sister for her birthday and, although I am not a fan, I was genuinely enjoying the show. I wanted to watch and to enjoy my sister’s delight.

This was hard to do as you kept intruding your body into my space, occasionally into my actually body. At first I simply thought you had no sense of personal space. However, as the night went on I realised that – for whatever reason – you were deliberately imposing your body on mine. It was very far beyond the normal contact at a busy gig. When I stood, you stood, and then you carefully moved in front of me so I couldn’t see. When I sat, you sat and then lent over the armrest until your elbow was in my side or deliberately jabbing into my breast, and your shoulder was forcibly squashing me. It was far beyond what was normal at a crowded gig; you were clearly enjoying imposing yourself physically onto me.

I don’t think you expected me to challenge you. Normally I wouldn’t give you any reaction, normally I would move away. But this was a sell-out gig and there was nowhere for me to move to. I could ignore you and spend an uncomfortable evening pretending you weren’t aggressively targeting me, or I could challenge you. I chose the latter and politely informed you that you were making me uncomfortable. I asked you to stop.

Your outrage that I had dared address your behaviour was instant. You told me I had been trying to get your attention; you told me that I clearly love to seek out drama. When I ignored you, you called me a cunt and then a dyke. Bizarrely, you were keen to let me know that the woman you were with was not your partner – another thread to the confusing knot of your motivation. You watched me relentlessly for the rest of the gig, purposefully craning your head so that I could not mistake your scrutiny.

I asked you to stop, several times. I fetched security and you promised to stop. The women behind us told you to leave me alone and you yelled that women were ganging up on you, you managed to look as though you genuinely felt victimised. What a strange world you live in, where you feel like a victim when women ask that you stop screaming obscenities at them.

Then you moved through all the relentless clichés of the misogynist. You looked sympathetic and asked if I was ‘alright’, literally shaking with rage when I ignored you. You tried to spill your beer on me, although it rather beautifully simply slopped back onto you. You told me I should ‘smile more’. When I continued to ignore you, you screamed ‘fuck you’ into my face. At that point, I finally lost my temper and threw your stupid hat into the puddle of spilt beer. That felt good, although I would rather have not engaged with you, rather not fed your conviction that you had any right to my time and attention. But there is only so much abuse I felt able to take without retaliating.

I don’t fully understand your motivations that night, although I recognise the unpleasant strains of misogyny, bullying and insecurity that made you so desperate to ruin the evening of a complete stranger. I had not offended you; I hadn’t interacted with at all you until you forced yourself on my notice. It seemed to me that the sight of a woman out enjoying herself was some sort of affront to you.

But I want you to know that I recognise you, you nasty little man. You are weak. I think you try to intimidate women because it makes you feel strong. Well, you did not intimidate me, my evening was not about your intrusion; it was about treating my disabled sister to a band she had always wanted to see. However, I wanted to write this letter to you and to men like you, to tell you that the world has changed and is changing more, and there is no place in it for you. Oh, and to say ‘fuck you’. Yeah, fuck you.

All the best,
Felicity

Image attribution: Photo by Kmeron, used under Creative Commons license. None of the people mentioned in this article are pictured here.