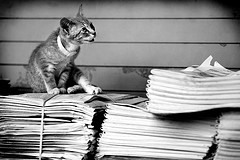 A response to Sarah Vine

Daily Mail columnists are like bad rap musicians: I hesitate before speaking out against their misogyny. If we, as feminists, allow the Daily Mail’s stuffy, misguided, anti-women messages to offend us, we make them controversial, and controversy suggests relevance. It seems unwise to hand them this undeserved kudos. After all, columnist Sarah Vine, wife of politician Michael Gove and Queen of page 17, has declared my opinions null and void before I’ve even begun. I am, in her words, part of the “EFM” (Enraged Feminist Mob), the number one target in her column.

But I’m tired of tossing the newspaper aside and telling George, my neighbour, whose copies I skim-read, that there are cheaper brands of toilet paper available. I have a few words to say about Sarah Vine.

In Wednesday 1 July’s paper, she advises a lady whose husband visited a call-girl to remain with him, as she is an “intelligent woman”. “If the foundations of your relationship are sound”, she adds, “it’s not worth tearing down the walls because of a crack in the plaster”.

She urges women taking part in Gay Pride celebrations not to “go out of their way to look terrible”. She tells us that Lauren Laverne is an unsuitable presenter for Radio 4’s Woman’s Hour because she is a “37 year old blonde”, and this particular radio show is for women like her, who “aren’t as young… as we used to be”. (Sorry to point this out Mrs Vine, but Lauren is included in this category. Also, if her blondeness offends you so much, turn off the webcam)

In an earlier column, she suggests that young women should choose Taylor Swift as a role model, as Taylor Swift is “uncompromisingly feminine”, and that women who roll their eyes at scientists who urge them to have children young are “Touchy Theresas”.

So far, so toxic. But one uncomfortable truth remains: 52.5% of the Mail’s readers are female, a higher percentage than all the major broadsheets and tabloids. Given that the paper is so popular among women, can it really be all that scornful of them? Sarah Vine would say not, and would probably argue that she promotes her own brand of feminism: one based on Conservative values and pride in one’s appearance. As she so forcefully states: “equality is all very well, but it’s no excuse not to brush your hair.”

Praise, where it occurs in her column, is only ever offered to a certain type of female: one who embraces motherhood, is tolerant of infidelity, and conscious of her femininity, even when sleeping. Those who fit the mould, or behave in a way which inadvertently endorses the mould, are celebrated. Those who fall short are scorned and shamed: a casually-clothed Cynthia Nixon “got dressed in the dark”, Judy Murray’s parenting “blunder” is given a 400 word analysis, and women who took exception to Sir Tim Hunt’s jokes about women in science are “stupid, pampered and spoilt”.

This juxtaposition of supportiveness and shaming is a fundamental part of the Mail’s formula, and, perhaps, of its success. Lord Leveson was struck by it, and in his report into the culture and practices of the press, wrote of the “awkward co-existence of the Daily Mail’s support for ‘traditional values’ with the Mail Online’s ‘sidebar of shame’.”

But what damage does this type of journalism really do? Germaine Greer has argued that the mainstream media’s pre-occupation with body shape “matters because women read it, think about it and are constantly insecure about their appearance”. Daily Mail columnists like Sarah Vine deepen this insecurity – they do not limit their criticism to our faces and bodies, but level it at every aspect of the way we live our lives: our mothering skills, our work-life balance, our qualities as partners.

But columns like hers exist as much to goad liberals as to influence her paper’s readership. And in this sense, she has won. I have taken the bait, and become an Enraged Feminist Mobster, a Feminazi, a po-faced Infernal Whiner. Still, it isn’t an outright victory. Over the past few weeks, her attacks on feminists’ views have become more frequent and more vitriolic. And she wouldn’t attempt to smother these views if there wasn’t a fire to extinguish.

The further women flee from the outdated ideal of womanhood she peddles, the more energy she expends trying to get us back into that lovingly crafted iron maiden using nothing but middle class spit-up, cattiness and terrible advice.

Do what makes you happy.

The image depicts a cat sitting on top of a pile of newspapers. It is used by permission of Brittany Randolph under the creative commons license.