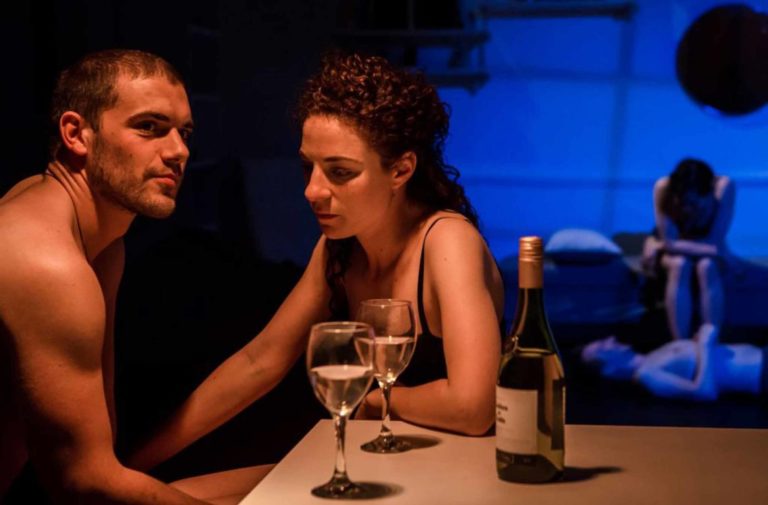 On sex and subjectivity

Sex! Not in everyone’s top three favourite activities, but it’s right up there with sleeping and eating for many. And the more our culture gains an acceptance of and vocabulary for the various ways in which people want to engage in sex, the more potentially complicated the whole dance of physical intimacy becomes.

As people become more comfortable and accepting of varying types of gender and sexual identity (partly thanks to feminism and LGBTQ activism) and ways of being intimate, a whole new world of possibility opens up. Rather than assuming that our gender and sexual preferences fit into a tidy category based on our biological sex, we are now presented with choice and variety, which can be freeing, daunting and confusing all at once.

It is these new choices that playwright Laura Jacqmin examines in her play A Third (currently in a short run at the Finborough Theatre in London). She wonders what troubled water a couple would need to navigate and what new and unexpected dynamics they would need to negotiate if they added a “third” to their happy-ish, monogam-ish twosome.

We meet Allison, tense and vulnerable as played by Asha Reid, and Paul, an understated Jeremy Legat, a married couple who have decided to try having a third join them in the bedroom. This third party is one with whom they plan to engage in sexual activities, defined by clearly expressed rules. The underlying ethos of these rules is that fundamentally the third is something for them – “thing” being the operative word – a sufficiently attractive someone whose wants they don’t particularly need to consider.

There is never any sense of authorial disapproval of any of the sexual desires expressed: no slut shaming or implication that polyamory or swinging is fundamentally unworkable

Allison and Paul have different reasons for trying this game, as they discover while they explore the new territory. They invite two people: Jay, played by a dimpled and appealing Will Alexander, and erstwhile lesbian Mariella, an ineffably cool Lucy Roslyn, to join them, and the play closely follows the moments of awkwardness, intimacy and negotiation among the four, as well as the challenges to Allison and Paul’s marriage thrown up by these circumstances.

Jacqmin’s writing is excellent and well-observed. It beautifully captures the ‘normalcy’ of the various relationships that surround Allison and Paul’s particular atypical adventure. She’s also very witty – there are some really quality one-liners delivered with spot-on timing by the cast. Jay, for example, introduces himself as “Jay – like the letter. Only with more letters.”

Her writing is also very feminist: effortlessly so. Her characters all have broader sexual identities than gay or straight, which is handled with conversational casualness. Throughout the narrative there is never any sense of authorial disapproval of any of the sexual desires expressed: no slut shaming or implication that polyamory or swinging is fundamentally unworkable. Though the play explores problems that arise within the context of adding people to a romantic relationship, they don’t read as inevitable or comeuppance. She portrays her characters and their wants realistically and without judgement.

What’s particularly clever about Jacqmin’s play is that she takes an interest in the way the rules Allison and Paul determine for their own relationship are only part of the story. She shows that at its core, sex is about people dealing with other people however that might be labelled or described; it’s the personhood which remains relevant, and it is the personhood of the thirds – their wants and needs within the confines of the relationship, however carefully constructed – that unavoidably rock the boat. No matter how much Allison and Paul try to ignore their subjectivity, Jay and Mariella are more than props or new toys. Jacqmin incisively imagines how easy it would be to attempt that kind of game playing as a way to maintain control and what the inevitable complications would be.

Director Josh Roche handles the script adroitly; the staging feels natural and overall it’s well paced. I particularly noticed that pauses, be they for sexual tension or social discomfort or both, were well timed. He also makes good use of a small and difficult space. The audience is sat in the round, backs to the wall, in full view of the cast and other audience members, making for a very intimate play indeed.

I would have preferred equal opportunity nudity, so am somewhat saddened that there wasn’t a pants-off moment for one of the men

Designer Avra Alevropoulou turns the theatre into a living room in an apartment with clever design elements that create just the right suggestion of other rooms (bathroom, kitchen) and outside locations (bar, restaurant) when needed. These implicit set changes also rely on Joe Price’s strong lighting design and Kieran Lucas’ tidy sound design, which was very carefully run, noticeable when it should be and subtle otherwise.

The actors all handle the script well, with good pacing and excellent comic timing. They are also to be applauded for handling the physical vulnerability and intimacy the script requires within a space that exaggerates everything difficult about that task. Few things are more challenging than getting naked or nearly so in front of people at most three metres away from you, while maintaining focus on someone you’re meant to be seducing. Yep, there is nudity in this play – earned, but I would have preferred equal opportunity nudity, so am somewhat saddened that there wasn’t a pants-off moment for one of the men.

Roslyn’s Mariella is the stand-out performance; she feels entirely whole, well-developed and present. Everything about her physicality and expression is clear and specific to her character and always entirely natural. Will Alexander’s charming Jay is frankly someone who I wouldn’t mind bumping into in a bar, all toothsome smiles and twinkle. Reid gives Allison a nice balance of tension and determination, and Legat’s Paul has an interesting air – a blend of seeming somewhat uptight while being ostensibly quite the opposite.

The play felt lightly comic and I didn’t quite buy the heights of emotional attachment that would have given the dramatic depth the script seems to require. The love, or irresistible attraction, between some of the characters wasn’t as tangible as it should have been, so the sense of betrayal or fear of loss that motivates much of the latter half of the play was somewhat weak. There was, too, the sense that Legat wasn’t always connecting with his co-actors and that Reid, Alexander and Roslyn were emoting at him.

I did believe the level of comfort between Paul and Allison. They had a lovely ease and familiarity, but it didn’t feel like love – or rather it was more platonic than romantic, though the power dynamics of romantic love that Jacqmin writes were interesting to see play out with that overarching tone. I concede that the lack of passion is a valid artistic choice to explain their sexploits, but it means the play’s ending seems unearned. And while I understood Jay and Mariella’s frustration with being alternately teased and ignored, I didn’t quite believe the level of their attraction to Allison and Paul respectively was enough to motivate the actions they take to get what they wanted.

However, these are genuinely minor complaints. A Third remains a very clever piece of theatre, enjoyable to watch and thought-provoking.

As the play makes obvious, in the greater cultural acceptance of our varied sexual identities and preference, we need more sophisticated ways of communicating our wants and expectations, and an ethical framework that lets us honestly answer the questions of whether we can meet those wants and expectations. This very openness means the usual basics (cheating = bad, penetration = sex) don’t apply. Each couple (or trio or quartet) would need not just rules and guidelines about what is too much or too little for all concerned, but also ways to adapt as time goes by, to recognise and accommodate the feelings of all.

A Third is well worth watching. You’ll certainly laugh aloud and I recommend bringing along a philosophical date (platonic or otherwise) to debate the questions of sex and sexuality provoked by the play. I’d also keep an eye out for more of Jacqmin’s work – she’s good company.

A Third will be playing at Finborough Theatre in London until 20 July.

The photo is by Richard Davenport and shows Will Alexander, Asha Reid, Jeremy Legat & Lucy Roslyn in A Third. In the foreground, a man and women sit facing each other by a table with a bottle of white wine and two glasses on it. She looks down at his chest while he looks into the distance, smiling. He is topless; she is wearing some sort of strappy top or dress. In the background, a man lies on the floor while a woman sitting on a raised platform looks down at him.