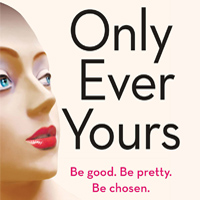 Be good. Be pretty. Be chosen 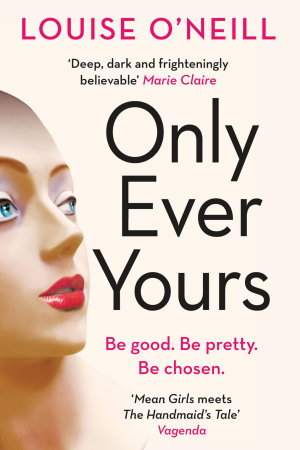 Louise O’Neill’s feminist dystopian novel Only Ever Yours was released last year in a flurry of award nominations and effusive reviews. Now a new ‘adult’ edition with a redesigned cover and an improved blurb and tagline (‘Be good. Be pretty. Be chosen’) has been released in the hope of attracting more readers from outside its Young Adult (YA) niche.

In the world of Only Ever Yours girls are no longer born but designed. Raised in a strict educational institution known as ‘the School’ by severe teacher-nun figures called ‘chastities’, the ‘eves’ are trained from the age of four in the art of pleasing men. Eves are pumped with drugs to help them sleep, regulate their weight and stop their ‘womenstruation’. At the end of their final year, the most highly-ranked girls are chosen to become ‘companions’, serving their husbands until they become useless and undesirable. The rest face a grim fate as a concubine or a chastity.

Freida, one of the highest-ranked girls, is so desperate to become a companion — and so terrified of the alternatives — that she can no longer sleep. From page one it’s clear she is wound so tight by stress and expectation that she is destined to unravel. She used to find comfort in her closest friend Isabel — the #1 eve — but Isabel has become withdrawn, distancing herself from Freida and their classmates. Even worse, she’s started piling on weight, something considered inexcusable for an eve.

Margaret Atwood’s The Handmaid’s Tale has clearly been a strong influence on O’Neill. In this new world, post-societal collapse, women have been reduced to little more than servile breeding machines; even the way they are named shows they are merely chattels to be owned.

The girls are modelled on and named after famed beauties of the old world — Cara, Heidi, Angelina — but their names are never capitalised. It’s so jarring and unnatural to the eye that the full horror of it doesn’t even sink in for a good few pages. That O’Neill does not bother to explain or address it in any way makes it all the more chilling.

O’Neill has drawn on her own experiences with eating disorders and her time in the fashion industry to portray the girls’ unhealthy obsession with their thigh gaps and calorie intake. Freida’s feelings of inadequacy, her constant worry that she does not measure up, that boys will not find her appealing, feel horribly, painfully real. She is passive, weak and often difficult to like but it’s hard not to feel protective and angry on her behalf.

Freida’s lack of strength sets her apart from the current crop of dystopian YA heroines; she is no kickass Tris or Katniss, nor is she a teenage version of Atwood’s quietly defiant Offred. She has been brainwashed so thoroughly that even the idea of political dissent would be utterly alien to her. Any negative thought Freida has is turned inward instead: she resents the system only because she is not ranked #1 eve. There are hints that, given the chance, she could rise above the vapidity of her existence — she has an inquiring mind and a sarcastic wit — but she never dares to risk rejecting her assigned role or not fitting in.

But it would be unreasonable to expect her to do a Katniss and overthrow the system. The School teaches the girls only how to look pretty, stay skinny and serve their men. At first their reliance on video chat and voicemail seems perfectly normal for a futuristic setting, until it becomes clear that the girls have never been taught to read. As a child Freida hears the word ‘math’ and has no idea what it means; the closest she’ll ever get is learning how to count the kcals in her breakfast. We can hardly expect her to rail against her oppressors when she has never been permitted to think. “Thinking too much robs you of your beauty,” she is told by the tyrannical Chastity-Ruth. “No man will ever want a companion who thinks too much.”

O’Neill holds up a dark mirror to our own world, highlighting the myriad ways women and girls unwittingly, uncaringly, support a system that strives to keep us in our place

Unlike most dystopian tales in which the protagonist has a secret place to escape to and speak freely, there is no respite for Freida. Even at night, while the girls sleep, messages are pumped in nonstop over the PA system: “I am a good girl. I am appealing to others. I am always agreeable”. The psychological torment is unrelenting, Freida’s inevitable mental collapse utterly harrowing.

The misogynistic new order in Only Ever Yours works beautifully because the girls — and their guardians — buy into it with near-religious fervour. They sing along to a rap song objectifying women and deride a reality TV star for admitting her husband hit her (“He’s yummy… he could hit me any day he wanted”). When snide, ruthless Megan calls another classmate a feminist it’s the worst insult she can think of; even Chastity-Ruth feels “using the ‘F-Word’ was a little excessive”.

These young women will never band together against the patriarchy; they’re far too busy competing amongst themselves. And that’s just the way the men want it. O’Neill holds up a dark mirror to our own world, highlighting the myriad ways women and girls unwittingly, uncaringly, support a system that strives to keep us in our place.

The casual racism and biased standards of beauty she depicts are all the more abhorrent for being only a chemically-straightened hair’s breadth from what we see today. Brown-skinned Freida (“541 Delicate Iced Chocco hair, #66 ChindiaYellow eyes”) is considered a less appropriate candidate to become a high-ranking companion than pale Megan, while her non-white classmates are shunned and criticised (“Your skin is too dark, Naomi… I think that you should ask about some lightening cream”). In a moment both disturbing and deeply sad, Freida envisions taking a grater to her own skin, then at least “[her] bones might be white enough”.

When the ‘Inheritants’ arrive to choose their brides, O’Neill also touches on how the system hurts men and boys. While they are seemingly free to look and behave however they wish, they are still expected to adhere to a certain type of virile, traditional masculinity. They get off lightly compared with the eves but they are victims of the system just the same; their perceptions warped, their personalities tightly reined in. Crying, being “a pussy” or showing “aberrant” behaviour is not tolerated.

The satire in Only Ever Yours isn’t subtle and the references to our world are sometimes a little too of their time; there is a meaning (sometimes a dark joke) behind every eve’s name but it’s unlikely readers a few years down the line will catch them all.

O’Neill has certainly had a twisted kind of fun in choosing her characters’ names: Megan is dark-haired and a favourite with the boys; the girls who share their names with Victoria’s Secret models dream of becoming concubines; androgynous, short-haired Agyness comes last in every ranking.

Agyness, ridiculed for her belief that “personality matters” and her aversion to the kind of game-playing Megan thrives on, is easily the most likeable character in the book. As much as any girl can in this world, she seems to genuinely like herself — you long to snatch her up from the pages and whisk her into a kinder world.

Like the best satire, and the best dystopia, it is blisteringly angry and close enough to reality to make readers confront some uncomfortable truths

The other girls are somewhat interchangeable though and it’s hard to keep track of which is which. Their endless discussion of outfits and makeup becomes wearing after a while; although it drives home the point that the girls have nothing else to talk or think about, the lack of character depth or development frustrates.

The most underdeveloped character of all is Isabel, and sadly the book suffers for it. The plot — and the reader — cries out for more of her but she remains elusive throughout. She is the person Freida has always been closest to, yet we don’t see enough of her — or of their relationship — to care about her eventual fate as much as we should.

It’s the book’s biggest flaw, but it doesn’t make Only Ever Yours any less bleak, unnerving or likely to stay with you long after you finish reading. Like the best satire, and the best dystopia, it is blisteringly angry and close enough to reality to make readers confront some uncomfortable truths. Every time you spot a billboard asking if you’re ‘beach body ready‘, every time you pick up a gossip mag with celebrities’ wobbly bits ringed in red, every time some ‘expert’ suggests we can cure teenage girls’ self-esteem issues by having boys describe to them their idea of female perfection, your thoughts will stray to Freida and her sisters. Be warned: this book will haunt you for a very long time.

Only Ever Yours is available now, published by Quercus. Louise O’Neill’s second novel, Asking For It, is due for release in September 2015.

The image shows the front cover for the adult edition of Only Ever Yours. It features the face of a light-skinned, blue-eyed female mannequin in half-profile. She has heavy eye make-up and glossy red lips. Her expression is blank and passive.