Sculpture in a different world Among the early formative memories of my childhood, Barbara Hepworth’s art features prominently. Visiting her sculpture garden and museum very early one morning, during a family caravan holiday in Cornwall, I was given a 2B pencil and a notebook. I spent the day half-sheltered in a slightly damp patch beneath Hepworth’s ‘Four Square (Walk Through)’ piece, naïvely sketching all manner of pierced stone forms and moist foliage. Her sculptures appeared to be born from the ground and shaped by the coastal landscape itself. Shallow dips and wells in each surface would fill with rain water, giving fabricated structures the properties of naturally occurring stones, woods and metals. It was an engaging and physical experience.

I have been eagerly anticipating Tate Britain’s latest offering Barbara Hepworth: Sculpture for a Modern World, but approached the exhibition with ambivalence. I find retrospectives tricky. The chronicling of an artist’s entire career curated, as is often the case in these larger gallery shows, alongside rare family photos and biographical wall texts blur the line between life and art. Not that the two should remain separate necessarily, but one’s perception of the work cannot help but be dictated by a gallery space loaded with context.

Visitors can study a practice through notable stages of its development, a privilege in as many ways as it is stifling. How wonderful to have the opportunity to see rare or little known artworks sourced internationally. Conversely, how academic, how authoritative and linear. How seemingly un-Hepworth.

Until her death at the age of 72, Barbara Hepworth’s practice was one of continuous development, always refining, always exploring new materials and landscapes. Sculpture for a Modern World presents the largest overview of the artist’s work in London for almost fifty years. Spanning seven rooms, the exhibition details particular facets of her practice, including her relationship with painter Ben Nicholson, experiments with works on paper, her role in an international avant-garde movement, involvement with Paris based collective Abstraction-Création and a series of designs for the stage.

Hepworth was born in Wakefield, Yorkshire in 1903. In the 1920s she studied at Leeds School of Art followed by the Royal College of Art, London: some of her earliest surviving carvings from this period, alongside those of her peers, including Henry Moore, are exhibited here. 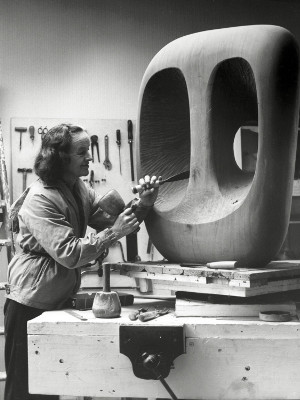 As one of the UK’s most well known and admired artists of the twentieth century, it seems unnecessary that the first two rooms are dedicated to Hepworth’s relationships with her male contemporaries. She and Ben Nicholson, throughout their marriage, shaped one another’s practice, and a selection of the work they made while cohabiting is exhibited here. The relationship between sculpture and painting that is documented through these pieces appears to be an ongoing process of investigation, a fascinating period in Hepworth’s work of which I had not previously been aware. However, perhaps due to the biographical nature of the exhibition, their marriage becomes the focus, with their personal photo albums open in vitrines, enlarged prints filling the walls.

The classic sculptural trend, that of the ‘mother and child’, features sporadically throughout the exhibition, with examples of Hepworth’s subtly subversive take on this archetype. By carving the infant and the mother from separate stones instead of from one piece, Hepworth highlights a sense of lack or separation. ‘Mother and Child’, 1934, simply suggests a hollow in the mother’s belly: a curved, almost triangular shape no larger than a fist, pierced through the middle.

Later, it is suggested that Hepworth returns to the theme in ‘Corinthos’, 1954-5 and ‘Curved Form (Delphi)’, 1955 carved from a heavy guarea wood, perhaps a cathartic tribute to her son, Paul Skeaping, who died in a plane crash the previous year. Certain narratives may be projected onto the work, informing how each piece is perceived. These enormous sculptures alone possess a weight and depth, only exacerbated by this harrowing context.

There is footage of Hepworth working in a well-lit studio and carving large pieces in her garden, which seems to be a world away

In the late 1930s and 1940s Hepworth became interested in a dialogue between colour and form. With oil colour applied to certain surfaces, primarily the inner contours of pierced sculptures, the work reflects the colours and tones that are found within stone and wood. The effect is intriguing and seductive. The selection of the painted concavities exhibited form a sort of self-referential constellation. Addressing the natural landscape, working with a limited range of colours and experimenting with application is perhaps evidence of a sculptural language in the process of being formed.

The formal landscape is integral. Sculpture for a Modern World seeks to expand the general understanding of Barbara Hepworth as associated with St. Ives and Yorkshire and the coastline, but in doing so, begins to take the landscape out of her work. Each sculpture on display embodies such robust tactility, such a ruthless but trusting approach to the material, that it is almost frustrating to see them confined within a series of chronological, windowless rooms. There is footage of Hepworth working in a well-lit studio and carving large pieces in her garden, which seems to be a world away. 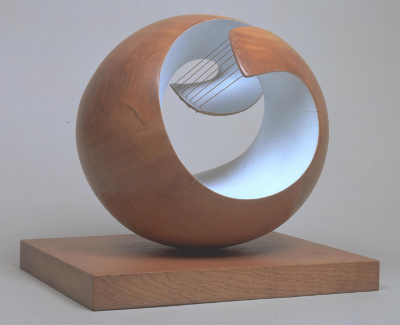 A selection of photographic collages demonstrate the ways in which Hepworth envisioned her work would be displayed, investigating both natural and architectural environments. This interest is explored in the final room of the exhibition which partially reconstructs her 1965 retrospective in the Netherlands, complete with a re-staging of Gerrit Rietveld’s modernist pavilion by architecture students from the Royal College of Art.

Despite my reservations, the enduring quality of Barbara Hepworth’s work ensures that the exhibition maintains a captivating sense of physical space. Her sculptures still provoke an emotional response. In room five I spend time watching ‘Figures in a Landscape’, a 1953 documentary on Hepworth’s work directed by Dudley Shaw Ashton, with words by archaeologist Jacquetta Hawkes. Narration paired with a series of dramatic images – single sculptures standing on a clifftop or beside the sea – accurately identifies the powerful forces that Hepworth’s work alludes to. From the film I scribbled a line on my press release: “they give them the shape of the earth and its tides”. Though ambiguous, this elucidates the enormity, the physicality and, ultimately, the temporality of both the landscape and of sculpture. I think there are certainly areas where Sculpture for a Modern World comes close to this sensation. There is something in the canonical structure of the exhibition however, that cannot quite reach it.

Barbara Hepworth: Sculpture for a Modern World will be at Tate Britain until 25 October 2015.

All images are © Bowness.
Image 1: Curved Form (Delphi) 1955 by Barbara Hepworth. A curved piece of art not unlike a lyre, with a very deep red colour on the exterior and flecked white interior and several string crossing the void from the top to the centre.
Image 2: Barbara Hepworth in the Palais de la Danse studio, St Ives, at work on the wood carving Hollow Form with White Interior 1963. Photographed by Val Wilmer.
Image 3: Pelagos 1946 by Barbara Hepworth. A spiral contained within a spherical space, with an elm exterior and white interior, on an oak plinth. Strings or wires connect the two ends.