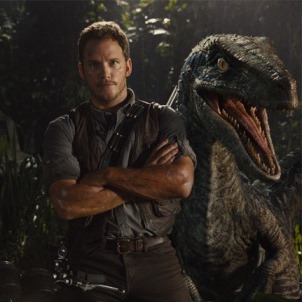 Jurassic World and the man-o-sphere

Nowadays the internet is awash with sites set up by “men’s rights activists” – sites which are known collectively as the “man-o-sphere”. Here the social frustrations of a traditional machismo go hand in hand with sexual ones. The standard, bilious ranting about “Femi-Nazis” and a culture which has been fatally undermined by “PC-propaganda” is accompanied by long screeds on how to reassert male dominance: “seduction seminars” that aim to provide frustrated, angry men with a sure fire set of procedures by which female targets can be tricked, manipulated, pressured or cajoled into sex.

In a piece for The Guardian, Jason Wilson describes the modus operandi which underlays the endeavour:

“[I]t conceives of the path to sexual intimacy as a kind of video game walkthrough, where if you learn to press the right buttons in the right sequence you’re bound to ‘win’…premised on the idea that women are basically lab rats who will reliably respond to certain stimuli. Anyone who disputes this idea and any evidence to the contrary – like women’s increasing economic success, and sexual and social confidence – are anathema”

What is interesting here is the marriage of the technological and the modern with the archaic. A rather old-fashioned, almost 1950s, brand of gender conservatism – women are essentially passive, docile, awaiting the moment in which a raw and untamed masculinity will make them go weak at the knees – is combined with the pseudo-science of the self-help industry and the slick, banging vibe of the latest video game. 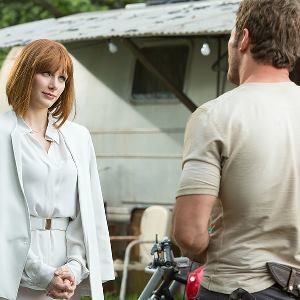 But it isn’t just furtive and conspiratorial backroom websites that have channelled this vision. When watching the latest Jurassic Park film, Jurassic World directed by Colin Trevorrow, it is hard not to be struck by the way it has so successfully harnessed the same zeitgeist: a combination of antique gender roles and traditional family values set against an image of modernity and scientific prowess and the frenetic, frantic but ultimately soulless narrative of a World of Warcraft video game.

At the start of the film we are introduced to the female lead character – park manager Claire Dearing (played by Bryce Dallas Howard). Dearing is career-minded, ambitious, independent and driven. But these qualities are presented as rigid aberrations set against the willowy template of a softer and more yielding femininity. In fact Dearing has grown so frigid with ambition that she has lost the ability to enjoy the very rituals that confer upon her an essential nature as a woman.

When she goes on a date, for instance, rather than slipping misty-eyed into her lover’s arms, she draws up an absurd and bureaucratic rota by which the evening is to be structured – annulling the sense of romance that, to a ‘real’ woman, should come spontaneously and easily. Or when her nephews – the teenage Zach (Nick Robinson) and his younger brother Gray (Ty Simpkins) – come to visit the dino theme park, Dearing palms them off on an assistant because she is too busy with work and cannot appreciate the important things in life. When her younger nephew Gray finally catches sight of her and runs over to enthusiastically embrace her, Dearing hesitates and shies away from the baffled little boy. At which point we are treated to a lingering and meaningful shot: the career woman bereft of the most fundamental feature of womanhood as espoused here – ‘natural’ maternal devotion.

And perhaps this, more than anything, is what Jurassic World is most concerned with: notions of ‘the natural’ and their counterparts. The main monster antagonist takes the form of a vicious hybrid, a chemically and biologically altered super predator Indominus rex that represents an artificial amalgam of several other species; consequently the animal is possessed of a malevolent, lethal and above all unnatural intelligence. 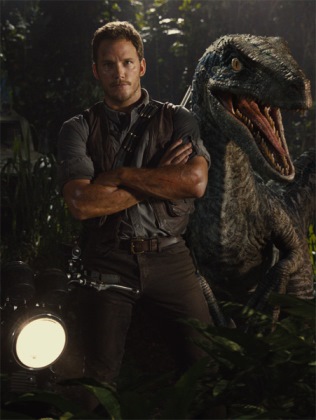 Charged with containing the creature after it escapes, the rugged, lantern-jawed gamekeeper Owen Grady (Chris Pratt) is also tasked with restoring the order in nature which the creation of this creature has breached. Grady is able to control the other animals in his care precisely because he is attuned to the natural equilibrium – he is able to register its hierarchy, respect it, and even integrate himself into it. When he presents the caged raptors to Zach and Gray, the smaller boy, wide eyed and credulous, asks the gamekeeper : “Who’s the alpha?” Stone-faced and entirely bereft of irony, Grady’s rugged features crinkle into smug self-assurance: “I am,” he rasps huskily.

Grady repeatedly humiliates and berates Dearing for being such a frigid, career-driven witch

The more underlying point the film seems to be making is that Claire Dearing is every bit as much an aberration as the Indominus rex itself, for her ‘feminine’ DNA has become equally warped, equally corrupted. This represents another rupture in the natural order that the ‘alpha’ male Owen Grady is once more assigned to correct.

As a consequence, Grady repeatedly humiliates and berates Dearing for being such a frigid, career-driven witch, and this – alongside several displays of save-the-day masculinity on his part – eventually melts her back into a soft, gooey mush of ‘natural’ womanhood. With the balance restored, Dearing is now able to appreciate the beauty and wonder of the creatures Grady is enthusiastically slaughtering left, right and centre with his high-powered machine gun. She is able to swoon and simper as he goes about the urgent business of keeping them alive. But most importantly of all, her maternal instinct is revived.

There is, however, one final scene where Dearing comes dangerously close to asserting her autonomy again. She snatches up a shotgun and shoots a bird lizard engaged in a ferocious peck-off with Grady, thus saving his life. As soon as Grady grasps the full horror of what has just happened, he charges Dearing, before lip-sucking her so furiously that the possibility of any future display of self-determination on her part is lost forever amid the sound of her moist, moony sighs.

At which point you can’t help but feel the rugged, lantern-jawed gamekeeper might have clocked up a good few hours on the man-o-sphere himself.

Both pictures are from http://www.jurassicworldmovie.co.uk/ | Universal, all rights reserved.
First picture shows a woman (Bryce Dallas Howard as Claire Dearing) wearing white (a shirt, trousers, belt and jacket), with ginger bob with a fringe. Her hands are clasped in front of her lap and she looks off camera, probably listening to a man whose back we see. It’s a broad back in a khaki long sleeved top, there’s also a knife pouch around his waist. They’re outside and there’s a bit of something that look like a motorbike or some other machine between them.
Second photo is of a man (Chriss Pratt as Owen Grady), with his muscular tanned arms crossed on his chest and some weapon hanging at his belt, standing in the forest, in the night (there’s a reflector to the left, lighting the scene). There is a dinosaur with its mouth open standing behind him.