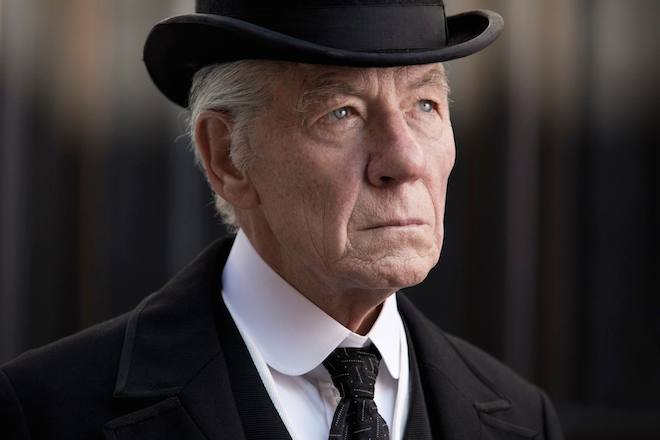 What about Mrs Munro? 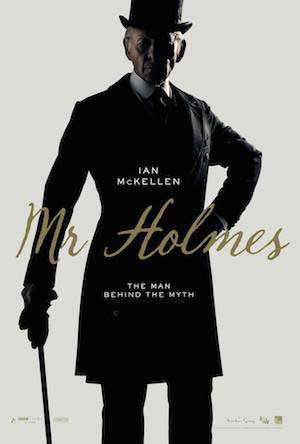 Bill Condon’s Mr Holmes (2015) has a lot to say about fathers, mothers and about what it means to be a child. Actually, not a child – a son. Because while this is an intricate, engaging film that deals with mystery, memory, aging and the decline of physical and mental health, its portrayal of relationships is deeply gendered.

Female characters are underrepresented in Condon’s film, just as they are in the TV series Sherlock. Where they exist, their gender is vital: in Mr Holmes, the two main female characters are defined by their roles as mothers. Ann Kelmot’s (Hattie Morahan) grief for her two miscarried pregnancies distances her emotionally from her husband, causes her to act in ways her husband interprets as obsessional and prompts him to engage the services of Sherlock Holmes. Mrs Munro (Laura Linney) is also only important to the plot of the film as mother of Roger. As the detective’s housekeeper and neighbour, she exists to care for Roger and Mr Holmes. Her time seems to be entirely taken up with meeting the domestic and practical needs of both her son and the older man. In this way she fulfils a role familiar to many women in Britain today, who are known as members of the “sandwich generation”, caring for both children and elderly relatives.

The film’s interrelated plots are driven by the longing for connection with lost parents or children, built into the family dynamics between Thomas and Ann Kelmot and those of Masuo Umezaki (Zak Shukor) and his parents. In the Kelmot family case, Ann’s grief for her children distanced her from her husband and caused her to desire her own death. Years later, in 1947, Masuo Umezaki persuades Mr Holmes to travel to Japan, apparently to visit his mother and to search for the prickly ash plant. However, Masuo Umezaki’s primary motivation becomes clear when he acknowledges that his father abandoned him when he was a child, claiming that Sherlock Holmes had encouraged him to stay in London. Just as Thomas Kelmot wanted the detective to explain his wife’s absence and make his marriage the way it used to be, Masuo Umezaki wants Mr Holmes to explain the loss of his father. These stories aside, I want to focus on the relationship between Mr Holmes and Roger.

Mr Holmes’ domestic arrangements reflect those of a traditional nuclear family with a husband, a wife and a child. Roger is about eight- or nine-years-old, a developmentally significant age for children at which they start asserting their own identity by making independent judgements about the world. Roger’s father entered the RAF and died in an airplane crash during the second world war and he barely remembers him. The boy is curious about the world and about Mr Holmes, who welcomes his curiosity. In the first exchange between them we learn that Roger has gone into Mr Holmes’ study and read his handwritten case notes. He asks how Holmes knew the man had “come about his wife” and is told that the clues lay in the visitor’s freshly pressed clothes and the deduction that the man wasn’t capable of ironing his own clothes and couldn’t afford a servant. As they share wry, knowing smiles, the relationship between the elderly man and the young boy begins with the mutual understanding that women exist as unpaid servants who meet the practical needs of men.

Interactions like this between Roger and Mr Holmes point to shifting power dynamics within the family unit, as Roger learns to identify with his father figure and withdraw from his previously close relationship with his mother. He emulates Mr Holmes in eating the prickly ash plant, correcting his mother’s mistake when she forgets its name and spitting out the food she has provided for him. As soon as he returns from a shopping trip with his mother, Roger throws down a book about the RAF she has bought him, which lies unread in the hallway while the boy rushes outside to spend time with Mr Holmes and his bees. Very soon after this scene, Roger enthusiastically talks about Mr Holmes’ vast library of books. Consciously or unconsciously, Mr Holmes colludes in Roger’s rejection of his mother by imparting knowledge to the child and sharing the pleasure of their secret knowledge. Roger asks if the bees will bite him and Mr Holmes replies that bees do not bite but sting and the difference is that, unlike a bite, the sting is left in the wound. When Mrs Munro makes the same mistake as her son moment later, the man and boy share another wry, knowing smile. As in their opening exchange, this is a shared joke that marginalises and excludes a woman. 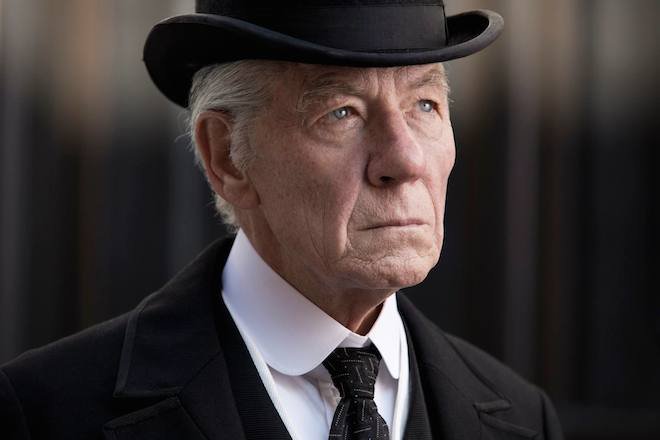 This pattern of shared understanding between Mr Holmes and Roger reaches a dramatic climax when Roger pushes Mr Holmes to “do his thing” to his mother: he wants the detective to observe Mrs Munro’s clothes and appearance and deduce where she has spent the day. Mr Holmes appears reluctant – his facial expression and repeated refusals suggest that he knows the knowledge will upset Roger – but despite this he does disclose the information that Mrs Munro has spent the day in Portsmouth arranging for both her and Roger to start a new life. Roger wants to stay in their current home, but it seems that their existence there is dependent on Mr Holmes. Roger’s mother wants to move to work in a busy tourist area, presumably for the chance of greater financial security. She is persuaded to stay when Mr Holmes tells her he will leave the house and grounds to her after he has died, therefore granting security and continuity for her and Roger.

The closeness between Roger and Mr Holmes is touching because it appears to meet both Roger’s desire for a father figure and Mr Holmes’ need for the reassurance of feeling valued despite his growing fragility. Roger’s curiosity about the detective’s last case enables him to re-tell the story which helps him to remember the ending and therefore find a sense of resolution. In addition, there are moments in which Roger helps to mask Mr Holmes’ failing physical health. After saving his life by rescuing him from a fire, Roger helps to care for him and at one point hides the evidence of a fall from his mother.

Freud argued that children grow up with their mothers as their first “love object”. They are dependent on their mothers’ care and first grow to understand that they are independent people when they realise that they are separate beings from their mothers. For Freud, a critical part of growing into maturity is the rejection of the mother in favour of the father. The mother represents dependence, emotionality and childishness, while the father is independent, in control and rational. Many feminists, including Juliet Mitchell, have pointed out that Freud’s model does not explain the psychological development of girls who must surely reject the mother whose body they also identify with. For boys, however, who are biologically different from their mothers, this model is easier to apply.

As feminists we need to be clear about why these representations are important. In a film that covers so much ground, and is after all set in 1947 when attitudes were different, is it unrealistic to expect a wide range of female characters to be depicted, and to explore the complex ambitions, motivations and changing desires of secondary characters such as Mrs Munro? There are clearly limitations to the amount of action that can be portrayed in a film before the narrative becomes chaotic and we can no longer make sense of what we are seeing. However, what fascinates me is how writers, filmmakers and viewers respond to these limitations. Mr Holmes follows the pattern of many mainstream popular films and novels in privileging male stories, telling the stories that meet the needs men have of narrative, and therefore marginalising storylines relating to women.

Underlying the exclusion of rounded female characters from the film is a subtle but persistent thread of misogyny which is passed on from father to son. This both helps the little boy to transition into adulthood by becoming independent from his mother and soothes the older man’s anxieties about his diminishing significance and abilities. The mother’s own needs, however, remain undefined, let alone met.

You may still be able to catch Mr Holmes in your local cinema.

Both images are from Mr Holmes official Facebook page and may be subject to copyright.
First picture is a film poster for Mr Holmes: a silhouette of a man, his face in the shade, leaning on a cane with his right hand and with his left hand on the hip. He’s wearing black dress-coat and a top hat. Lettering: “Ian McKellen/ Mr Holmes/ The man behind the myth”.
Second picture is a close-up of a face of an elderly man with intensely blue eyes, looking up. He’s wearing a black hat, black jacket, white shirt and black tie. It’s Ian McKellen as Sherlock Holmes.