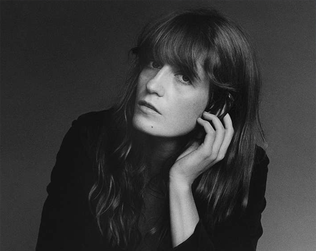 Florence + the Machine Vol III: in which our heroine is wounded on the field of love, but learns to dance

It’s the artwork on the cover to the album that’s the first indication of a shift in tone for Florence + The Machine on this, their third, album. While Lungs featured a sleeve that married pre-Raphaelite elegance with Edgar Allan Poe, and Ceremonials referenced Tallulah Bankhead, Pre-Code Hollywood and Virginia Woolf, the black and white starkness of How Big, How Blue, How Beautiful reflects the equally stark, stripped back nature of many of the songs. Welsh’s pose on the cover is also telling: it is pure late 1960s psychedelia, 50% Grace Slick and 50% Syd Barrett.

What’s most immediately noticeable about the songs is the subdued drums. The band are still making rhythmically complex songs with strong percussion, but the drums no longer dominate the sound. A previously missing horn section take their place, shifting the songs in a different, but by no means unpleasant, direction.

Whereas Ceremonials was very much a winter album, How Big, How Blue, How Beautiful is (like Lungs) a summer album, and this shift towards subtlety reflects the season, most notably on tracks such as ‘Queen of Peace’ and ‘Long & Lost’ which are both highly evocative of warm days and sultry summer evenings. They were perfect for an unusually warm and sunny Glastonbury Festival earlier this year, at which Florence + The Machine found themselves headlining the Pyramid stage on the Friday as a result of Dave Grohl breaking his leg and the Foo Fighters’ subsequent withdrawal from the festival. A suitably radiant Welsh raced around the stage like an energetic firefly in the darkness, the band turned in a fantastic set and, judging from the BBC footage, the crowd loved it.

The album opens with the single ‘Ship to Wreck’ which represents a jangly, indie pop collision with Jefferson Airplane and rueful lyrics by a love bruised Welsh. The single is the middle chapter in a trilogy of videos with a continuing story, beginning with ‘What Kind of Man’, concluding with ‘St Jude’. The jangly tune belies the at times sad lyrics, but it’s a quietly unassuming single that grows on you with repeated listens.

The force of nature that is ‘What Kind of Man’ follows, which is the first single from the album. A stark, angry, jagged and raw slice of rock, the song makes unusual use of horns, which set a strident pace that is matched by the basic jagged rock guitar riffs. The overall result is textured and complex, with Welsh alternately crooning and howling in one of the most truthful and emotionally raw vocal performances of the year.

Speaking of her motivations for writing the track ‘How Big, How Blue, How Beautiful’, during her Glastonbury set, Welsh said she wrote it at a time when she was in love with life and with everything around her, rather than with a person

Title track ‘How Big, How Blue, How Beautiful’ is an elegantly soulful piece overlaid with overtones of 1960s idealism and influences of Tommy James and the Shondells’ ‘Crystal Blue Persuasion’ or California Sunshine Pop bands such as the Peppermint Rainbow and the Lemon Pipers. Speaking of her motivations for writing the song during her Glastonbury set, Welsh said she wrote it at a time when she was in love with life and with everything around her, rather than with a person. It’s an optimistic song, one which paves the way for the excellent ‘Queen of Peace’, the standout track of the album.

A blissful summery blend of northern soul and Haight Ashbury, ‘Queen of Peace’ is a gorgeous, evocative song blessed with lovely horns and gorgeous melodies. Welsh peaks vocally, sliding up and down the octaves with ease, her excellent phrasing precise and seemingly effortless. Part Love’s ‘Alone Again Or’, part Tobi Legend’s ‘Time Will Pass You By’ and part Siouxsie and the Banshees circa 1988, ‘Queen of Peace’ is a complex, subtle and beautiful listen.

This is followed by ‘Various Storms & Saints’, which begins very quietly with just voice and sparse guitar, later enhanced by minimal strings. It showcases Welsh’s voice beautifully, and the overall effect is both emotional and contained. The urge to transform the piece into a full orchestral gothic production of roaring tempests and thunderstorms has been resisted and, while this may have been consistent with the bands earlier output, it feels like a more courageous musical decision.

‘Delilah’ is another strong track, marrying Florence the soul girl with Florence the fan of gothic imagery. It features very effective use of call and response, but also an atmospheric and gothic chorus. Rather than heading towards full blood curdling exorcism a la ‘Seven Devils’, it takes an incongruous swerve towards Motown. While the lyrical imagery often conjures up someone staring into the void, the song is incredibly upbeat, overall. It shouldn’t work but the result is incredibly effective. This is a future single if ever there was one and, of all the songs on the album, this is the one that most obviously builds on ground prepared by both Ceremonials and Lungs.

Less is more when it comes to ‘Long & Lost’, a pared down, subtle piece built exclusively from voice and guitar. Silence becomes an instrument in itself and the spaces in the song increase its sense of atmosphere and tension. It feels like a wistful lullaby with gorgeous yearning vocals. For a singer often accused (wrongly, I would say) of shouting rather than singing, this minimalist piece proves that Welsh can do emotion quietly and subtly as well as loudly and powerfully. Her particular vocal talents are a lot more varied than she is often given credit for, representing perhaps a basic prejudice against women singers who have powerful voices (no-one ever accused Bruce Springsteen of shouting on ‘Born in the USA’, for example), who can operate at full capacity and really belt a tune, not by screaming, but by sheer skill and lung capacity. Not for nothing is the first Florence + The Machine album called Lungs: she’s certainly in possession of a good pair of lungs she can use and her fans love her when she’s at full capacity.

Florence + The Machine have always gone for big album finishes, and closing track ‘Mother’ is no exception to the rule. This track is full on 60s psychedelic rock in the Jefferson Airplane or Big Brother And The Holding Company sense: the guitars are languid and drawn out, they swoop and swirl before coming together to rock mightily, which is mirrored by Welsh in her vocals. The whole approach screams Monterey Pop Festival 1967 and is Welsh’s most obvious salute to her heroine Grace Slick.

Overall, How Big, How Blue, How Beautiful represents a triumphant return for Florence + the Machine who have always turned out thematically tight, well ordered atmospheric albums with high quality songs. This new release sees them taking a slightly unexpected path, but it’s far from being a radical departure. A more mature collection, How Big, How Blue, How Beautiful is definitely a strong contender for album of the year.