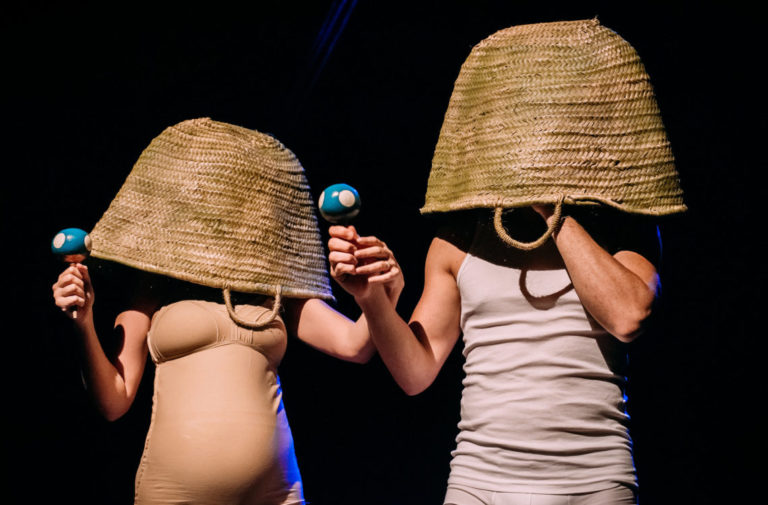 Fake It ‘til You Make It
Until 30 August, times vary, Traverse Theatre

Bryony Kimmings and Tim Grayburn are a couple. Six months into their relationship, Bryony came across a packet of citalopram and realised Tim was on medication for depression.

We see the cruelty of a world that silences men with regard to their emotions. Through recorded clips of an interview, Tim tells Bryony how he wouldn’t tell anyone or even type his symptoms into a search engine, while experiencing such emotional chasms that he was waking up crying. Words like “shame” and “real man” recur. It’s clear that Tim’s life has been immeasurably improved by being able to share his feelings with Bryony and it’s heartbreaking to think of him and all the other men who aren’t able to reach out because they don’t think it’s acceptable for men to ask for help.

It’s powerful because it’s true. The interactions between Bryony and Tim are genuine: she touches his arm to reassure him, he grins as she does something goofy. Tim was not a professional performer before this show but he is on stage now because he knows it’s important. In the final minutes, he performs a song. New to guitar playing, he is hesitant and it perfectly conveys the difficulty of communicating – but in the end, what he says is touching and allows us to understand his vulnerability. Although much of the show is threaded with humour and light-heartedness, by the end, the audience is in tears.

The Fringe run is currently already sold out but the production will also be at Soho Theatre in London from September.

Racheal Ofori writes and stars in this montage of monologues spoken by young black women. A versatile and observant performer, she is gripping to watch and fluidly creates an entire cast who vary believably.

The one recurring character is a disillusioned, cynical teenager, talking begrudgingly to the counsellor assigned to help her achieve her potential and take advantage of schemes aimed at minority ethnic university applicants. Ofori has created a character who articulates problems as she sees them. Perfectly imitating the slumped posture of an uninterested 18-year-old, Ofori asks why we can’t acknowledge that there isn’t equality between black and white people and criticises the patronising tone of the counselling she is receiving.

The other characters spring up as one-offs, ranging from a Ghanaian woman excited to start her life in London, to a posh and precocious applicant to Oxford, worrying about disappointing her parents and a North American preacher. They are played distinctly, with many segments in subtle and compelling verse. However, the inclusion of the couple of North American characters feels somewhat strange. Either the show should be focused on the UK or be more clearly internationally focused. As it is, the intent is sometimes unclear, even if the individual characters and speeches all excel.

Nonetheless, this is definitely worth a watch for an engaging hour of clever truth-telling from a talented individual. 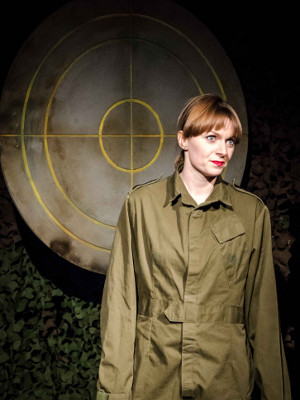 Rebecca Crookshank tells her true story of life in the Royal Air Force. Joining up as a 17-year-old, she brings us through training, passing out and her stint on the Falklands.

It is unclear what Crookshank wishes to do with this story. There are moments when she intimates that her experiences as a woman in the armed forces were different from those of men, to her disadvantage and distress. But there are other times when she tells us how fantastic the job was for her. While it is not uncommon to hold conflicting views on our experiences, this does make interpreting a piece of theatre more difficult. My best guess would be that Crookshank is generally positive towards the RAF but would advocate changes to the way women are treated. While this would certainly have been a fine conclusion, the lack of actual articulation of this lowers the potential impact.

Perhaps this is merely intended to be an interesting story. If that is the case, I can’t help but think that the recommendations and criticisms of a real ex-servicewoman would be pretty powerful; it is a shame that opportunity is not fulfilled.

Sue MacLaine and Nadia Nadarajah perform this show simultaneously: MacLaine in English and Nadarajah through British Sign Language. Once established, they use this to explore and try to untangle language while relating the story of a childhood trauma.

This concept works fantastically in questioning the meaning of meanings. Nadarajah shows concern about whether she is being understood through interpretation and if what is being said might be lost in translation. She fears the power of an interpreter, signing her unease. “Don’t interpret this,” MacLaine says calmly as she interprets.

The semantic search goes further. Quotations are used to express universal truths but are also criticised as cognitive shortcuts. The duck/rabbit optical illusion is applied to understanding of words. Finally, we are shown the linguistic trickery of repeating a word until it loses meaning.

While clever and interesting, these points are sometimes overstressed, to the extent that the underlying story risks being lost. However, this still serves to demonstrate the difficulty of vocalising traumatic experiences and, overall, the treatment is sensitive and touching. 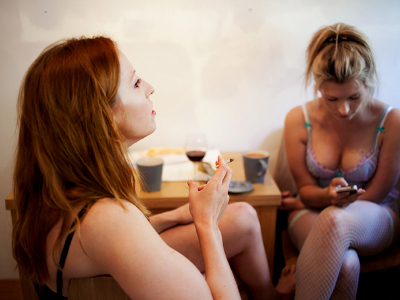 Led from ZOO Southside to the real venue, a flat ten minutes away, Hula House takes excellent advantage of its location. A piece about sex work, it imagines the flat as a brothel by the legal definition – that is, a place where more than one person is selling sex on the premises. Perching on a sofa in a front room, two women in underwear explain how ludicrous the laws around prostitution are, as they insist for legal reasons that the location is a performance space. This image makes the argument particularly impactful.

The two performers, Jenny Kondol and Sarah Xanthe, are personable and good storytellers. After an initial period of uncertainty, they make it clear they are performers rather than sex workers themselves. They seem to have researched the topic by talking to real sex workers or researching their accounts, giving them some claim to represent real experiences. However, a somewhat confusing speech in the middle undermines this, as Kondol states that she doesn’t really know what it is like to be in the position she is portraying but can imagine. Presumably she intends to ensure she is not taken to be speaking for other women, but it has the opposite effect; I was immediately concerned that the performance was borne out of conjecture rather than reality. “This is not my story, but it could be,” we are told on a number of occasions, leaving me wondering whether this is anyone’s story really. A short interlude of recorded testimonies that are presumably genuine are a helpful focus; however, the production, although punchy and provocative, could do more by extending an exploration of a wider variety of women’s stories.

The underlying concept of Boxed In is interesting. Production company Portmanteau interviewed women and men to find out how the expectations laid down in their childhood affected them later in life. They then created the show by combining these stories and introducing us to Jessica (played by Lily Beck) and James (Rose Wardle), 25-year-old twins who return to their family home as it is being sold, to sort out their childhood possessions.

Unfortunately, by combining the stories and not distinguishing between them, they lose much of their impact. Rather than witnessing how many people are affected by enforced gender roles in childhood, we see the lives of two otherwise privileged individuals, with only time to give fairly shallow accounts of each grievance. In the end, the main impacts identified are that Jessica misses out on promotion opportunities as she’s not confident in asking for more, while James struggles to communicate with his girlfriend about his feelings. It ends up seeming a bit simplistic when plotted out from action man to self-promoting businessman.

As the blurb is overtly feminist, I suspect most people who attend will already be onboard with the idea that treating children differently is likely to affect them. Therefore, the show needs something more to make an impactful point. 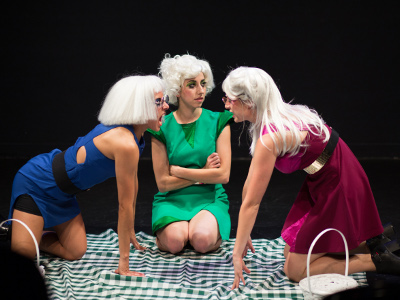 Future Honey is a newly devised tale of three women living in a future where emotions can be read and regulated by a machine. The programme fails, leading to a game that they must complete to return to normal, concluded with the need for a difficult decision to be made about keeping or losing the technology.

It is deeply confusing. An awful lot of time seems to have been spent on audio and visual effects, potentially at the cost of strengthening plot and characterisation. I have no idea why the game element comes in or what the point of the different stages is. I also don’t really know if the technology is good or bad, beyond making the assumption that most futuristic stories centred around new technology are warnings.

Interesting feminist themes, such as internet trolls and women in tech are touched upon – but barely. Five minutes before the end, one character expresses wonder at an alternative universe where women in tech are respected (although for the rest of the show she seems to have been a successful developer without any indication that gender is an issue). This topic is then immediately dropped.

While performed with enthusiasm, it is hard to see the point of Future Honey.

The Edinburgh Fringe Festival 2015 is running 7-31 August across the city.

Image 1: From Fake It ‘til You Make It, photograph by Mihaela Bodlovic. A woman and a man stand next to each other, both wearing woven baskets over their heads and holding a blue maraca each. The woman has her empty hand over the man’s hand that is holding his maraca, while the man has his empty hand under his head basket. The woman is pregnant. Both wear underwear.

Image 2: From Whiskey Tango Foxtrot, photograph by Cecilia Cooper-Colby. A woman in olive green overalls and red lipstick stands in front of a grey and yellow target on the wall. She looks to the right of the camera.

Image 3: From Hula House, used with permission. Two women sit inside on chairs next to a table that holds two cups of tea and a glass of red wine. The women nearest the camera is sitting sideways on her chair facing the right of the shot, smoking a cigarette. The woman further away is facing the camera but looking down at her phone. She wears fishnet stockings and lingerie.

Image 4: From Future Honey, photograph by Craig Hanson. Three women kneel in a horseshoe shape on a blue and white checked picnic blanket. A couple of picnic baskets are visible. All women are wearing white wigs in different styles and wearing similar futuristic dresses in different colours. Two of the women are leaning in and seem to be shouting at each other, while the one in the middle has her arms crossed and looks despondently between them.