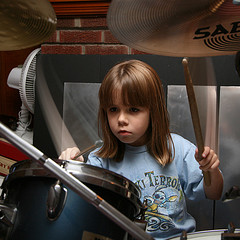 The announcement that Florence and the Machine were to replace Foo Fighters at this year’s Glastonbury festival was significant in more ways than one. Florence Welch, lead singer with Florence and the Machine, was the first British female performer this decade to top the bill on the festival’s mighty Pyramid stage and only the second act containing a female artists to top any UK festival bill this year.

To me, this speaks volumes about the gender equality that has not yet been been achieved in the music industry. You can pretty much count all the female acts – both solo and as part of a band, and of any nationality – to ever top the Pyramid stage at Glastonbury on one and a half hands: Suzanne Vega in 1989, Sinead O’Connor in 1990, Shakespears Sister in 1992, Skunk Anansie in 1999, The White Stripes in 2005 and Beyoncé in 2011. That’s a paltry six acts in 45 years, over 33 festivals.

But it’s not that male performers are just dominating headline spots – they’re virtually rendering female acts almost completely invisible across a variety of genres. According to analysis by The Guardian, the advertised bill for this year’s dance festival Creamfields contained only 3% of female acts. Rock and metal festivals Reading and Leeds and Download’s bills only contained 6% and 4% female acts respectively and even at pop-heavy V and Wireless, over 80% of the acts were male. The survey revealed that, in total, there were 2,336 men performing on stage and just 270 women. Statistics like this over recent years have left media and music critics to, quite rightly, question where all the women headlining or even performing at music festivals are.

The fact is that in a variety of genres, it’s still a novelty to see a girl in a band or performing as a solo artist outside of pop

Yet, much of this criticism has fallen on the festival organisers themselves, with suggestions that they aren’t selecting enough women to play, a move that largely fails to appreciate the larger industry structure that is playing into the gender imbalance. I find it highly unlikely that somewhere this year there will be a meeting of Glastonbury 2016’s organisers pondering over an equally long list of potential female acts to male and actively discriminating against acts that are either fully-female dominated or just contain a female member. The fact is that in a variety of genres, it’s still a novelty to see a girl in a band or performing as a solo artist outside of pop. More women aren’t headlining festivals because there aren’t enough female acts in the first place.

It’s because girls can’t play guitar, right? Well, statistically, girls are actually less likely to be able to play guitar, but only because they’ve never tried. According to a 2008 study by the Institute of Education of 5-16-year-old children in the UK, 81% of both electric guitar and bass guitar learners were boys, as opposed to 90% of harp learners being girls. The top five instruments for girls to learn also included the flute (89%) and the oboe (78%) and there wasn’t an instrument generally used outside of classical music in sight. If we’re fretting about why there aren’t more women performing at festivals when they are in their 20s, 30s and beyond, we need to look way before that and see that less women are even picking up an electric guitar in the first place. A 16-year-old female wannabe rock star in 2008 would now be 23-years-old and, if things went her way, starting to establish herself as a musician. If only 20% of women are learning instruments such as guitar and drums – those traditionally used in non-classical music genres – a few years down the line, that’s invariably going to reflect on festival bills.

That’s not to say female acts don’t exist at all. Florence & the Machine smashed Glastonbury this year, the ticket-selling powerhouse that is Taylor Swift and even newer bands, such as Wolf Alice, whose debut album went straight to number one when released last month, are proving that women can just as adequately make music that sells and draws a following across a variety of genres. But fewer women are even being considered as festival headliner material, because there are substantially fewer women, especially in non-pop genres, aspiring to that level in the first place, and the music industry, from the performers to the managers and music journalists, is still largely male-dominated.

Growing up, children tend to see men being rockstars and women being pop princesses

It seems unlikely that parents are actively denying their daughters the chance to pick up a guitar but, rather, it plays into a larger structure of socially constructed gender roles. From birth, there are certain colours, toys, professions and behaviours that are stereotypically associated with boys and with girls. Although I doubt most parents would say they consciously force their children into those roles, they are imbedded in society – when we shop for clothes, turn on the TV and, importantly, when we turn on the radio or open up Spotify. This lack of visibility has an impact on us all and accepted ideas about the roles and options available to different genders become more entrenched. Growing up, children tend to see men being rockstars and women being pop princesses. While there’s nothing wrong with that, it’s important to see these gender roles being reversed so there are enough role model options for kids, both male and female, in all genres, when following their musical passions.

If we want to see more women in music, we need to stop gender being attributed various characteristics or roles in the first place. Only then will girls be able to pick up the guitar, play the drums or sing in a rock band without the fear of appearing too ‘masculine’ or not ‘feminine’ enough by their peers. In five, ten, or (hopefully less than) twenty years, this can only mean the Glastonbury bill will be a more female-friendly place.

The picture shows a young girl playing drums, with a look of concentration and determination on her face. Image by Bart, shared under a Creative Commons licence.