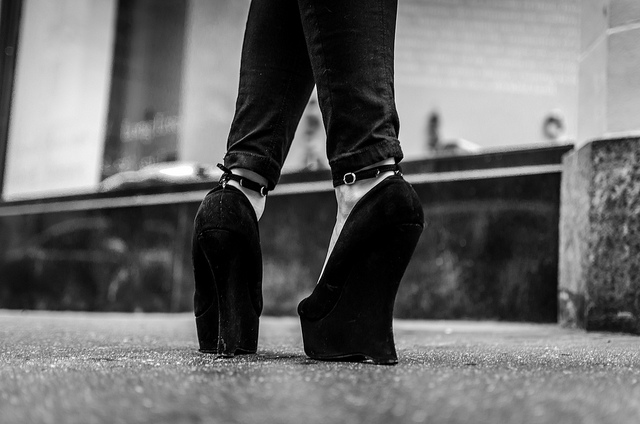 Why I refuse to wear high heels

Kerry Flint is a writer, feminist and digital consultant with fingers in lots of pies and an eye on the prize. Interests include sci-fi, cats and beer. Trying to combine them all. Web home: kerryflint.com 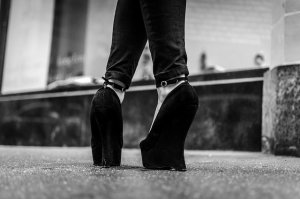 Corns, small lesions, toenails falling off, all of these things are definitely not sexy. So why does the media continue to tell us that heels are a “sexy look” when they cause such unpleasant side effects? Are period cramps and shaving rashes not enough for us to have to deal with without having to hobble about in footwear that has necessitated a whole blister care and pedi market?

Sadly we still have distance to cover (easier in flats) when it comes to tackling old-fashioned ideas of glamour, as exemplified when earlier this year women were turned away from the Cannes red carpet for not wearing high heels. With its anti-flats mandate Cannes has proven itself to be outdated because there is nothing more stylish than seeing a women look comfortable and happy.

Yes, many heels are like little works of art but spend eight hours running around in even the most conservative heel and you’ll wish you could chop your own feet off they hurt so much. The V&A exhibition, Shoes: Pleasure and Pain, celebrates the history of heels and if you note the use of the word ‘pain’ in the title you may well agree with me that the best place for these shoes is to be kept as ornaments to gaze at rather than walk in.

It was actually men who originally wore high heels; Louis XIV of France famously had a shoe collection that would make Carrie Bradshaw weep with envy. In the 1600s women started wearing heels too as a step (get it) to acquire some of the status given to men. Eventually men stopped wearing them altogether because they had been feminised and made to seem foolish.

In my own heel story it seems that common sense took me years to acquire. In my late teens I spent many years of tottering around seedy clubs in northern England, wanting to take the ice from my drink and use it on my black and blue toes before discarding my sketchy choice of footwear halfway home to risk getting a whole number of infections from walking barefoot down grubby urban streets. Finally, I bit the bullet and said no to wearing painful high heels, pretty much like also saying no to necking cheeky vimtos and getting off with guys who say they’re “in a band”. Older sometimes can mean wiser.

The good news is that despite what the media report this decision did not have a negative effect on my confidence or love life. Fashion magazines, that are geared towards telling women how best to attract any man – because, yeah sure, they all share one sci-fi style mega mind – often point out that wearing heels makes our ass and boobs stick out, our legs look longer and makes us
walk with a certain jiggle. Personally, I am ok with looking more like Daria than Jessica Rabbit and walking with stability rather than hobbling around on mini stilts. In my experience you can attract a man in a pair of DMs and you can walk away more quickly if he’s just not your type.

This is my personal choice and I am not saying that you can’t be a feminist if you wear high heels. Women have enough battles to fight – wage equality, consent, male violence – without condemning each other for what we decide to wear. Shave or don’t shave, wear make-up or don’t; it’s up to you. I am often mesmerised by those women who can glide over cobbles and climb spiral staircases in mammoth heels. It’s like watching someone levitate or eat a peach in public – mind blowing.

If wearing heels shows a woman’s strength and ability to overcome obstacles then why is it so horrific to watch when she falls in them? They can boost confidence on a special night out but wearing them day in day out has long-term effects that simply aren’t worth it. The media’s double standard around women and high heels is infuriating. One minute they’re saying how great a woman’s bum looks when she wears them (check the Mail for multiple examples) and next The Sun is laughing at women wearing them at Aintree: “some ladies struggled to maintain their balance and composure in high heels…a few appeared to give up altogether and were pictured in heaps on the ground”. Women are being sold something that supposedly empowers them but by wearing heels they are restricted and vulnerable to ridicule.

Of course a lot of these mixed messages have a lot to do with profits as shoes are a big business. Women’s high heel shoe designer and wearer of flat shoes, Christian Louboutin said, “Shoes for men are about elegance or wealth, they are not playing with the inner character. That is why women are happy to wear painful shoes”. So you can tell if a man is powerful and wealthy by his shoes and whether a women is flirty, fun or frigid by hers.

Fortunately, flats, flatforms and wedges have been having their fashion moment of late – thanks to the more innovative and modern designers. In the meantime, Jimmy Choo can keep his shoes and I can keep my toenails.