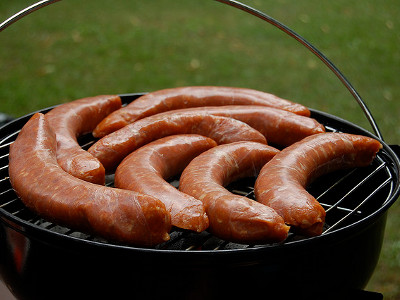 Recently, I’ve been trying to eat less meat. In my case, it’s for environmental reasons, but there are plenty of other good reasons why people choose to cut down or eliminate it from their diet altogether.

Being the sort of person who likes so few vegetables that people who have only just made my acquaintance frequently scold me on the matter, this decision has had its challenges. I’ve largely been prepared for these, pre-planning meals and gathering recipes to ensure I can make dishes I enjoy easily, and creating a points system to try to game myself into the level of reduction I want to achieve. I’ve actually been quite surprised at how doable it has been as long as I stay focused and don’t eat a slice of Pepperoni Passion just because it’s there.

It has been far more of a challenge to overcome my own pig-headedness (after all, you are what you eat). I respond badly to inferences that actions I’m taking are specifically because I’m a woman and, as I’ve always known but have been far more aware of lately, eating vegetarian food is for ladies.

Suddenly, I’m remembering all those occasions over the years when I’ve eaten with vegetarian friends who happen to be men, and I’ve been served the stuffed aubergine while they’ve been given the lamb chops. Or, more subtly, when I look in disappointment at the delicate, flaky fish dish in front of me while my boyfriend gets my burger.

This further reminds me of the times that I’ve been searching for presents for men in my life and, in moments of unsuccessful desperation, have browsed sites designed to pigeonhole people into the generic gift that a few labels lead to. As well as sports and beer, marketers have designated meat in the man’s domain – so even though you’ll find an array of kitchen trinkets in the women’s section, head to the men’s for meat thermometers, branding irons and barbecue paraphernalia. Recipe books perpetuate this; while a majority are by men (because as we all know, men are chefs while women are only cooks), any that are directed at men often heavily feature hunks of meat, either as the entire focus or at least the star of the cover.

Without realising it, for years I’ve been taking joy in countering people’s expectations. At some point earlier than I’m aware of, I had the idea that meat is manly planted into my head, and since then when I’ve asked for my steak to be rare, I’ve felt, in some small way, victorious. I’m challenging the status quo, aren’t I? Surely eating so many cocktail sausages at a party in primary school that my friend’s mother reported it back to my own parents, aghast, proves something? I am a woman. I am carnivorous. Can we just agree that the patriarchy is refuted now?

Yet now, in a way that I didn’t anticipate, I’m losing this act of rebellion (which was never intended to be a rebellion in the first place). I’m doing exactly what is expected of me. And I hate it.

At a recent wedding, the main course was roast beef. The woman serving made a point of giving the men an extra large portion of meat. I made a point of switching my plate with a temporarily absent man. Even though I was trying to cut down and the week had been going quite well, I was unable to ignore the bait.

There are two main things I’m taking out of this whole experience. Obviously, meat is weirdly and unnecessarily gendered. That means a host of men who would quite happily be vegetarian but never even try it (maybe never even think about it) because of the social ramifications. Conversely, it means women who will never know the joy of pretending to know how to barbecue, as they stick to mixing the potato salad and folding napkins. Overall, it just means a world where, once again, over the most seemingly banal and everyday activities, perverse influences affect how we act, when it’s possible we could be happier if we were doing things differently.

But something else important is the reminder that you don’t beat the patriarchy just by doing the opposite of what it dictates. In that way, you end up just as controlled by it as when you comply, while at the same time casting those who do act differently to you as problematic. Because of course there are plenty of women who are vegetarians and plenty of men who love meat. The key is to be aware of the ways in which we might have been influenced by sexist norms – and if we’re happy with our choices, the best way to fight patriarchy is to do our best to ensure that others are free to make theirs.

The image is by Stefano A and is used under a creative commons licence. It shows eight uncooked sausages placed on the grill of a barbecue. Green grass in the background indicates the picture is taken outside.