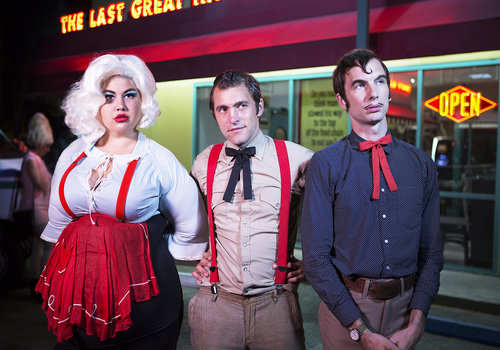 Happy as a clam at high water

Shannon and The Clams are a California-based indie garage punk trio. Their third album, Gone By The Dawn, was released on Hardly Art on 11 September; it’s an intriguing mix of 1950s rock’n’roll, garage rock and full-on punk, all delivered in a slightly subversive, camp manner and thoroughly suited to a post-hipster world.

Singer/guitarist Cody Blanchard and singer/bassist Shannon Shaw are joined by Nate Mayhem on drums and keys, and the three certainly make a lot of noise for a trio. They are, in the vernacular, a ‘tight’ band, polished and stylish with an intriguing line in subverted old-school glamour that chimes well in a world where tattooed and pierced punk girls can wear ’50s-style frocks without it seeming at all incongruous. While Blanchard is possessed of the perfect garage rock voice, Shaw is equally good at rock’n’roll and the pair harmonise beautifully over an album of songs of love and loss that are guaranteed to keep your feet moving.

Album opener ‘I Will Miss the Jasmine’ is ’50s-style rock ’n’ roll, complete with a Wurlitzer organ melody and twangy steel guitar. Shaw’s vocals are low and husky, and this is a song that could easily have shimmied in from the soundtrack to Hairspray. It’s both highly danceable and brief enough not to outstay its welcome. Meanwhile, the overwrought ’60s garage rock stylings of ‘My Man’ has more in common with ‘You’ll Lose a Good Thing’ and ‘Tears on My Pillow’ than ‘Jailhouse Rock’, but is possessed of a vocal by Cody that is rawer than vinegar on a wound. It sounds like a more rawk Tommy James and the Shondells doing ‘Louie Louie’ as a paean to man done wrong by man, or ‘Shaking All Over’ as a gay anthem.

The ’50s are not the only musical and style touchstones, however. The excellent single ‘Point Of Being Right’ feels as though it owes at least part of its innate hipness to the beat girls of the ’60s as to rock ’n’ roll. It comes on like Billie Davis or the Vernon Girls, and is married to a particularly nice gender bending karaoke themed video which only enhances its charms.

The emotionally charged ‘How Long?’ follows and features nice whistling and Shadows-esque guitars to begin, along with cooing vocals from Shaw. As a song, it slinks along nicely and there is a heartbreaking wail at the apex of it that grabs the heartstrings and yanks them good and hard.

By contrast, ’Baby Blue’ has an overall vibe of Buddy Holly-esque guitar pop, and feels very wholesome. Shaw and Blanchard harmonise impeccably on this song of a lovelorn man and his “little boy blue”. The result is crooningly camp and, while it feels a little slight compared to other tracks on the album, it’s nice enough.

The track ‘Corvette’ is louche, loud and stylish; it sashays across the floor while wearing a leather jacket and gobbing in the ashtray

‘It’s Too Late’ sees a return to garage rock, featuring impeccable thundering, thudding and echoing drums, which perfectly complement the rawkish vocals of Blanchard. It’s more ‘Shake Some Action’ than Dreamboats and Petticoats, with a good dose of garage rock.

Title track ‘Gone By The Dawn’ is a lovelorn ’50s ballad sung by Shaw, but with an edge that gives it a yearning, lusting quality; her vocals have an abrasive edge at times, while crooning at other moments. It builds up to a powerful and triumphant finish, whereupon it’s followed by the single ‘Corvette’, the most stylistically distinct track of the album. This features crashing steel guitar chords, which trickle along like prickles down your spine. Shaw’s vocal is neutral, but this only serves to enhance the songs’ sinister swagger. The overall effect is very disquieting, but while Shaw’s vocals are sung in such a low octave as to enhance this quality, the lyrics in themselves provide no sense of menace. ‘Corvette’ is louche, loud and stylish; it sashays across the floor while wearing a leather jacket and gobbing in the ashtray.

The guitar licks and light percussion of ‘Telling Myself’ suggest a sort of camp ’50s pop, whereas ‘The Bog’ is all fast, twangy guitars and galloping drums, with Shaw and Blanchard duetting on a garage rock ghost story, which seems to be equal parts southern gothic and Tam O’Shanter. The sense of atmosphere created by ‘The Bog’ creates a suitable entree to ‘Knock ‘em Dead’, in which the band ramp up the pace and deliver a nice slice of garage punk rock with all the trimmings: fast drums, fuzz guitars and the pace of the Ramones. This is ‘Blitzkrieg Bop’ distilled, with a side order of The Stooges and The Cramps, and they make it sound so very easy.

‘The Burl’, meanwhile, is another fast paced garage rock number and has gurgling guitars, clicking percussion, high girl vocals and low girl growly vocals. It has elements of the Girls In The Garage series of compilations, but with the emphasis firmly on a garage sound, not a girl group one. It concludes with pounding drums that are highly reminiscent of someone whacking a steel sheet with a mallet, which only adds to its charm. The album concludes with the twiddly Wurlitzer organ of ‘You Let Me Rust’, which twirls melodically above ‘50s guitars and drums, and blends very nicely with Shaw and Blanchard’s duel vocals. It has lovely harmonies and a fast, garage fuelled pace, all of which serves to finish off the album in a suitably accomplished manner.

Shannon and the Clams may be drawing on the sounds of the past, but they’re putting a thoroughly modern spin on those sounds and in the process creating something new and stylishly cool. This is a very strong album, packed with excellent songs, which is well worth a listen.

Shannon and The Clams play Oslo in London on 11 November and Sticky Mike’s Frog Bar in Brighton on 12 November.

The image shows Shannon and The Clams, looking very cool, standing in front of what looks like a ’50s diner at night. Band members are, from left to right, Shannon Shaw, Nate Mahan and Cody Blanchard.