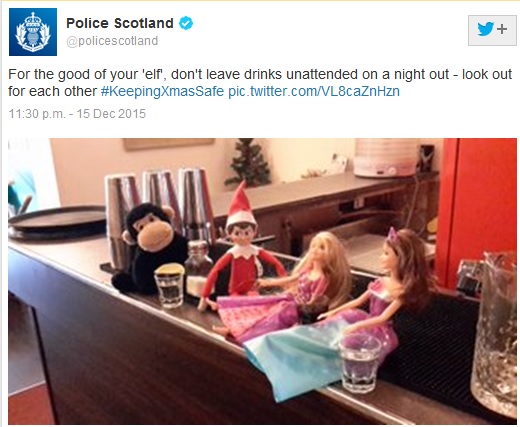 ‘Tis the season for “don’t get raped” advice

It’s that time of year again, the Christmas lights are on, the shops are heaving and we need to start watching our drinks in pubs. Police Scotland have launched their seasonal “don’t take risks” campaign with an ad about drink spiking and protecting yourself. Sure, it doesn’t mention the R word, but it’s all about not leaving your drink unattended because… if it’s not about rape then I don’t know? Someone might drink it?

I’m getting pretty sick of writing/talking/arguing that preventing rape isn’t actually the victim’s responsibility. But here we are, talking about drink spiking and protecting your drink. Seriously, police, stop it. I know you’ve got so much better at this not blaming victims thing, after all, you tell us often enough that women should come forward and report crimes, but really… you are not doing yourself any favours with this. I know, I know, you’ve used a festive pun, and not even mentioned sexual assault, but it’s not a flight of fancy to make the links between drink spiking and sexual assault.(If it really is an ad about taking care of an elf because they really don’t cope well with drink, then huge apologies.)

The reason feminists ask public bodies and others time and time again to really think about how they talk about alcohol and responsibility is because we live in a culture where society thinks it’s women’s responsibility not to get raped. Any sniff of alcohol throws everyone in a tailspin about whose fault it really is (spoiler: not the perp). Never mind the impact this has on reporting or conviction stats, the real problem with this “risk minimisation” approach is that it stops women from healing and it keeps rapists raping.

I know the arguments for taking a risk minimisation approach to prevention, we’ve had them time and time again – it’s not about blame, it’s about safety and it’s basically the same as telling people to keep their homes locked up and to zip up their bags.

But we cannot treat rape and sexual assault in the same way we treat the prevention of burglary or not being mugged, and for the last time, rape is not analogous to leaving your car unlocked. We can’t treat it this way because we are people, not inanimate objects.

The biggest risk women face in terms of experiencing violence is being a women. And the risk we face it from? People we know. That shit is scary. So what does risk minimisation mean when we acknowledge this scary truth. Staying in doors? Not talking to men? Come on.

But sure, if we’re all about risk minimisation as a way to prevent crime, what about men? We know that the biggest risk men face is violence from other men, so I’m assuming we’re going to hear about a brand new campaign telling men to keep themselves safe soon.

It’s not about short skirts, or alcohol, or risk minimisation – it’s about control, ownership and entitlement. Keeping an eye on my drink doesn’t change that. So this Christmas, eat, drink, and put the responsibility where it actually resides; with the perp, and no-one else. Not at Christmas, not ever.

Ellie Hutchinson is a freelance feminist writer, speaker and trainer. She’s been a rape crisis support worker, chair of Edinburgh Hollaback and a prevention and campaigns worker for a national domestic abuse charity. She works in housing and likes red wine, Channing Tatum and hanging out with her lovely friends and family.