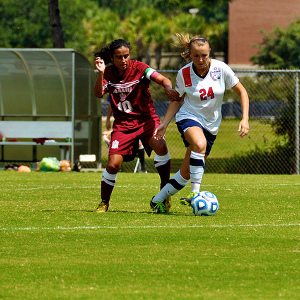 The rise and fall of the Lingerie Football League 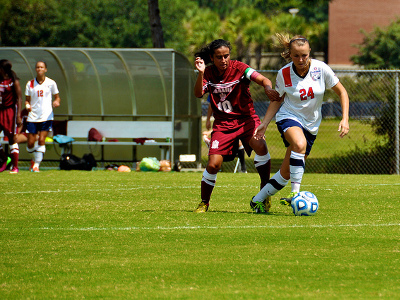 In 2005, the since-disgraced head of FIFA Sepp Blatter said he thought women footballers should wear tighter clothes in order to attract more attention and funding. Gemma Hughes followed Blatter’s advice by founding the Lingerie Football League. The concept is based on a false premise: that watching women play football in a crop top and short shorts will somehow encourage (assumed male) spectators to watch women’s football more. Yet men and women players alike used to wear tighter shorts from the 1960s to the 1990s, and, as one female player wryly observed, people didn’t pay attention to the women’s game back then either.

However, only a month after its launch, the LFL was banned by the Football Association (FA) in January. Hughes found out about the ban through a tweet from FA Director Kelly Simmons.

@KellySimmo1 can you confirm if its true you're allowing @lingeriefluk to play at SGP?? They're promoting it and raising money?

Hi no we are not and they've been instructed in writing that it will not take place at SGP. https://t.co/FaZ3NMndj0

In a press release, Hughes said, “I thought it was some sort of joke when I read the tweet from Kelly Simmons MBE FA Director on 17th Jan saying we can’t play. But when I received the email from JustGiving on Thursday 21st January 2016 saying we had been banned, I realised it was real.”

Multi-million transfer deals in the transfer window are a stark reminder of the yawning gap between women and men in the world of football. A top female professional footballer can earn up to £60,000, while top men earn millions. Hughes wanted to fight this disparity through the LFL.

She is just a year older than me. Her sentiment and motivations are admirable and the grievances she expresses were very real when I interviewed her over the phone two weeks prior to the ban. “It broke my heart that my local junior women’s team are playing their last season this year because they don’t have a pitch to play on,” she told me.

“The message up there right now is: don’t play football, you can’t make a serious living. It implicitly means it’s ok for women to be paid less. We’re saying women will run the league for the benefit of women.”

“Women’s football was being talked about on every radio station and national news programmes,” Tony Farmer, former manager of Chelsea Ladies Football Club and instigator of the petition against the LFL, told me on the phone. “2.4 million viewers watched a single game at 1am during the World Cup. The public is very aware of women’s football, and the Lingerie Football League is not only inappropriate but badly timed, for this reason.”

The petition was also supported by Women in Football, a network of professional women in the football industry.

We have signed the petition against the launch of a "Lingerie Football League" @hotelfootballuk https://t.co/huE5GWeU9e

The ban on women’s football was only lifted in 1971, after years of fighting for it to be lifted. “The true pioneers of women’s football,” said Farmer, “were the players and teams who refused to take no for an answer and forced the FA to lift the ban.”

“Their claims are actually insulting to all the players since 1971 who have worked so hard and overcome so much sexism and prejudice to drag women’s football to where it is today: professional top tier, weekly TV coverage and one of the fastest growing team sports in the UK.”

There is still, however, far to go. There are more supporters at Old Trafford for a weekly Manchester United game than the combined attendance of every Women’s Super League match of the 2014/15 season, Farmer told me.

Hughes said not enough has changed: “I want to see change in my lifetime.” I sympathise with her impatience. Women’s football should have grown more than it has, but to expect rapid change is to ignore the deep cultural and structural obstacles to women’s participation.

“We need media attention to get sponsorship and endorsement,” claimed Hughes.

But where is the sponsorship? So far the LFL has not succeeded in whipping up the media frenzy its founder expected, only succeeding in earning public disparagement from football linchpins. “It’s a knee-jerk reaction, it’s what I was expecting,” said Hughes of the backlash to her project.

Hughes justifies the aesthetic, saying, “In the professional game we’re imitating the men’s game. It should look like women’s football – the players should look like women.” But the concept of ‘real woman’ has often been used to oppress women who transgress traditional representations of gender.

The idea men will watch Lingerie Football League games because of the lingerie insults men’s intelligence as well. Men watch football games very regularly without needing to feel attracted to the players. Why should women’s football be any different?

The LFL protested the FA ban early this month at Anfield stadium in Liverpool, holding banners saying “Shame on the FA” and “The FA won’t let us play”. But the story of the British LFL seems to have come to an end.

The photo is by faungg and is used under a creative commons licence. It shows a women’s football game played outside at the University of Alabama, focusing on one woman running with the ball and another woman from the opposing team close behind her. Other players are indistinct in the background.