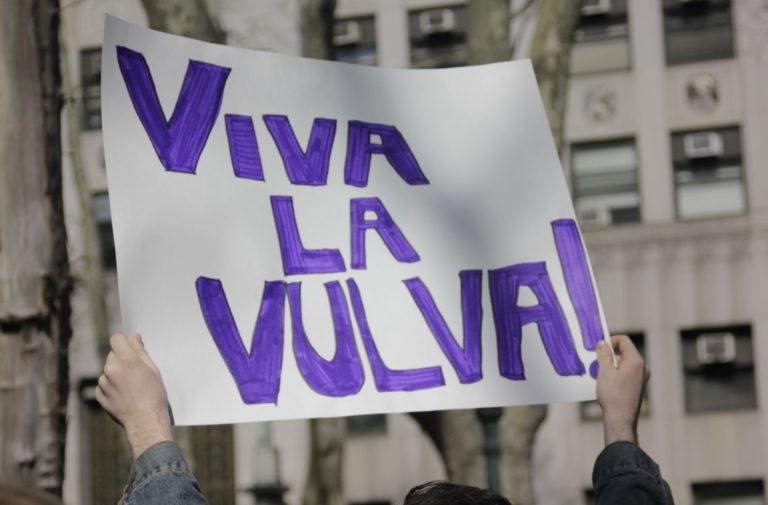 Please can we stop calling Jeremy Hunt a cunt

Catchy slogans get shared widely. That’s what’s happened with a photo of two doctors protesting against the proposed new contract for junior doctors which the British Medical Association says will lead to unfair and unsafe working conditions for doctors, putting patients’ lives in danger. The two male doctors hold a placard reading “I’m not a gynaecologist but I know a Hunt when I see one”. The photo was shared on social media by several friends of mine, all of whom are left-leaning and feminist-identifying, supportive of both the junior doctors’ strike, and of women’s rights.

My first thought on seeing the photo was that it was a humorous put down of Jeremy Hunt. A play on words; a clever pun. It made a political point whilst ridiculing the Health Minister. I’m not going to deny anybody their right to make fun of Tory ministers, especially when they’re threatening the NHS and workers.

Then I had second thoughts. Could this be, dare I say it, ever so slightly misogynistic? Didn’t the butt of the joke rely on the implication that cunts are Very Bad Things? It’s only funny that Hunt is being accused of being one, because nobody wants to be that: to be called a cunt is offensive, because to be one is undesirable.

But wait! Did that reasoning make me a prude? We’re all supposed to be reclaiming words these days. There’s absolutely nothing wrong with female genitalia – our cunts are not shameful – so why shy away from use of the word?

That for me is the problem. I don’t think we should avoid the word, not at all. Rather, I think we should use it joyously. We should celebrate cunts; not apply the term to people we find objectionable, thereby providing further ammo to the insidious view that cunts themselves are repugnant.

Wikipedia tells me that cunt is a “vulgar term for female genitalia, and is also used as a term of disparagement”. It’s one of the few words which really retains the power to shock; the feared ‘c’ word. Only one other sexual swear word has its very own letter dedicated to it – and the ‘f’ word is hardly considered scandalous these days. Of course there are swear words relating to male body parts. If we can call people dicks, and pricks, if we can say bollocks and balls, if we can refer to men as wankers and tossers (newsflash – women masturbate too – but this universal action is mostly rendered as gendered male when used as a descriptive), then why should ‘cunt’ be treated any differently? Why is there such a force to the word, which doesn’t exist for all those other anatomical parts?

It all comes down to how society views female and male genitalia – and unsurprisingly, society is pretty judgement and fearful of women’s bodies. We need to do something to change that: cunts shouldn’t be considered verboten. But continuing to use the word as a derogatory expletive is not the way to go about doing so.

Little cis boys are not taught to feel ashamed of their penises. They may fear that a penis is the wrong size or shape, or not performing adequately, but that’s because a functioning penis is seen as inherently desirable. The opposite, however, is true of cis girls, who are taught that their vulvas are worrying things, which should be hidden away and not talked about except when couched in euphemisms – most definitely not doodled on notebooks and scratched into walls, as is the vey publicly-acceptable penis. We say people have balls or spunk when we recognise their bravery or power. Conversely, we accuse ‘weak’ or ‘cowardly’ people of being pussies. This is symbolic of the huge disparity in the way society views cis male and female genitalia.

Here are some of the messages little girls routinely hear about their genitalia. Vaginas are said to be smelly. They’re too loose, or too tight. Labia get accused of being ugly, the wrong colour, asymmetrical, simply too visible. A clitoris is seen as a dangerous thing, and millions of women have suffered female genital mutilation because of the prevalence of this belief. Girls are told that they’re not allowed to touch and enjoy their own bodies, that their genitalia is dirty and shameful. This means that lots of cis women grow up with very oppressive feelings about their cunts.

And so you see, when we choose to disparage people by calling them a ‘cunt’, little girls grow up thinking that this is because cunts are vulgar: unwanted and unspeakable things. We need to reclaim the word ‘cunt’. We need to talk about them more openly, and to use the word more freely. But we need to do that in a celebratory way. Cunts are beautiful things. They’re soft and strong and warm, they can give pleasure and life. Our vaginas even self-cleanse – how cool is that?! Whatever you think about him, Jeremy Hunt is not a cunt – he’s nowhere near that awesome.

The image is by Timothy Krause and is used under a creative commons licence. It shows a sign reading ‘Viva La Vulva’ in purple letters, held up in the air by somebody whose body is not visible.

[This post and one comment was edited in July 2019 to remove the author’s name at their request.]