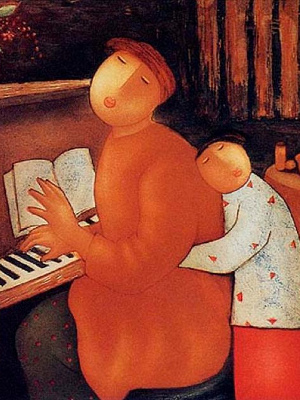 Feminism was something that happened in the Western world, not in Asia where I grew up. It never occurred to me that I could be a feminist. Where I came from a woman’s virtue was judged from her appearance and ability to be demure. Feminism to me was something that was practised by rich and intellectual white women.

I moved to the UK in the early 1980s when people spoke about Margaret Thatcher as a feminist. I laboured under the illusion that feminists were white women with power; ordinary women like me could not be feminists.

My daughter was born in 1999. All I knew was that rush of feeling that people talk about when becoming a mother for the first time hit me too. While I did not know it at that time I bypassed being a feminist in my own right and became a feminist mother with a vengeance, but then I was ignorant about the concept of feminist mothering.

As the months went by I started to notice the stereotyping and expectations of a girl. That gush of motherhood morphed into something more protective and was grounded in wanting to create a different world for my girl.

One night I felt very isolated, as new mothers sometimes do, and spent hours on the internet looking for like minded mothers. I found a website called The Motherhood Initiative for Research and Community Involvement from which I learnt that my style of mothering with all the aspirations and hopes attached had a name: “feminist mothering”.

Feminist mothering can either be defined as the opposite of the common understanding of mothering or on its own as a liberating style of mothering. Feminist mothering is a life strategy or an underpinning narrative that is both theoretical and practical. It fights against the common assumption that motherhood is a patriarchal institution whereby the child rearing is left to mothers in the domestic and private sphere of the home, her work is devalued but she must always strive to be a ‘good mother’.

While mothering requires sacrifices in order to put the child’s needs first, a ‘good mother’ is seen as someone who always sacrifices herself as a person in her own right and who puts her own needs last, perhaps even when this is not what would benefit her child. However, feminist mothering isn’t about being a selfish mother. It is about recognising the barriers that women as mothers face such as gender assumptions, class and race issues and understanding that mothering is not a homogeneous experience. Feminist mothering is about seeing mothering as a subjective experience and finding stories from these experiences that can be used to empower women.

A ‘good mother’, on the other hand, is often a stay-at-home, married and middle class woman. There’s nothing wrong with any of these, I hasten to add, but it is the detrimental stereotyping that I object to, because women on benefits, gay women and working single women can also be good mothers. Mothers are a melting pot and feminist mothering is an inclusive philosophy.

In contrast to my upbringing where women were expected to live by a common code drawn up by the patriarchy, my daughter’s life is characterised by personal agency, empowerment and self-awareness.

My daughter at 16-years-old is unlike what I was at her age. She is aware of her strengths and feels confident to assert herself and defend herself when challenged about not complying with stereotypical views. While I thought at her age that boys were always right because of their sex she does not think that men are endowed with superior powers.

Feminist mothering is a concept that meets the demands of the 21st century because it is comprehensive and inclusive enough to face contemporary problems such as inequality, racism, sexism and gender essentialism, among others. A one-size-fits-all style leaves out the evolving nature of mothering such as mother activism – for example, Cindy Sheehan and her role as “peace mom”, or mothers like me who took part in the Occupy movement.

In conclusion, Happy Mother’s Day and I hope today is a celebration of your subjectivity and a recognition of the diversity of mothers.

The image is a photo by Beth Scupham of a painting by Eng Tay titled ‘Mother’. It shows stylised characters; a mother sitting at a piano, one hand on the keyboard and one hand on the music pages, with a child hugging her from behind. Both have their eyes shut and look serene.