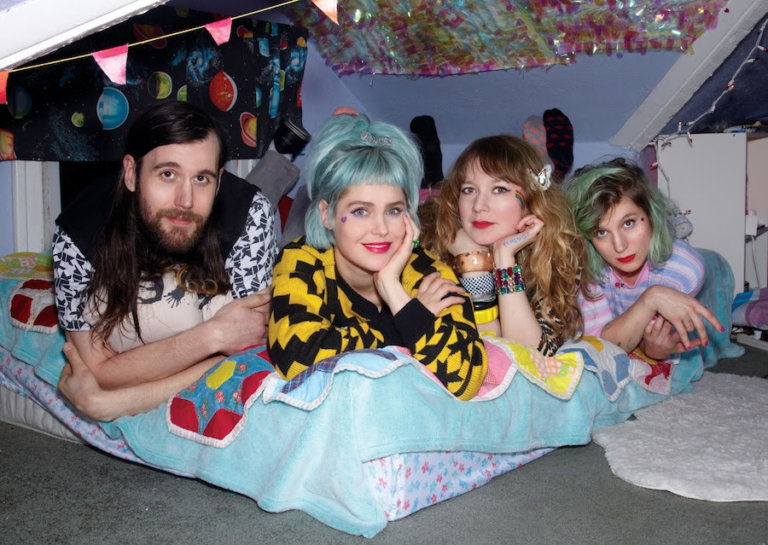 A brief history of time

Time is the central theme on this third album by Seattle punk pop band Tacocat. While it’s a subtle one that only really catches up with you at the end of the album, it does feel important to acknowledge the ways in which the band riff on the subject in pretty much every track on this album. There are songs here about time wasted at work, time wasted on the internet, time wasted inside relationships, time wasted by men boring the pants off you about stuff you already know…the list goes on.

Is this a conscious, deliberate theme or not? It’s impossible to tell from the supporting promotional material so we will have to make our own minds up, which is as it should be.

Tacocat are the sound of US high school slumber parties

Pontificating aside, this is an album of strong guitar hooks, riffs and perfect vocal harmonies. There is a sense of ease around the band; you get the impression that they could perform all day without breaking a sweat. While label mates Shannon and the Clams seem to be rocking more of a garage and surf edge, Tacocat, who seem to appeal to a similar audience, are the sound of US high school slumber parties.

Opening track ‘Dana Katherine Skully’ is a case in point. A playful power pop ode to the The X-Files goddess, it has surf guitars and a sort of hetic catchiness that is hard to resist. Given that it is followed by the slightly shouty, Go-Go’s-esque ‘FDP’, with its snotty refrain “FDP, don’t fuck with me!”, it’s easy to expect the rest of the LP to be like this: bouncy, snotty, power pop with punk and surf riffs. Both ‘I Love Seattle’ and the debut single from the album, ‘I Hate The Weekend’, with its accompanying video of candy strewn pyrotechnics and Frank Sidebottom homages, which only compliment the aural sugar rush, would seem to reinforce this.

There is absolutely nothing wrong with this approach. What the world is crying out for, at times, is a sunny, fun band making intelligent punk-infused power pop, who sound like the nieces of Bratmobile and – on the track ‘Plan A, Plan B’ – Bikini Kill.

‘Talk’ is a studied tale of a relationship being destroyed by an insidious, disruptive force: the smartphone

The pace lets up a bit with the excellently titled ‘You Can’t Fire Me, I Quit’, which strolls rather than bounces along, and might be a bit of a grower. ‘The Internet’ by turn is a relatively showy, choppy paean to online narcissism and insecurity: “What place do you have? What face do you have?”. The sense of despair in this tale of a society in free fall and the descent from inanity into internet induced atrophy is quite palpable.

The standout track of the album, ‘Talk’, is a studied tale of a relationship being destroyed by an insidious, disruptive force: the smartphone. Moody, atmospheric and full of tension, ‘Talk’ has a brilliant sense of claustrophobia, detailing a relationship collapsing in on itself. It’s a very modern theme, married to a classic post-punk infused tune, and in the tradition of all things good from Blondie through to Sleater-Kinney. This track is heartbreakingly good.

In ‘Men Explain Things To Me’, our heroine details in scathing tones the time wasted being bored rigid by know-it-all men about things she already knows. A classic two fingered salute to sexist bullshit, this is a riff driven, choppy, bouncy punk-pop song with a strong message.

Penultimate track ‘Night Swimming’ is bouncy and melodic, with nice guitar work and a sense of texture that helps it come across as both languid and pretty. The band are starting to wind down a bit by this stage of the proceedings and have decided not to leave listeners on a cliffhanger of surging, berserk, punk rock. This is brought home by the final track, ‘Leisure Bees’, which neatly takes us back to the beginning of the album, with surf guitar riffing through a salute to slackerdom, which also makes effective use of handclaps and nice melodies. Pressing the “play” button again will take you right back to ‘Dana Katherine Skully’ with nary a discombobulated sensation or pause, and to do so would be far from a waste of time.

Lost Time is out now on Hardly Art. The band will be touring the UK in early May. Find out more at their website.

The image at the top of the page is by Michael Lavine and features, from left to right, band members Eric Randall (guitar), Emily Nokes (vocals and tambourine), Bree McKenna (bass) and Lelah Maupin (drums). The four of them are laying down on a mattress, facing the camera, in what looks like a young person’s bedroom. The patterned sheets, wall hangings, colourful clothes and blue hair of Lelah and Emily make for a pleasingly colourfñl composition.

The video for ‘I Hate the Weekend’, which is embedded in the centre of the article, shows Tacocat playing a house party in a riot of colour. Each band member begins wearing large papier mâché heads a la Frank Sidebottom, which also double-up as piñatas. Each band members’ “head” is smashed in turn, exploding sweets over a gleeful crowd.