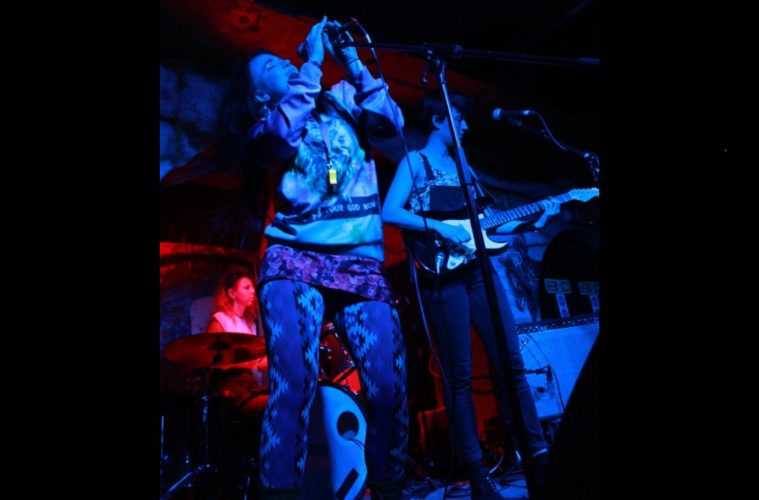 Dream Nails will fuck you up!

Cassandra Fox has a smashing night at the EP launch of the self-proclaimed “punk witches from hell”, Dream Nails

Dream Nails don’t mess about. The band have existed just six months, but are already selling out venues, getting stonking reviews in the national press and are now launching an EP. My gig companion Abi observes that if this was the 1980s and there was still a record industry to speak of, Dream Nails would have “A&R men crawling all over them”. Perhaps it’s just as well for all concerned that there isn’t and they don’t.

Before the music kicks off, I find the band arranging old-school zines on their merchandise table (with a new-school DL code stuck to each one). Making the best use of what’s available is an important theme throughout everything these girls do. Janey explains that in her work for a feminist direct action group supporting victims of domestic violence, she regularly meets women who have been stripped of all self-confidence by their abusers and repeatedly told that they’re useless and stupid, until they believe it themselves. “It’s so important to tell women that they’re even just good enough.”

If you can already play an instrument, this makes things easier, but if you can’t, don’t be discouraged!

Their zine offers tips on really useful everyday things: fixing your own bike, making your own peanut butter and, of course, starting a punk rock band. “If you can already play an instrument, this makes things easier, but if you can’t, don’t be discouraged!”

Next up is another very new band, Miserable Wretch, who set the joyful punk tone for the rest of the evening perfectly. Front woman, Sara, grabs the room by their ears – alternating sweet singing, visceral yells and a cabaret of energy. Amazing. She’s more X-Ray Spex than X-Ray Spex. The ska beat has everyone dancing and smiling, but the lyrics are pure anger and aggression, channeled in a most positive way. Her targets are the “Eton Stains”, the “SPADs” and, more generally, the patriarchy: “Check your white privilege! Check your male privilege!” she screams. (Her white, male band behind her keep the beat going, eyes to the floor.)

By the time Dream Nails take to the stage, the venue is bursting to the seams with a mostly-female audience, and everyone’s fired up. The girls begin the set with a surprise: their own introductory theme tune. “Dream Nails will fuck you up!” we’re warned, and we know we’re in for something a bit special. The band’s youth and inexperience belie their musical abilities: the sound is perfectly tight, polished and technically stunning. Anya plays storming punk guitar, and her complex solos – often the preserve of the ‘man band’ – are delivered with a wry “no bother” smile. Emmett’s bass is understated and funky, locked in tight with new drummer Lucy’s infectiously happy energy. Singer and front-woman, Janey, has a great voice – made all the more beautiful when joined on some songs with harmonies from Anya and Emmett. And all this tied together with a visible sisterly bond and camaraderie on stage. This is what feminism sounds like!

DEEP HEAT, ON YOUR DICK! SRIRACHA, ON YOUR BALLS!

The lyrics continue the evening’s theme of channeling female anger, stoking it and using it for positive action. The EP’s title track, ‘DIY’, takes on anthemic status: “You are strong enough, you are brave enough!” If the riot grrrls of the 1990s were leading women to protest against the patriarchy, these loud women of the ‘teens are inviting us to take direct action.

‘Vagina Police’ is dedicated to the young woman who was recently sentenced to prison in Northern Ireland for having an abortion. “The patriarchy controls every fucking aspect of our choices around having children!” Janey’s stage “chat” is eloquent, rousing and impassioned, having the effect of drawing the audience together in solidarity and raising our collective temperature, before launching into the next powerfully angry anthem. A hot room, packed full of women, jumping up and down and chanting along to “DEEP HEAT, ON YOUR DICK! SRIRACHA, ON YOUR BALLS!” Hats off to the male allies in the room who keep smiling through that.

Covers of Bikini Kill’s ‘Rebel Girl’ and the Divinyl’s ‘I Touch Myself’ are perfect additions to Dream Nails’ own great songs.

The end of the set comes too soon for the thoroughly energised crowd. Janey responds to the cries for more: “We can’t play more, we played all our songs!” This doesn’t assuage the mob though: someone at the back leads a cry of “DIY! DIY!” and the rest of the room soon join in. “Really? You want us to play it again?” The roof is raised with a resounding “YEAH!” and then raised further with a totally pumped up replay of the song, accompanied by massive grins and bouncy antics from the band: the perfect end to a perfect set. Dream Nails finally close with the directive to, “Enjoy the rest of your weekend: fixing your bike, making peanut butter and masturbating!” Damn straight we will!

Dreams Nails’ EP and zine can be purchased here. The band play a fundraiser for anti-domestic violence charities at the Fiddler’s Elbow in Camden on 14 May 2016. Check out the event here.

Photographs by Emily Stephenson. Both shots show Dream Nails vocalist, Janey, onstage, aside Anya on guitar and Lucy on drums, in the background. The group are bathed in blue light and in mid-set.

Cassandra Fox sings and plays in Thee Faction and The Wimmins' Institute and runs LOUD WOMEN - a DIY collective that champions women in music. She is also a mum of two young boys and works as a freelance editor. She occasionally tweets at @cassieefox