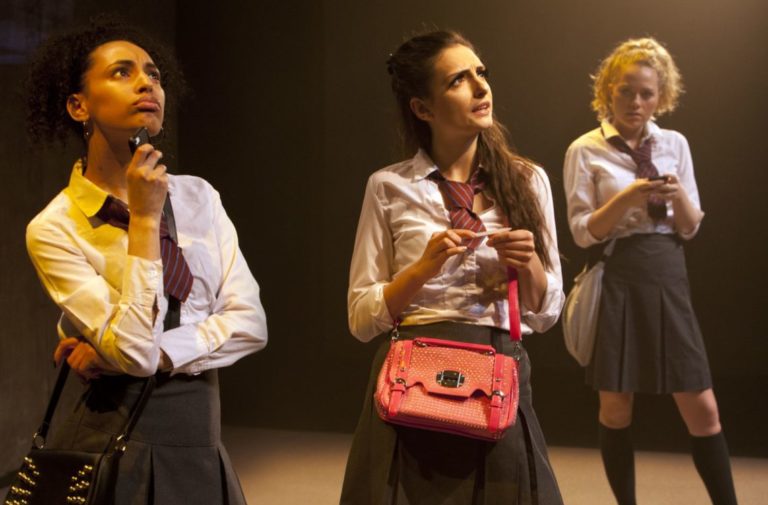 Teenage bullying in the digital world

A teenager in Ohio is currently on trial for broadcasting a live video of her friend’s rape. Explaining why she carried on filming the attack, the prosecutor said “she got caught up in the likes”, meaning the number of people watching. Hauntingly similar, Sket, which is slang for a promiscuous woman, at the Park Theatre shows how technology can fuel the abusive behaviour of teenagers.

On stage there are six actors playing 13- and 14-year-olds, three girls and three boys, at an unspecified inner city state school. They are hopelessly (un)supervised by their teacher, known only as “Miss”, who struggles to grasp the constantly evolving teen vernacular, let alone that her students are sexually active.

Daisy, desperate to look as thin as Cheryl Fernandez-Versini, is flattered into sending Julian or “JC” a naked selfie. Little does she know, JC’s friends Adam and Leo also see the image as, within seconds, does the whole school on the Whatsapp grapevine. Daisy’s friends, Emily and Tamika, immediately turn against her, distancing themselves from her shame.

Next, Emily, seeing how “Fat Katie” makes extra pocket money in the playground with sexual favours, follows suit. Soon she is inadvertently starring in her own widely shared video, and she too is ostracised by her friends. The sexual abuse becomes ever darker, until the tactics they have available to use in their teenage spats finally include rape.

There is a moment when the girls seem to realise that their friendships have been broken apart by the machinations of their male classmates. However, in celebration of their reconciliation they attend a street dance class, and the excruciatingly sexualised pelvic-pumping performance reminds us that objectification is in the air they breathe. A photographic exhibition accompanying the play shows real-life scenes of young teens socialising. Bland captions such as “children having fun together” jar with an obvious disconnection: in each image there is a phone holding the attention of one or more of the subjects.

Likewise, the staging of the play sees the characters stand in awkward lines, looking away from each other, and often towards a phone. The suggestion is that ‘social’ media does more to isolate rather than connect, which dampens their empathy for each other and allows cruelty to slip into their behaviour.

The playwright, Maya Sondhi, does not judge her characters of either gender; she shows that, though the boys perpetrate the sexual abuse, they are also victims of offstage forces, driving them towards a brutal form of machismo. JC, the malicious leader of the pack, is forced by an abusive older cousin to collect sexually explicit footage to keep the “hits” rising on his cousin’s website. Tamika bullies her friends when they experience abuse, adhering to the double standards with which men and women are judged for their sexual behaviour. However, she has been affected by her own trauma, which took place before the action of the play. All of the characters are trapped in bleak cycles of abuse. Each of them alludes to their dysfunctional family, who fail to offer alternative models of behaviour.

Sondhi puts her finger on a contemporary phenomenon not often seen in the theatre, even though for many it’s an everyday aspect of youth culture. The imagined events of the play are hellish but not far-fetched. With the advent of Whatsapp and Snapchat in 2010 and 2011 respectively, this kind of constant digital exchange is a very recent but widespread phenomenon, and little understood by yesterday’s schoolchildren. What used to be written on the lavatory walls to shame girls’ sexuality is now broadcast with photographic evidence to huge numbers at the touch of a screen. The digital divide has grown exponentially, allowing teenage savagery to come to full expression in a world invisible to adults.

Both images are courtesy of PMJ Productions.

The first photograph is of three young women wearing school uniform. They are standing on stage, in a row, with the two closest to the camera looking up and the one furthest away from the camera looking towards the other two. The woman in the middle is speaking and filing her nails. The other two hold mobile phones.

The second image is of two young women in school uniform. They are both looking at the same mobile phone. The one holding the phone is exclaiming with the other looking over her shoulder.