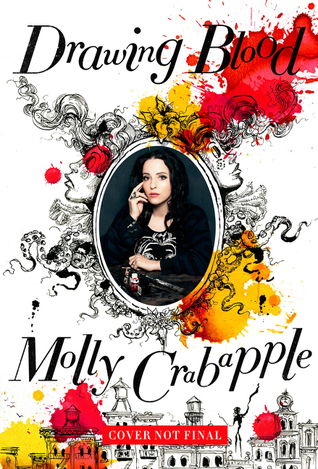 The story of a girl and her sketchbook Drawing Blood by Molly Crabapple is a kind of fierce, restorative bible that every teenage girl should keep under her pillow.

You should read Drawing Blood if you are an artist looking for proof that it’s all still possible, a writer sweating the long nights, a lover of literature looking for sumptuous sentences to savour, an angry teenager punching their way out of the suburbs or an adult fighting their way back into life. Crabapple’s story is one of grit, commitment and unapologetic ambition. It’s a manifesto for action.

Drawing Blood is a work of non-fiction, but it reads like a fairytale. The author’s writing is gorgeous, lush with metaphor and dripping with invention. What’s striking about her elaborate, romanticised tone is how authentic it feels. It may be part of the pose, but the pose feels real.

Crabapple leads us through her early childhood in Long Island, teenage travels in Europe and Asia and art-school poverty in New York City. Each stage of her life is described with arresting honesty. Her insubordinate teenage self is rebellious, but also dorky and embarrassing. Her reading is precocious, but she understands “every tenth word” of Nietzsche. She’s bold enough to go to Eastern Turkey, to meet PKK fighters and investigative journalists, get detained by Turkish police and endure continual sexual harassment. But she looks back on that bravery as a “sorry thing” – a way of using “other people’s homes as a proving ground”. She asks “if parachuting in for a few months implied I was tough, what did that make the people who lived there?” The spark that shines through Crabapple’s writing is a self-aware, self-deprecating understanding that injustices are larger than our own sense of outrage.

Whether she turns her eye on the anarchy of burlesque or the grotesquerie of rich banker boys, Crabapple can find something life-giving in any topic

Her honesty is especially electrifying when it comes to gender. For anyone who has felt the frustration of navigating the world as a woman, this book will read as a series of epiphanies. Lines like “no matter how far I’d strained against the rules for women, I was right back in my body, this fuckable, vulnerable shell” leap off the page. Readers across the world have surely shoved post-it notes here, where she writes: “I would never have the right to travel or to take up space. At best, I’d be tolerated by someone who’d demand sex as payment the second we were alone”, and dented the page with scribbled underlining as she writes “when I thought of every proposition or threat that I got just walking down the street in my girl body, I decided I might as well get paid for the trouble”. These insights are searing not just because they are accurate but because she throws them out like grenades, then speeds on to the next one. There’s no time in this narrative for victimhood or self-pity: these are the facts, she says, now let’s make some art.

Art is hard. Drawing until you can’t hold a pen is hard, battling for creative recognition is hard and fighting to keep your footing on a few square feet of New York real estate in an economy that scarcely recognises your work, is hard. Trivial to say, then, that Crabapple’s tale has plenty of hardship along the way. She eviscerates the myth that talent equals achievement. “It’s soothing lie,” she writes, but “any strawberry picker will tell you that hard work is a road to nowhere”. Instead, we have the long hours of modelling, dancing, performing, the dull pain of the high heels and the screaming hunger of being broke in a big city. We see the injustice of rich kids getting noticed while the un-wealthy and the un-connected serve canapés at their parties.

Yet in all of its sadness, Drawing Blood is never maudlin. Crabapple spills the pain of aborting an unwanted pregnancy, exploitation by corporations and the long and lonely hours working until her hands are numb. She never strays far from sadness, and yet there’s nothing sorrowful about this book. In fact, it’s humorous, irreverent, lusty and delightful. It’s intoxicated with life: whether she turns her eye on the anarchy of burlesque or the grotesquerie of rich banker boys, Crabapple can find something life-giving in any topic. Her humour sings and crackles off every page.

Crabapple’s left-leaning politics, her spirit of justice and empathy underpin her early life. All those conversations with her Marxist professor father and the protests against the Iraq War seem to chime with a larger sense of outrage, when Crabapple encounters the Occupy movement, and a girl with “a black slash of hair and a red slash of lips”: Laurie Penny.

In interviews, Crabapple calls writing this book “torture”, but you can’t see the bloodstains

Penny says “before you can be an artist, an activist – any kind of thinker – you have to be a girl first. And the right sort of girl, too”. Crabapple offers, “you’re always selling girlhood, one way or another”. Together, they wrestle with the madness of bank bailouts, the crisis in Athens, an absurd arrest, small moments of injustice tugging against a much larger landscape of global inequality. And then it all comes together. Crabapple’s way into journalism is so inevitable it’s beautiful. She writes about her anger, the protests and strikes all over Europe. She knits the personal and the political together into work that is both verbal and visual. She turns “painful bits of [her] past” into stories, observing that “they were art now […] they couldn’t hurt me anymore”.

One of the greatest pleasures of Drawing Blood is the way the author’s writing and her drawings share the page. They seem to say that to fill a book with either pictures or paragraphs alone is barbaric. They exist so easily next to each other, one could think this book just came into being on its own. In interviews, Crabapple calls writing this book “torture”, but you can’t see the bloodstains. The years of effort have created something smooth and seamless. So perfect, in fact, that it fulfils its own prophecy. As a student, Crabapple realised that “art and action could infuse each other. A painting didn’t have to hang in a gallery, dead as a pinned butterfly […] art could be gorgeous, engaged and political, working defiant magic on the world”. And her art does exactly that.

Drawing Blood is published by Harper and is available to buy HERE.

The picture used is an image of the cover and is from Goodreads (used with permission). A photograph of the author appears in the middle of the cover in an oval shape, with the appearance of a locket. The author has long dark hair and is staring directly at the camera, with one hand resting near her forehead. The background of the cover is white but there are splashes of red and yellow, giving the appearance of spilled paint or blood. The author’s photo is framed by intricate drawings, rendered in pencil or pen, depicting faces, tentacles and flowers. Along the bottom of the cover are drawings of buildings in the same intricate style.