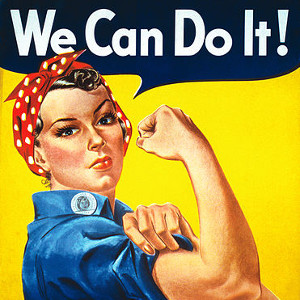 Everyone’s seen that vintage poster of Rosie the Riveter, famous during World War Two for telling able-bodied white women that they too could finally contribute to capitalism and Be Like The Men™. Thousands of feminists have read Sheryl Sandberg’s Lean In, which is a wonderful book if you’re that way inclined, but for many of us the generalisation that all women MUST start leaning in and climbing the career ladder is hard to swallow. Twitter accounts and articles dedicated to telling women that they can have it all abound.

I’m used to listening to feminist rhetoric that advocates total self-sufficiency and the aspiration of being the independent high-flying career woman who doesn’t need a man (or a bra). I like that image, but we need to remove it as a goal – and not just because it totally excludes non-binary people.

Having it all – career and family – isn’t everything. For some people it isn’t an option that appeals to them; while the role of housewife is a gendered position, I know many women and non-binary people who have chosen that very life because they enjoy the idea and find fulfilment in it. And, as long as they freely choose that life among the many options open to them, they are not being oppressed by living it.

Not all of us have that option.

Independent living is a wonderful thing. I should know; I used to enjoy it. But sometimes life doesn’t line up in the way that we had hoped, and being disabled can throw your life way off the course you intended for it. I’ve accepted that. I’ve accepted that I’ll never tick all of the strong independent person boxes, or the career bitch boxes, or even the determined parent boxes. I won’t even have the comfort of saying I’ve chosen to live depending on someone else like the thousands of feminist housewives I look up to.

Being hit so suddenly with myalgic encephalomyelitis (ME) has taught me a lot of things, but the main thing I’ve learnt is that being disabled in feminist spaces really sucks. I mean really sucks. When I was privileged enough to be relatively able-bodied, I should have done better for my disabled siblings. We all should.

Disability is not seen as an integral part of feminism for many people. We’re the afterthought, the well-meaning Equality officer making sure there’s a lift somewhere in the building and thinking that covers everyone. We’re the blurred out people on the periphery, unable to attend as many events, participate in all the marches and ever become that feminist icon who does what they want, when they want. We’re the cursory wheelchair user in the middle of the photograph that people use to pretend we’re all in the same boat. We’re fighting for the same thing you are, but we’re trapped a few years behind on the struggle to be seen as equals and whole people.

Sometimes Rosie the Riveter is used as a symbol of feminist struggle: “Yes we can”. We can crush the patriarchy. We can win this fight. We, disabled people, can be a part of it. I prefer this use of the image to one that advocates a path rather than a crossroad.

Holding women and non-binary people up to impossible standards is something we’re supposed to be avoiding.

The image shows the poster commonly referred to as Rosie the Riveter. An image of a woman rolling up her sleeves and flexing her biceps as a speech bubble reading “We Can Do It!” is above her. By J. Howard Miller, artist employed by Westinghouse, poster used by the War Production Co-ordinating Committee – From scan of copy belonging to the National Museum of American History, Smithsonian Institution, retrieved from the website of the Virginia Historical Society., Public Domain.