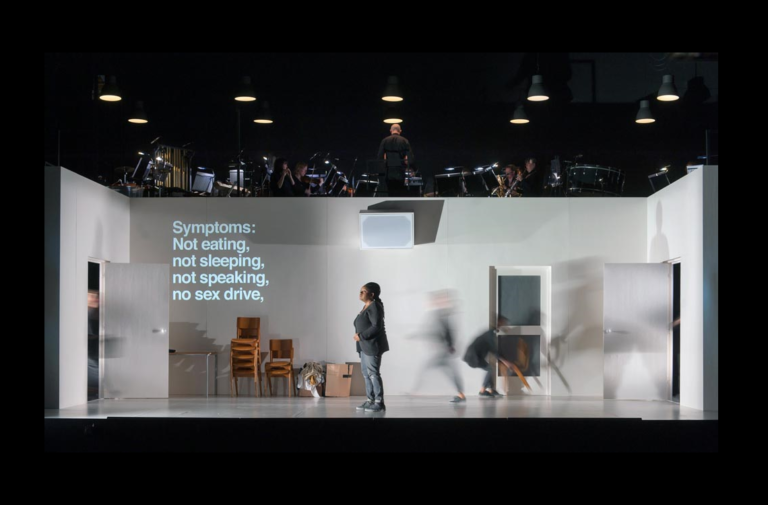 A howl in the darkness

Notorious for her controversial plays that deal with taboo issues, it is not surprising Sarah Kane’s 4.48 Psychosis has divided critics since it was first performed in 2000, shortly after her death in 1999. The Guardian’s Michael Billington asked “How do you judge a 75-minute suicide note?” while Charles Spencer of The Telegraph called it a “deeply personal howl of pain, a work ripped… from the core of her being”. Compared with the gut-wrenchingly bloody Blasted and Cleansed, which could each be described as theatre of cruelty, this play is a quieter, ruminative howl of desperate isolation.

Comprised of 24 sections, with no stage directions, save silence, 4.48 Psychosis is a prose poem describing a character’s descent into a severe depressive episode. It is honest in its depiction of mental health, as Kane unflinchingly shares her experiences of wanting to die, engaging in self-harm and experiencing difficulty in managing social relationships. Though some of the play’s themes are universal – loneliness, loss of a loved one, a difficult childhood and fear of abandonment – the close to the bone quality makes it an unforgettable viewing experience.

I saw this particular production at the end of May at the Lyric Hammersmith. It is a new opera, written by Philip Venables and presented by the Royal Opera House.

Taking the lead is Gweneth-Ann Rand, a black soprano who is deft in the physicalisation and audible anguish of her character. Under Ted Huffman’s direction with movement direction from Sarah Fahie, she is trailed by four doubles, all white, wearing the same clothes: loose jeans and oversized cardigans. At times they repeat each other’s lines in an extremely lyrical Greek style chorus. As BAME people in the UK are less likely to have access to mental health care, the casting adds an extra layer to a social commentary that is increasingly relevant under a weakening National Health Service.

The world the five central characters populate is a blank slate of white walls, with one clear exit and concealed doors, designed by Hannah Clark with lighting design from D.M. Wood. The space becomes different places through the movement of tables and chairs, slipping in and out of various settings as the patient seeks medication that works. It is a therapist’s office, a doctors’ surgery, a recreational room in an institution and a hospital, among others. As the cast rotate the furniture to suit the scene, Rand’s character goes from pillar to post to find someone who will listen or answer questions that aren’t by the book.

The use of visuals from video designer Pierre Martin is particularly strong. Specific sections of the text are written line by line, big and bold, on the blank walls. A recurring countdown and flashing between “RSVP” and “ASAP” – a dualistic state of being sociable and unable to function – indicate both social pressures and a technique once used by doctors, instructing patients to count backwards to indicate mental response.

In between the rising distress of the patient in the medical system and the cacophony of her entangled voices, the melodrama is punctuated by Philip Venables’ raucously inventive score, aided by sound design from Sound Intermedia. His orchestra embodies the human experience of a crisis in mental health, including muzak in the doctor’s waiting room.

The conversations with the doctor/therapist, played by mezzo Lucy Schaufer, are exchanged via a large drum (representing Rand’s voice) and a variety of instruments – from a hammer on a pipe to a snare drum banging out regimented, repetitive questions, with question marks indicated via a ‘happy to help’ bell ring – representing the clinical voice Schaufer stands for.

This clever exchange illustrates the bleak humour of Kane’s script and elicits spatters of knowing laughter from the audience. As the visits to the doctors’ surgery intensify, the walls become shopping lists of dosages and symptoms, finishing with the self-diagnosis of the frustrated patient. (Mood: fucking angry. Affect: Very angry.) Eventually, the relationship between Rand and Schaufer develops further: beyond the realms of the professional, but following a personal outburst from the therapist, it explodes before breaking down.

Kane’s familiarity with the medical system sees her using language directly from the Patient Health Questionnaire designed by Drs Robert L Spitzer, Janet B.W. Williams, Kurt Kroenke and colleagues. This self-report inventory is something the one in four people in the UK who have experienced mental health issues may well be familiar with. The questionnaire presents patients exhibiting symptoms of depression with a selection of statements and scores them based on how much they agree or disagree. Such statements include ”I feel that the future is hopeless and that things cannot improve”, ”I am bored and dissatisfied with everything” and “I am a complete failure as a person”.

The combination of intricate score and visuals in this production mean opera is the perfect medium for Kane’s freeform script. As the form itself is so heightened, there is no necessity for upping the ante in other areas. The words are allowed to speak for themselves, both visually and aurally. The text itself has minimal stage directions and is a monologue that assumes voices and emotions, giving an insight into the fractured psyche of someone in the throes of crisis.

As the play draws to an inevitable conclusion, the language exhibits religious overtones: abandonment by god and fear of dying and then burning in hell. A bright spotlight beckons – a promising redemption – mirrored by a booming church organ. But as the protagonist hurtles towards 4:48 am, a time when Kane herself often woke when in a depressive state, the spiral only deepens. It is a time that takes on an elusive quality, where clarity is present and salvation could be waiting, but there is only darkness.

Despite the undeniable tragedy of Kane’s suicide, this operatic rendition pays homage to not only the strength of her writing but also her refusal to glamourise or hide the debilitating symptoms of her illness. Her plays will always be relevant.

All three images show the ROH’s 4.48 Psychosis at the Lyric Hammersmith, a co-commission with the Guildhall School of Music and Drama.

Image one: this is a photograph of the whole stage. The bottom of the photograph is taken up with the set, a white box. Within this set there are six female performers, four of which are standing on wooden chairs with their heads and shoulders drooping. One is seated and one is standing up. Above and behind the stage are the orchestra who are mostly in darkness. The colours are muted, mostly white, black and shades of grey. There are many large shadows on the wall.

Image two: Gweneth-Ann Rand as the lead character of the play. She sits on a wooden chair with her hand on the back of it, looking to the right. She is wearing an oversized grey cardigan.

Image three: The top of this photograph shows a section of the orchestra. Four musicians are visible, the one in the centre of the photograph is cutting a piece of wood with a saw. Below them a section of set can be seen, it has white letters projected onto it which say “It’s not your fault.”