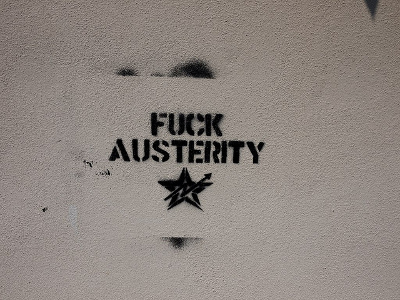 At the moment, the UK is still part of the United Nations (although who knows what Nigel Farage will set his sights on next after he’s finished reeling off supervillain soundbites to the European Parliament and realised that achieving his life’s ambition could make him obsolete).

Therefore, we should pay lots of attention to its decision that the UK’s austerity policies put it in breach of its human rights obligations. The concluding observations of its report notes that:

– the UK’s tax policies, which often penalise the poorest and reward the richest, inhibit equality;
– austerity measures have had a disproportionate negative effect on more marginalised and disadvantaged citizens;
– restrictions to legal aid are inhibiting access to justice;
– the Equality Act 2010 has not been fully enforced and is not applicable at all in Northern Ireland;
– asylum seekers are not supported and are overly restricted by not being permitted to work;
– migrant workers in particular are more likely to work in abusive working conditions;
– violence against women and girls with disabilities is not being addressed;
– the gender pay gap is significant;
– the National Living Wage is not sufficient;
– zero hours contracts are disproportionately impacting women;
– there are high levels of homelessness;
– more needs to be done to reduce reliance on food banks.

That’s just a taster. As you can see, it’s quite wide-reaching. But what I see here, broadly, is condemnation of an approach to running the country that does not consider that damage done to marginalised groups and is content to pay lip service to important principles while acting in a way that undermines our humanity. The UN is warning us about this. It is recommending that our government reviews its policies and works to limit the harm they are causing already disadvantaged groups.

This was published the same day that we heard the results of the referendum. These findings are, obviously, relating to a pre-Brexit UK. I wrote very recently about my concerns around leaving the EU, some of which related to a possible recession leading to more, deeper austerity and the removal of existing regulations to promote businesses’ interests over those of their workers.

When George Osborne finally emerged, a few days after the value of the pound fell off a cliff, he was as predictable as I’d feared.

Firstly, he took the opportunity to congratulate himself on the very measures that the UN is criticising. Thank goodness, he told us, that we had endured years of painful austerity (which some people probably found more painful than others, though he didn’t say that). This meant we were ready for economic catastrophe (such as, presumably, the downgrading of our credit rating, the very thing we’d been told we were having the cuts to avoid, yet the ratings were quick casualty of the market’s uncertainty about the UK).

And then he warned us: “It will not be plain sailing in the days ahead.” Unlike, presumably, the calm cruise we’d been enjoying on our diamond-studded yachts up until this point.

Later, he confirmed his expectation that the next Prime Minister will have to take further austerity measures to cope with the referendum fallout.

No. Nope. This isn’t good enough. Years of austerity have had a lasting impact. We’ve seen the slow continual crushing of a disempowered population, with a devastating swipe every now and then to a disadvantaged group, while the richest individuals and companies are appeased with tax cuts. And given that the referendum result is a strike against the status quo, some of the votes are likely to have been influenced by the effects of austerity.

We’re in danger of austerity becoming seen as the only way of dealing with economic downturns. Yet as the UN points out, the path that the UK has been going down is exacerbating inequalities and causing real hardship.

The photo is by Clayton Shonkwiler and is used under a creative commons licence. It shows graffiti stencilled onto a wall, reading “FUCK AUSTERITY”, with a star with an upwards arrow going through it underneath.