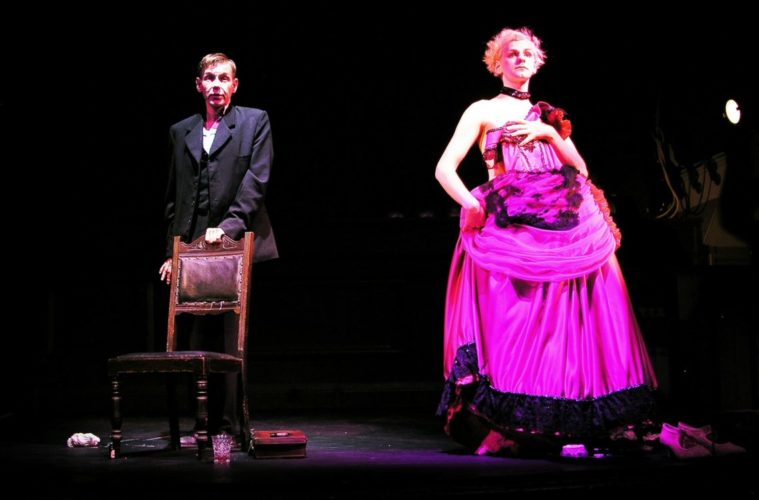 Mary Paterson reviews a double bill of STELLA and Adam’s Apple, both part of LIFT, and speaks with STELLA’s writer and director, Neil Bartlett

The figure on stage is so still and so small that, at first, you don’t notice him.

The audience files into their seats, chatting loudly, heads snapping round the room to see who is who and who is where. There is some confusion over the seating allocations inside Hoxton Hall, a restored Victorian music hall theatre with the intimacy of the period – cramped, in other words, by today’s standards. This is a room built for theatre without electric lights, sound systems or special effects. And this makes it the perfect setting for STELLA, Neil Bartlett’s new play. The music hall tradition, says Bartlett, “was always the art of the body. Music hall is about the performer walking on stage with nothing else except themselves to give to the audience.”

And then you notice him. Slim, neat, tidy. He is dressed in a three-piece suit, clutching a small bag, sitting on a stiff-backed chair. Waiting. His eyes are glazed over. He gazes above the crowd of heads. He has the air of someone who knows he is being watched, and is used to it.

STELLA is a play about a real person. Born Ernest Boulton in 1848, Stella was the name she took for the stage, for her lovers and, perhaps, for herself. It was not her only name: after her arrest and acquittal on sodomy charges in 1871, Stella changed her name, went to the USA and performed off-Broadway. The man who waits while the audience files into the auditorium is, in fact, Stella in one of her guises; “What people often miss out of the story,” says Bartlett, “is Stella’s final costume change.” At the age of 56, Stella died in the National Hospital in Queen’s Square, London; “if she died in hospital, she must have gone to her death in a pair of trousers.”

Struck by this detail, Bartlett has written a play that imagines moments towards the end of Stella’s life, alongside moments near the beginning of it. The young Stella (played by Oscar Batterham), and the old Stella (played by Richard Cant) are onstage together for most of the performance. They talk directly to the audience, delivering parallel soliloquys that become more complex and intertwined as the play continues. The young Stella anticipates her lover’s proposal, emotions bubbling to the surface as she tries to understand and protect herself from everything she desires. The old Stella considers, drily, whose hands will be the last to touch her skin.

Stella can never be contained in a category as simple as a name, a gender or a political class

Somewhere in between these two bodies and these two voices lies the identity of an individual. Together, they conjure ‘Stella’ like an apparition (or, perhaps like Pepper’s Ghost) – a collective idea that hovers above the stage, achingly real and heart-breakingly intangible. Stella dreams of being naked and free and loved. She wishes she could feel “not guilty”. She talks of herself in the third person. Stella, it becomes clear, can never be contained in a category as simple as a name, a gender or a political class.

Nowadays, Bartlett says, Stella would be known as transgender, although the term did not exist during her lifetime. Bartlett uses the term “gender transgressor”, and as part of his preparation for this show he spoke to people who live their lives in transgressive ways today. The bravery this entails, he says, is one of the reasons he was attracted to Stella’s story in the first place. “They’re people who say, sod it, right here, right now, I demand that this space is reorganised so that I can live, so that I can breathe.”

While gender is always a limiting label, for people who don’t have the privilege of ‘passing’ as one or the other of its policed, binary definitions, it holds a deeper type of violence. On stage, Stella and Stella reel from the sound of camera flashes, as if they are being punched in the face with each light of the bulb. Their appearance – the way they are seen, and the fact that they have to be seen at all – is both a matter of survival, and a life-threatening condition.

The ambivalence of passing is also a central concern of Thomas Carter Projects’ work in progress showing, Adam’s Apple, although here the approach is more optimistic. The ideas for this opera have been in development for a couple of years, but the showing on 3 June was the result of just four days’ collaboration between the creative team, including four singers, The Angels of Kaos choir, a lyricist, dramaturge, composer and accompanist.

The premise for Adam’s Apple is a voice clinic run by a researcher, Chris, who has only recently emerged from a stretch of private study. The clinic exists to help people train their voices, and Chris leads us through the issues at stake like an audience-everyman. To begin with, he is more interested in the physiology of the voice than its cultural implications. With the help of his three participants in the clinic, “a ciswoman”, “a transwoman” and “a biological male, gender unknown” (as Chris describes them in his notes), he begins to unpick the idea that a voice should sound like anything or anyone in particular. Adam’s Apple culminates in a crescendo of feel-good belters that translate Chris’s conceptual transformation into anthems for gender fluidity.

“Simultaneously the most powerful and the most invisible aspect of identity,” writes Adam’s Apple’s director, Polly Thomas, in the programme notes, “we wanted to explore the significance of voice and how it is heard.” In this, opera is an apt tool. Not only does it place voice at the centre of the performance but also, in periods of sung dialogue, it dramatises natural cadence. In this way, Adam’s Apple questions the ways that ‘masculine’ and ‘feminine’ are recognised as aspects of the voice, and, from there, as elements in an individual’s perceived identity.

The clashes that sometimes occur between transgender activism and feminism always seem to fall along the fault lines of individual experience versus the experiences of a collective political class. Like opera, class-based politics is a useful tool for revealing the structuring principles of relationships that we use every day. But, like Adam’s Apple in its nascent form, it is better at shaping the ground than mapping the nuances of the debate. At this stage, while Adam’s Apple is still working out how its elements fit together, its message is blunt: stop worrying about gender identity, start living your life. This is an important message, but feels more like the baseline for a conversation about (gender) identity, rather than the conclusion.

The play exceeds the parameters of any one debate

In contrast, STELLA starts from this premise and reaches outwards. The questions the play asks are universal: How do we live? How do we exist as our multiple selves? How do we change in a world that wants to know exactly what we are? But the way it poses them is intensely personal: Will he look into my eyes? Will there be a mirror in the room? How can I destroy a corset made of bone and metal?

While Stella’s refusal to fit into gender norms is the context for this exploration, the play itself exceeds the parameters of any one debate. It is not just about gender, then, but about identity as an ongoing process. Most touchingly, it is about the delicate and fragile experience of ageing: another entirely universal, and always personal, principle of being alive.

Stella and Stella are not identical. They do not look the same, they do not appear the same, and they do not have the same experiences. Perhaps they know, or perhaps they imagine, their other selves to be in the room as they look out over decades and difference. For all their careful, studied body language and precise use of words, however, it is not so much what Stella and Stella say, as how they listen, that develops their characters throughout the show. In a series of moving and heartfelt fragments, STELLA reframes conversations about identity politics away from appearance towards response. Side by side, Stella and Stella do not constitute a display of identity: two people asserting themselves in the world. Instead, Stella’s double, un-identifiable and unmissable presence creates a space for misrecognition, a performance of care, and a model of mutual responsibility. Their faltering and fragmentary conversation represents many lives, each used to being watched, each far exceeding what you can see.

STELLA is at Hoxton Hall until 18 June. On 16 June it will have British Sign Language Interpretation from Russell Aldersson. LIFT runs until 2 July.

The image is of STELLA, LIFT 2016. It shows Richard Cant as the older Stella on the left and Oscar Batterham as the younger Stella on the right. The older Stella is wearing a man’s suit and has her left hand on the back of an upright chair. The younger Stella is wearing a showy Victorian pink dress with her right hand draped across her chest. Apart from the two figures, everything else in the photograph is in darkness. Credit Dom Agius.

Mary Paterson is a writer and curator who works in London. www.marypaterson.tumblr.com