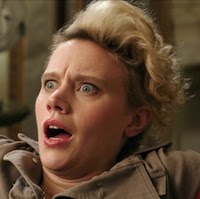 Ghostbusters is here and praise be it’s not shit. Heaven forbid a female reboot of a big film cherished by the little boy in so many grown men be anything less than its current 75% “fresh” rating on Rotten Tomatoes and drawn in $45m at the box office or director Paul Feig may have blown it for the female washes of so many more reimaginings to hopefully come. In a world where little pity is given to the financial failure of women-centric films, the opening week’s box office is important in beating down the path. That is why, as transparent as the strategy may be, we should applaud the marketing tactic of a Monday, rather than Friday, release (the film opened last Monday, 11 July). Those four days extra box office will have no doubt helped stack up the chips and given them time to lodge a gristly giant Stay Puft marshmallow man into Waterloo station, making the lunchtime nip to M&S that bit more entertaining.

Need proof of the pathetic willingness for the movie to fail? Google “Ghostbusters 2016 is…” and the suggestions you get are: “going to fail”, “going to bomb” and “is bad”. Thankfully, a chorus of praise for this giddy gal gang blockbuster emerges through the snarky tired remarks, especially from women who have rated the film considerably higher than men.

Simply put, this is good old-fashioned candy-flossed fun. There’s eye-boggling action, fanny fart humour and a placating soundtrack that’s a notch too high and a trumpet too much. It’s like standing in line for an Alton Towers ride knowing the 90 minute wait will lead you to a fast and easy thrill. But gents, fear not. There are ample nods to Ivan Reitman’s 1980s Ghostbusters and each one of the original cast, including Sigourney Weaver, pop up in winking cameos.

These 80s references are respectful but there’s refreshment in the nuance. The film is self-aware enough to know that 30 years on, the price of a disused fire station would make you choke on your Marathon bar. Reverse sexism at the expense of airhead receptionist Kevin (played by good sport Chris Hemsworth) can and will be used as an ebb of comeuppance for Dr. Peter Venkman’s slimier than Slimer hounding of Dana Barrett in the 1984 version.

Once again Paul Feig and comrade writer Katie Dippold provide a cast of women who sparkle with silliness, imperfection and hilarity. They have brains and balls and refreshingly, there’s no romance lurking in the plot beyond the platonic love between old best friends. Kevin’s ridiculousness far outweighs how beautiful he is and unless you’re the kind of person who gets turned on by pugs, an actual romance with this guy is laughable; the fair assumption that Kate McKinnon’s mesmeric Tank Girl-esque Jillian Holtzmann character is a lesbian isn’t given plot prominence either as guess what: who cares when there are ghosts to bust out there?

Spice World it ain’t. Fist-pumping feminism is thankfully missing and instead we’ve got a sci-fi action romp with an underscore of a buddy movie that happens to have women as the leads. However, there are recognisable themes scattered within the narrative that women have often had to tackle: it’s exhausting watching how much time the team spend on trying to prove themselves – even after saving the city from a supernatural invasion. Melissa McCarthy and Kristen Wigg, who were once best friends united by their ghost geekdom, find themselves shrouding their beliefs in order to be accepted to the educational establishments they work in – and both of them have men as their superiors (played by Charles Dance and Steve Higgins).

They also eventually cave to their name of Ghostbusters (what self-respecting group of women would actually call themselves that?). They cringe at the name the media has slapped on them them but as the name sticks, they own it – something of a familiar turn for any group of people who’ve found empowerment in their derogatory monikers.

Gender politics aside (and can we please have a world where an all-female lineup doesn’t scream “OMG! Women Are Taking Over The World!”), the new oestrogen-pumped Ghostbusters is this summer’s blockbuster. And if summer only really starts when Hollywood’s tent pole biggie is plastered on the side of the 73 bus, then Melissa McCarthy, Kristen Wiig, Kate McKinnon and Leslie Jones are standing by a picnic blanket stirring a jug of Pimm’s.

Ghostbusters is on general release now.

Both pictures courtesy of Bechdel Test Fest.
First picture shows four women in khaki-and-orange uniforms and sturdy boots standing in front of a white car with Ghostbusters logo on it. On the left there is a tall Black woman with cropped hair and a shorter white woman with glasses and her hair in a bun, on the right two more white women, first one with red hair and a fringe and the other with blonde hair and yellow tinted glasses. They look fierce and have some equipment on their backs.
Second picture is a portrait of a white blonde woman with yellow-tinted goggles pulled on top of her head, she’s drinking through a straw from a white patterned cup and smiling.