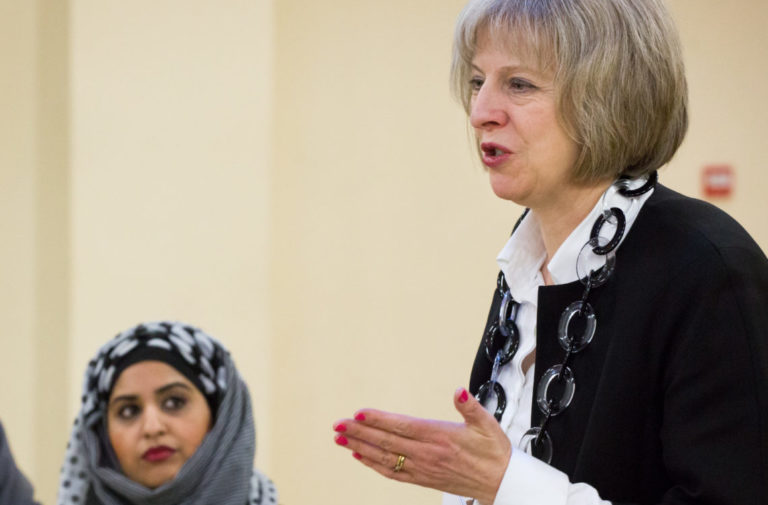 Theresa May is not my feminism

This is a guest post by Osha Al-Mossallami, a British-Egyptian freelance journalist currently studying MSc International Politics at the School of Oriental and African Studies. She tweets her feminist and political thoughts at @osha001

The UK recently found itself with its second female Prime Minister. Since then, some have heralded this to be a feminist-coup-d’état of some sort. Perhaps, if you are an austerity-loving-white-feminist – but for everyone else, we’re waiting on Malala’s FaceTime to confirm this is one big failed ploy.

Before going any further – and mainly to stop the ‘Why are you feminists never happy with anything?’ comments – let us get one thing straight: Is it a success to see a woman in this position of power?

Well, yes and no. Yes, if what constitutes your definition of a “feminist success” is merely symbolic. Yes, if you want to celebrate this woman for her gender and not her politics (ironic). And yes, if you want evidence that a woman can inflict the same gendered and racist policies that disproportionately hit women, minorities, and the less advantaged in society as her male predecessors. (Yeah, I lied, it’s mainly no).

Since May has become Prime Minister, I have become concerned with how desperate we must be to celebrate women if we are to herald this as a success. True, in May’s first statement in the role, she appears to be more socially conscious but her track record as Home Secretary makes me sceptical. Let’s not forget that this is the same woman who fed into the UK’s anti-migrant sentiment by literally getting vans to drive around telling immigrants to “go home”. The same woman who wanted the UK to leave the European convention on Human Rights, which not only protects victims of domestic violence, but also protects individuals from abuses of state power. The same woman who is refusing to reveal the extent to which refugee women have been sexually abused by the staff at the inhuman women’s detention centre in Yarl’s Wood. And the same woman I am now to celebrate as a triumph for feminism? No thank you.

We need more than someone who just looks the part. It is no good to be a woman in power if you are not going to help the women out of power.

Let’s be clear, we do need more women in politics. On a national and international level, the lack of diversity is shocking. But it is no good having diversity if the policies are as unjust from a woman as they are from a man. Pretty sure being told to “go home” as an EU national post-Brexit is going to suck whether it’s Cameron or May who delivers the news (although, you don’t have the solace of making a pig related quip with the latter).

But the idea that May’s appointment will now signify that politics is open for all women is superficial and flawed. Just recently, Nicola Sturgeon proudly tweeted a picture of herself with Theresa May with the comment:

Politics aside – I hope girls everywhere look at this photograph and believe nothing should be off limits for them. pic.twitter.com/QGZI3Cgw8d

My initial reaction when I saw this was “Yes, if you’re white!” This is the issue with celebrating the mere image. It not only omits May’s track record for austerity, which disproportionately impacts women meaning that it’s at the very hand Sturgeon is shaking that many girls won’t be able to achieve their ambitions. More so, the idea that this photograph can act as a universal galvaniser of confidence for all women, to me, reeks of white feminism. If you want all women, including women of colour, to feel like politics is for them, you should make sure your cabinet reflects that. As it stands, there are more men called David in May’s cabinet than there are MPs who are not white (there are three Davids, in case you were wondering). The image is not enough.

I don’t blame May for this – well, not entirely anyway. Instead, this lack of diversity has to be understood as a consequence of the manner politics is currently conducted. What would be a true feminist success is to not only see more women in politics, but more types of women in politics.

As it currently stands, women are only let into this “boys club” once they have been checked and screened. And when I say checked and screened, I don’t mean after they’ve downed a pint in 10 seconds and are seen as worthy enough to join the lads (although I hear this is one of the more elementary Tory initiations). Rather, I mean women are only supported and allowed to excel within politics once they have been certified as someone who will not upset the status quo – a status quo that was crafted within a context where only those who could afford to be MPs were, as it wasn’t until 1911 that MPs received a salary. Yet, this image of privilege has pervaded politics through acquiring other characteristics, namely male, white, Eton/Oxbridge-educated etc. For women to be respected, then, it has meant embodying characteristics and “speaking” the language of masculinity – something that was quite literal for Margaret Thatcher who infamously undertook speech lessons to deepen her voice.

This is not to insinuate that May has not worked hard to get to where she is, but to point out that politics currently operates in a way that keeps women who aren’t like May away from reaching top jobs.

It’s important that we recognise that. If part of the reason for your success stems from the comfortable assurance that you will continue to privilege the privileged, then there really is nothing feminist about you.

[The first image is a photograph of Theresa May, a middle-aged white woman standing and speaking. Looking on beside her sit two younger women wearing headscarves and a bearded white man. This photograph was taken by Daniel Leal-Olivas, is the property of i-Images and can be found on the Home Office Flickr stream. It is used under a Creative Commons License.

The image featured in the embedded tweet is of Theresa May and Nicola Sturgeon, two white women, smiling and shaking hands on the doorstep of a grand looking building.]