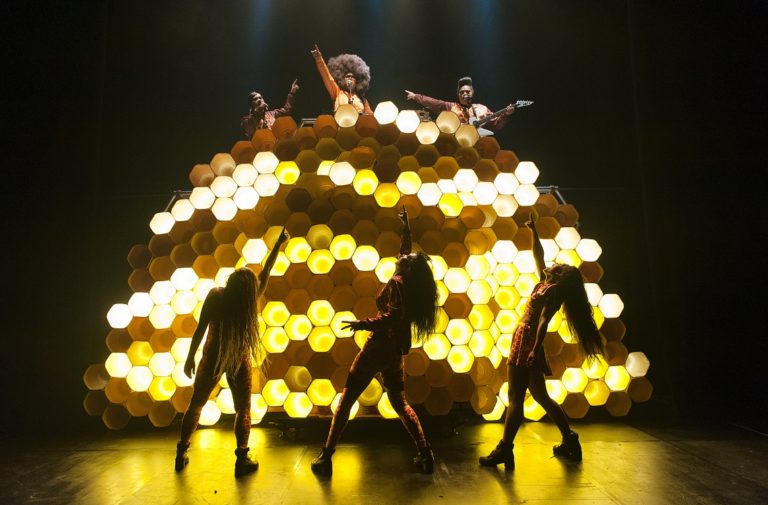 Theatre and Cabaret at the Edinburgh Fringe – part two Maria Ferguson’s solo show explores her relationship with food through spoken word, physical theatre, singing and dance. Ferguson is a very warm, charismatic performer who gets the audience on her side right from the start and deals very well with noise bleed from another space (a constant danger in all Edinburgh Fringe venues).

The performance is episodic, giving vignettes of Ferguson’s life and letting the audience fill in the blanks. Movement and dance form an important part of the performance: the story of a terrible hen night in Brighton is told through Ferguson doing Lindy Hop and working in a call centre as an out-of-work actor is indicated through rhythmic spoken word and associated arm movements. Ballet, musical theatre and drum and bass all feature.

The sadness of Ferguson’s experiences of bulimia and the unthinking cruelty of some people’s comments on her weight (“you don’t look like a dancer much”) are extremely well conveyed. However, I find myself wishing for just a bit more in terms of narrative and depth, as it moves along a little slowly.

Having said that, Ferguson’s love of dancing comes through particularly strongly and I very much enjoy the mixture of forms. And the Rope Still Tugging Her Feet (Theatre)
Until 29 August, 12:15, Gilded Balloon Teviot

Caroline Burns Cooke’s play is a one-woman dramatisation of the Kerry Babies scandal of 1984. Burns Cooke takes on multiple roles as she tells the story of a single mother erroneously accused of the murder of a newborn baby.

The play launches straight into the high emotions of the story, beginning with Burns Cooke crawling across the floor crying and praying. There are funny moments later on, however, such as the character of a Dublin radical lesbian feminist explaining the conservatism of rural Ireland in the 1980s while she swigs alcohol. Burns Cooke does a good job and it is a compelling performance. However, I would have liked just a little bit more differentiation in her characterisations, which are not quite distinct enough and lead me to lose my place as the drama moves from person to person.

The use of underscoring and light effects in a small room are very well done; I am completely drawn into this shocking story of misogyny, police corruption and the intolerance of the Irish church that happened well within living memory.

I leave feeling uplifted, positive and ready to fuck the patriarchy As Roxy Dunn’s two-person play begins, I am a little bit worried: the acting is quite broad and I’m not sure that the story of these two university friends (Dunn and Alys Metcalf) is going to hold my attention for a full hour. However, my worries are completely unfounded, as the play is much more interesting and clever than it first appears and Dunn and Metcalf have fantastic comic timing.

Dunn’s play is not just the story of two university friends and their ten years following a fortune telling at a festival; between each scene, the performers break off to tell us about the performance process, including a couple of nice gags about Brecht and references to Big Brother and Gogglebox.

There is the occasional problem; I really don’t think someone putting their tongue between their bottom lip and lower teeth and making a noise is an acceptable or funny way to refer to someone else’s mistake. It’s just disablist. However, the generally high quality of the humour and relevance of many of the jokes mean that this misstep doesn’t completely take away from the excellent writing or the committed and confident performances from Dunn and Metcalf. This is a very sex-positive and body-positive show. Six women of colour demonstrate what a world led by female power might be like, using spoken word, hip-hop, circus, ballet and twerking. It has high production values for an Edinburgh Fringe show, with multiple costume changes and a beautiful well-lit set indicating a hive.

Although burlesque has a proud feminist tradition, I am unused to seeing feminist ideals conveyed while women display their bodies and dance. This is a shame, and I’m glad this show so positively demonstrates the idea that, while the patriarchy might attempt to reduce women to objects, it’s still possible to have agency and power and retain ownership and enjoyment of your body. It’s also brilliant to see the concepts of cultural appropriation and privilege referenced explicitly within a feminist show.

I came in to the theatre slightly frazzled from rushing around Edinburgh seeking out tickets, venues and WiFi to post reviews, but I leave feeling uplifted, positive and ready, in the words of the performers, to “fuck the patriarchy”. Bea Roberts has created a very technical show. The stage contains a projector, OHP, television screen and multiple laptops. The story is told without Roberts saying anything. Instead, she moves across the stage, sometimes underneath a duvet, sometimes not, using sound files and visuals to tell an updated version of the story of Madam Bovary.

This all works incredibly well. In particular, the simple way Roberts shows a conversation – by projecting the words being said in sequence – somehow manages to convey the delivery and emotions of each of the characters. The number and range of different elements combined are extraordinary – a series of photographs of a journey, the pages of ASOS, a recording of local radio, plastic cups on the OHP, snippets of classic cinema and an INXS video; Roberts has taken bits of everything.

Roberts’ presence on stage, triggering everything, makes this still feel very much like a ’live‘ performance, despite it being nearly completely made up of pre-recorded material. I really enjoy this multi-media show, it’s unusual and accomplished and holds my focus for a full hour.

Image 1: From Fat Girls Don’t Dance, used with permission. A photograph of Maria Ferguson tap dancing. She wears black leggings and a top and has a checked shirt tied around her waist. The photograph is taken at a diagonal angle.

Image 2: From And the Rope Still Tugging At Her Feet, used with permission. It is a photograph of three Irish dancers. Only their legs are visible and they are in a row. Each has bare legs with white socks and black shoes with laces up their ankles. They wear colourful full short skirts. They are photographed in midair in the middle of a jump, their legs are straight with their toes pointing downwards.

Image 3: From In Tents and Purposes, used with permission. A photograph of both performers from the show standing in a field. Both have their hands at their heads. The right hand performer is putting on her sunglasses. The left hand performer has her hands a little further back and looks like she is having some kind of psychic experience.

Image 4 and feature image: From Hot Brown Honey, credit Dylan Evans. A photograph of the six performers on stage. Three women are standing on the stage itself, facing backwards, pointing upwards and with their heads thrown back. They are in front of a honeycomb shaped set on top of which stand the other three performers. The three on the higher level also are pointing in the air and the each have a microphone. The woman on the right is also holding a guitar.

Image 5: From Infinity Pool. The words “INFINITY POOL” in blocky black text are superimposed on an uneven white square which itself is against a black background. The whole image is blurry, as if it is under water.