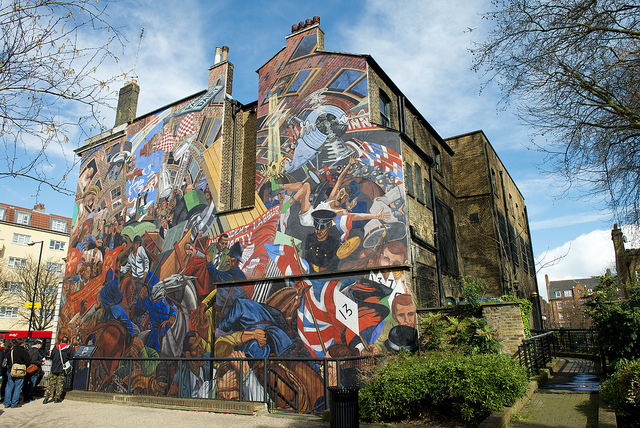 Welcome to another weekly round-up, where we share (what we see as) the most interesting and important articles and essays from the previous seven days. We’d love to hear your thoughts on any of the issues covered in our chosen links, which include everything from Cable Street and contraception to Elena Ferrante and Kim Kardashian.

Pepper to throw at fascists: the forgotten women of Cable Street (New Statesman)

From the article: “And I wasn’t the only one: it seemed the whole world had a delayed reaction. There seemed to be more of a concern of what this was doing for Kim Kardashian West The Brand, rather than Kim Kardashian West, the human being. Was it a publicity stunt? Then, nastier reactions: the NRA used her attack to sneer at anti-gun lobbyists. An ex-bodyguard has already piped up to say he’s ‘certain’ it was an inside job. Finally, the victim-blaming quadrant of the internet ushered themselves into the ring, the voices that said: well, if you will flaunt your wealth on Instagram, what do you expect?”

The Unmasking of Elena Ferrante (The New Yorker)

Kim Kardashian West, Elena Ferrante, and the Right to Privacy​ (The Cut)

More savage than Caravaggio: the woman who took revenge in oil (The Guardian)

How anonymity protects against female writing stereotypes (The Conversation)

Proportion of female judges among lowest in Europe (The Guardian)

From the article: “It’s hard to think in the heat of the moment, when you’re each firing responses back and forth. In the moment I was just like every other clueless ‘well-intentioned’ white person unable to see her privilege. The discussions sure didn’t seem ‘productive’ at the time. But often, after sitting on what was said over a few hours, a few days, maybe even weeks or months, I eventually realized that I was wrong, that I had been ignorant. Their point would finally sink in. I finally ‘got it.'”

Doctors, Witches, and Backalley Surgeons: A new study looks at how abortion providers are portrayed on TV (Bitch)

Sorry, Sally Phillips, but a woman should be able to know if her unborn baby has Down’s syndrome (The Guardian)

From the article: “And therein lies the rub: the idea that women should only have terminations for reasons someone else finds acceptable. How about if a woman feels too young to have a baby, or too poor, or doesn’t want to be tied to the man she conceived with for the rest of her life, or she doesn’t want a third baby, or any baby at all – are these permissible reasons for a termination? They are all pretty common ones. Or is it just a Down’s syndrome diagnosis that is deemed an unacceptable cause for an abortion? In more controversial areas, such as sex-selection abortion, the correct approach is to tackle the attitudes behind it, not ban abortion per se. Similarly, with Down’s syndrome screening what needs examining is the image around the syndrome and the way doctors discuss it, not the screening itself. It’s the attitudes, not the science, that’s the problem. Science is what gives women the choice.”

You can also read Huma Munshi’s interview with Ikoko for The F-Word HERE.

What Makes Call-Out Culture So Toxic (Films for Action)

From the article: “It isn’t an exaggeration to say that there is a mild totalitarian undercurrent not just in call-out culture but also in how progressive communities police and define the bounds of who’s in and who’s out. More often than not, this boundary is constructed through the use of appropriate language and terminology – a language and terminology that are forever shifting and almost impossible to keep up with. In such a context, it is impossible not to fail at least some of the time. And what happens when someone has mastered proficiency in languages of accountability and then learned to justify all of their actions by falling back on that language? How do we hold people to account who are experts at using anti-oppressive language to justify oppressive behaviour? We don’t have a word to describe this kind of perverse exercise of power, despite the fact that it occurs on an almost daily basis in progressive circles…”

‘I was so traumatised’: accounts of sexual harassment in UK universities (The Guardian)

Women ‘may understand concept of models’ (The Daily Mash)

“The Girl On The Train” And Women’s Dark Fantasies (Buzzfeed)

The image is used under a creative commons license with thanks to clogsilk on Flickr. It is a photo showing the vibrant mural that depicts the Battle of Cable Street in 1936 between the British Union of Fascists, anti-fascist groups and the police. According to the photographer, the image was captured during a Derelict London walking tour of Wapping and Shadwell.