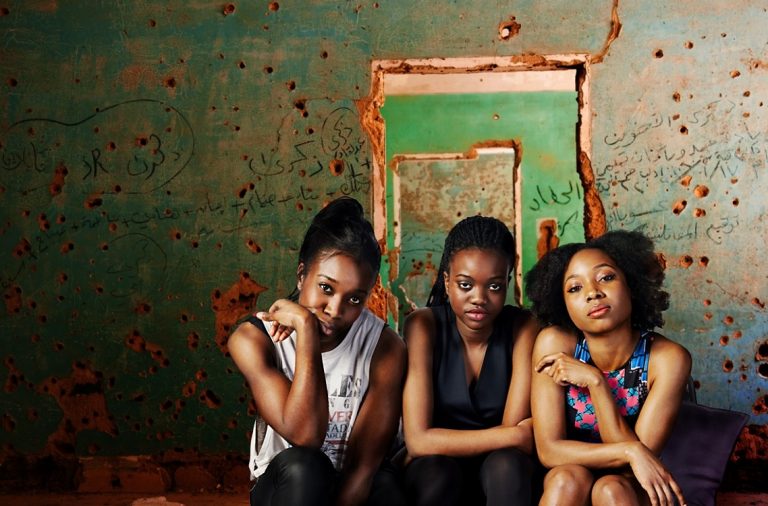 Girls is a fictitious story about female friendship, set in Nigeria. It touches on many of the issues girls face: love, sex and religion. But when the three girls in the play are kidnapped from their home, survival is all that matters. The play is funny and fiercely passionate about enduring friendship, the power of imagination and the stories behind the headlines that quickly become yesterday’s news. Interested in learning more about these themes and the thinking behind the play, I arranged to talk to its writer, Theresa Ikoko, in Islington.

We meet in the reception of a lovely building on Upper Street and I am immediately taken by Ikoko. As a writer and woman of colour myself, she utterly inspires me. Her ideas on activism, her authenticity and her need to create a different and better world all resonate.

I begin by asking Ikoko why she chose to tell this story. Ikoko speaks about her responsibility as a young, black artist and tells me:

I do feel like everybody, down deep, somewhere in you, there’s a seed in you that you want to change the world. And I guess there aren’t that many practical or realistic ways to do it, and sometimes I feel that that idea is suppressed by the magnitude of it. And I guess for us [artists], we feel that art can and should change the world.

Eloquently, Ikoko goes on to explain, “I always say that I think that art should make the world feel smaller, and if the world feels smaller then you just can’t help but trigger compassion, and compassion inspires action.” She goes on to reflect about “the media, and reporting, and […] the forgotten, selective storytelling”, pointing out that it is often “girls who are the unnamed and unseen parts of violence” and that she particularly thought “about some of the girls in parts of the world who are affected in the most extreme way by that [namelessless].”

Ikoko describes how in her writing she often feels that her characters and stories are revealed to her, elaborating:

And I wondered if other people enjoyed getting to know them, how that might affect them. ‘Cause I know that there’s this thing that they say that if you’ve been taken hostage, tell them your name, because there’s something about knowing, about making that human connection that makes it harder to cause you harm, or to find you disposable, or dispensable.

So […] if you know their names, do they become less dispensable to you? Does that protection that we have with distance, and with unfamiliarity, does that become reduced? And if that does, then what does that change, how does that change the human experience or the human condition? I don’t know if it does, but it’s just almost a curiosity, like I wonder if it makes a difference if we know this person?

When you belong to an oppressed group, I think you are born an activist, because your activism is survival

I ask Ikoko about the power of women’s friendships and what it means in this play. Her eyes light up and she says it means “everything”. She describes a song and dance routine that the actors have put together during the rehearsals and how emotional she felt watching it:

In support of this idea of sisterhood, Ikoko explains: “I went to the Edinburgh Fringe, and I watched this show called Hot Brown Honey, and it just completely changed my life. It’s this subversive, F the patriarchy, sisterhood, show of strength, feminine, feminist fest.” She adds with passion and a sparkle in her eye: “I’m so bloody glad I get to call myself a woman.” I ask Ikoko about her portrayal of women of colour, who are rarely represented as central characters. Was this something she was thinking about when developing this play? Ikoko answers that “When people think of Africa, they think of despair.” However, her own view is that, on the contrary:

There is pain, but it is without despair […] You’ll see the standard pictures of kids with flies on their mouths, but two seconds before that they were jumping in a river […] with the biggest smiles on their face, because we know joy.

She continues, telling me that Nigeria is one of the happiest places in the world. “So yes, there’s despair in an African woman and suffering in an African woman, but there’s also joy and hope and life and love.” She describes how it’s important to represent women of colour as more than just an image of pain.

As an activist myself, I am interested in the role it plays in Ikoko’s work. When I enquire about this, she says:

When you belong to an oppressed group, I think you are born an activist, because I think your activism is survival, right? […] Because we have to actively live. There isn’t the privilege to just glide by, and for life to happen, and carry us along. We have to act on life.

Ikoko then explains that she isn’t sure that she was consciously writing a piece of activism with Girls, but that also “our lives as black women are political” and “our truth is activism, because our truth isn’t […] the standard tale of our story.” This is also apparent when she later tells me:

I don’t have an agenda, but I have a responsibility. And I think in every portrayal of blackness or womanhood, which are the two groups that I most proudly belong to, I feel responsible. And I don’t want to let my sisters down of any shade, and I don’t want to let my brethren down, of brown shade […] We are very, very, very rarely afforded the opportunity to tell our version of our lives.

People are constantly adding another layer of human to themselves

We go on to speak about whether changing minds can change the world. Ikoko says she thinks they can, but in her writing she’s not always sure she’s doing enough. “I think there will always be this thing in me that feels like I should be, and I could be, doing more”, she says. We agree that Alice Walker’s assertion that “activism is the rent I pay for living on the planet” is very meaningful for us. As Ikoko says, “You want to earn your space.”

Before we part company, I ask if Ikoko’s day job in criminal justice complements her playwriting. She says it does and that she “get[s] to meet such a variety of people. People that I would never have naturally crossed paths with, which I think constantly challenges my idea of the world and of life and of people.” We talk a little more and she adds:

People are constantly surprising me. People are constantly adding another layer of human to themselves, which does I guess feed into my writing, ‘cause I like it when my characters surprise me now […] We are so, so complicated as human beings and so unpredictable, but then also, in another vein, we’re also very […] similar.

I leave the interview feeling invigorated. I love meeting other writers who are passionate about bringing about change in the world. Writers like Ikoko are making a difference by giving voice to a story people might otherwise forget. I am glad to have had the opportunity to hear and amplify her truth.

Girls is debuting at the Hightide Festival at Aldeburgh in Suffolk until 18 September. It then will play Birmingham Rep Theatre from 20 to 24 September before coming to the Soho Theatre in London from 27 September until 29 October. At Soho, the play will be captioned on 14 October and audio-described on 18 October.

Both images are courtesy of Soho Theatre and Theresa Ikoko.

Image one is a portrait shot of Theresa Ikoko. She is a woman of colour and has long dark curly hair. She is looking directly at the camera and looks like she is thinking and might be amused.

Image two and the feature image is the show image for Girls. Three young women sit in a room looking directly at the camera, unsmiling. They are just to the right of the photograph. Behind them is a bullet marked wall, it is painted blue-green and has graffiti on it. There is a rough doorway behind them with no door in it, it leads in to another room which is very similar.