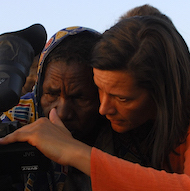 The power of the cameraperson Kirsten Johnson may be the secret glue holding the universe together; she’s certainly documented enough of it. At the very least, as cameraperson to the stars of American documentary, she’s holding together a superhero group fighting for truth and justice. But, unlike most superheroes, she’s also a genuine, complex, goofy human being. It’s not many documentary films, after all, that start with the director sneezing loudly from behind the camera. We see and hear trees blowing in the wind in Bosnia, eloquently speaking of both local histories and global forces, and then, off camera, there’s that sneeze: snapping us into the body (and mind) of the person making the image. Cameraperson is full of such off-kilter moments that remind us we are watching a film with a filmmaker making it. Rather than pushing the viewer out of the film, they bring us in deeper by asking what it means—in an era of ever-increasing surveillance and image-making—to wield the power of the camera.

The sneezer is better placed to ask and answer that than almost anyone currently working: as well as directing her own documentary, which won the Grand Jury Prize at Sheffield Doc/Fest in 2016, Johnson has worked as a cameraperson for leading American documentary directors such as Laura Poitras, Michael Moore, Kirby Dick and Amy Ziering. Cameraperson is a meditation on her work, telling big-picture stories about human rights, social justice and international politics, through documentaries such as Fahrenheit 9/11 (Moore), Citizenfour (Poitras), The Invisible War (Dick and Ziering), Audrie & Daisy(Bonnie Cohen and Jon Shenk, available on Netflix) or Pray the Devil Back to Hell (Gini Reticker).

In a quintessentially Cameraperson moment, Johnson tests her own ethics against her toughest viewers, the film’s subjects, while she’s standing right there in the room

Whether you’ve seen the films or not, Cameraperson shows them – and through them, the world – to you in a new way. Hearing two women’s voices talking off-camera about whether they might get in trouble with the soldiers outside a prison they’re covertly filming is thrilling. It is a gripping piece of cinema even when you don’t know it’s Johnson talking to the fearless Poitras during the making of The Oath, while securing information about its subject who had worked as Osama bin Laden’s bodyguard. Johnson is one of the few prominent female cinematographers working in American cinema and will also become only the sixth American female director (after Allison Anders, Chris Hegedus, Miranda July, Lena Dunham and Laurie Anderson) to have her film released on DVD by the highly rated Criterion label. Outside the films with Moore and Poitras, her work has focused on feminist issues and subjects. This includes Dawn Porter’s urgent and deeply upsetting documentary Trapped, about punitive abortion laws in many southern US states, and Catherine Gund’s exhilarating Born to Fly: Elizabeth Streb vs. Gravity, about the incredible lesbian performer who dangled dancers off the London Eye in 2012 (listen out for the clip from this film, which is audible long before the amazing performance it documents is visible). Most tellingly, clips and outtakes from the 2011 PBS TV series Women, War & Peace (including Pray the Devil Back to Hell, about female peace activists in Liberia) are woven through the better-known cinematic documentaries.

All home movies have a political dimension, where a meal or conversation may have unseen dimensions linked to questions of colonialism and globalisation

Johnson returns frequently to the Women, War & Peace episode I Came to Testify, which she shot mainly in the village of Foča in Bosnia, the site of a rape camp set up by Serb forces during the Bosnian war in the early 1990s. She interviews survivors and investigators, as well as the only Muslim family still living in the area. As we see towards the end of the film, a few years later she goes back to show the family her film, and watches them watching it. It’s a quintessentially Cameraperson moment, in which Johnson tests her own ethics against her toughest viewers, the film’s subjects, while she’s standing right there in the room. The viewer’s reading of the family in Foča has also been changed since the first clip from I Came to Testify. This happens through not only meeting them repeatedly—including in a nerve-wracking scene in which Johnson has to decide whether to drop the camera and intervene when three small children start playing with an axe outside their farm—but also by meeting Johnson’s own family: her late mother, who had dementia, and her father who is looking after his twin grandchildren. The family in Foča and Johnson’s family in America mirror each other, suggesting that all documentaries are, in some way, home movies and intimate stories. All home movies have a political dimension, where a meal or conversation may have unseen dimensions linked to questions of colonialism and globalisation. An American filmmaker with an internationalist outlook, Johnson creates striking juxtapositions and continuities in the film: between a lack of access to abortion services in the US and a brilliant midwife coping with hospital equipment shortages in rural Nigeria; between testimony from Foča and footage from a Penn State football game, shortly after the sexual abuse story had broken about the team’s former coach. Racist and gender violence in America come under close scrutiny, set against evidence of US military violence in Afghanistan and Guantanamo Bay.

Yet the film is far from gruelling: throughout, courageous, funny, emotional, compelling people stand up to violence and talk about survival and resistance – like the women chopping trees for firewood in Darfur, calling soldiers who chased them from their homes “osaranga” (“bastards”, according to the subtitles). The interpreter asks them to repeat this, and they do, again and again, laughing and swinging their axes. Franz Kafka said: “A book must be the axe for the frozen sea within us.” At a time when many of us feel frozen by the encroachment and depredations of the right, globally and locally, Cameraperson is just the axe we need, to free us to think about how we and the truth can survive.

Cameraperson is in selected cinemas from Friday 27 January, distributed by Dogwoof, check out the list of screenings.

Sophie Mayer will be in conversation (on Skype) with Kirsten Johnson at Bertha Dochouse on 27 January.

All images courtesy of Dogwoof.

1. A white woman, with dark hair in a bun atop her head, wearing jeans and a short-sleeved dotted top, holding a small video camera, is in the middle of a crowd of black women wearing traditional colourful clothes. White woman is facing left as if she wanted to move forwards to change her position. It’s Kirsten Johnson shooting in Rwanda.

2. Two women stand behind the big camera propped up on the ground. The woman on the right is white, with shoulder length dark brown hair and a bright orange jumper (Kirsten Johnson), and she is urging the woman on the left, who is black and older and wearing traditional colourful clothes, to look into the camera. A production still from Darfur Now (2007) shoot.

3. An older white woman smiling at the camera somewhat coquettishly, wearing a shiny polyester lavender shirt and a head scarf on top of her white hair. She’s pictured in what can be a kitchen, with a small fridge behind her. It’s the grandmother of the Muslim family from Foča.

4. A black woman with her head covered with a white cap and wearing a white top with some colourful motifs, with her mouth ajar, pictured against a while tiled wall. It’s unnamed midwife in Kano, Nigeria.